(Not) Just Another Love Story? 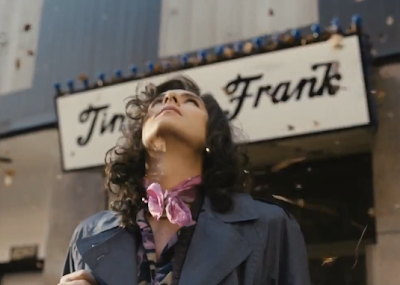 Laurence Anyways heralds the third feature from young Canadian director Xavier Dolan. It’s the dawn of the 1990s in Montreal, and Laurence (Melvil Poupaud) and Frédérique (aka Fred, played by Suzanne Clément) are, on the surface anyway, as happy a couple as can be. Everything changes when Laurence reveals that, feeling overwhelming and uncontrollable urges, he’s planning a sex change. Fred is taken aback, but after deep consideration decides that she’s going to stick with Laurence through his transition and beyond. Unfortunately the relationship grows increasingly strained, and Fred suffers a mental breakdown as a result of professional and personal stress. The two ultimately part ways after Fred has an affair. That’s not the end of the relationship, though, and over the decade that follows it seems that Fred and Laurence just can’t let each other go.

Weighing in at nearly three hours, Laurence Anyways takes its time telling what is, at its core, a relatively straightforward doomed romance. Initially, the reactions of friends and colleagues to Laurence’s sex change make for particularly fascinating viewing. His students and fellow teachers appear to actively support his newly public crossdressing, while Fred’s sister (Monia Chokri) and Laurence’s mother (Nathalie Baye) react with a confused hostility that makes for some awkward dinner table conversations. As the film presses on, however, it begins to hit a lot of disappointingly formulaic plot beats and almost wearily inevitable character developments. The film doesn’t always convince that its expanded runtime and decade-spanning scope is completely necessary. The film takes itself very seriously indeed, and a lighthearted moment or two wouldn’t go astray in a film full of angst and romantic melodrama.

A handful of subplots – such as Laurence’s friendship with a group of ageing drag queens and spinsters – add further narrative bulk where bulk is far from needed. Still, the story is generally intriguing, and like the most memorable cinematic couples Laurence and Fred are a non-traditional and likeable duo facing seemingly insurmountable barriers to their happy ever after. And Dolan, to his credit, pulls off a beautifully emotive final sequence – or, more accurately penultimate sequence, as its bookended by a slightly redundant flashback epilogue. Poupaud’s portrayal of Laurence is likeable – thoughtfully capturing the essence of individual dealing with society’s uncertainty over his / her lifestyle choices. But it’s Poupaud who is the real star, displaying a wonderful emotional range and depth as poor conflicted Fred. It’s truly majestic acting, and worthy of the accolades that have already been bestowed upon her.

Dolan boldly directs as if this is the last film he’ll ever be entrusted to make. The film - like The Artist, Meek's Cutoff and Tabu before it - is shot in classical academy ratio, which is seemingly undergoing a strange niche resurgence at the moment. A combination of vivid visual design and dreamy pop music selections assure that, stylistically speaking, the film is rarely boring. There are several hypnotically realised setpieces – the frenzied lasers of a dancehall, a startling confrontation in a café, a carwash revelation and a windy farewell are amongst the film’s grandest stylistic achievements. The film generally shows a brave aesthetic ambition that is difficult to begrudge – although, as is often the case with films that go for broke stylistically, there are some moments that come across as unintentionally silly rather than beautiful. Still, even when the film struggles in terms of narrative, you can rest assured Dolan, his cinematographer Yves Bélanger and art director Colombe Raby are at least putting an awful lot of thought into the look and atmosphere of the film.

Laurence Anyways shares many of the flaws and strengths of its French Canadian comrade Café de Flore from earlier in the year (although on the whole Dolan's film emerges as the superior production). Both genuinely pulsate with visual enthusiasm and pop-heavy soundtracks, but they also recount their offbeat romances in an over-ponderous and over-extended manner. Nonetheless, Laurence Anyways has more than enough going for it to warrant a viewing. If it fails to achieve greatness, it is partially down to over-ambition, which is hardly the most objectionable affliction a film can suffer from.
Posted by thecynicalgamer at 8:19 PM