The Killing of a Chinese Bookie (John Cassavetes, 1976)

This article is part of a year-long feature - watching and blogging about twenty acclaimed, cult, challenging and rare films over the course of 2013. The full list of films (and links to other completed posts) can be found here. Seventeen: Ben Gazzara becomes involved in The Killing of a Chinese Bookie. 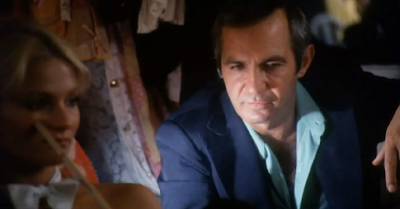 The Killing of a Chinese Bookie's title precedes it. For many years, every time I stumbled across such an incredibly distinctive name, I found myself endlessly intrigued by by it. More than any other film on this list of twenty, it had been occupying a high position on my 'to watch' list for the longest time, based on the name almost alone (that, and several filmmakers I admire cite Cassavetes as a major influence). But, for whatever reason, it was not a film easily accessible here in Ireland without importing, and general laziness meant I never bothered to throw it into a shopping cart whenever I was ordering films from overseas. Thankfully, the BFI were decent enough to re-release a generous Blu-Ray package a few months ago, affording this one viewer the chance to finally easily procure a high quality copy of this relatively elusive film

(FYI: I watched it in its original longer form, although the debate over which cut is superior is deeply intriguing, and I will endeavour to view the notably remixed alternate version)

I have an awful tendency to always write more than I ever intended to, but in this case I am hopeful I can keep things brief, as ultimately The Killing of a Chinese Bookie is a film that feels precarious, but ultimately just works in ways that are difficult to effectively describe. It's like a pair of conjoined twins that share the vital organs - in many ways, it's two very different films that nonetheless manage to work in a beautiful harmony.

Husbands marked my only other adventures with Cassavates before viewing this, but even with only that primer the director's genes pour from every frame of the film. The beating heart of this film is the intimately existential, passionately ambiguous portrait of Cosmo Vittelli (Ben Gazzarra). He's an inspired mess of a protagonist: loyal, sleazy and proud (to a fault). Cassavetes and Gazzarra - and, really, such a character could not exist with anything less than a full-on creative partnership such as that - are not the kind of writers to explicitly spell out Cosmo's motivations and psychology. Instead, the audience is trusted to pick up on hints planted in sometimes obtuse, sometimes wordless scenes. Some examples. Cosmo's concurrent intrigue and boredom towards a sad early morning striptease. The look of confusion and remorse as he spies on the soon-to-expire eponymous bookie enjoying a carefree evening swim. A meandering yet loaded conversation with a semi-girlfriend's mother. The rambling but generous speech Cosmo gives to a rowdy, distracted crowd as he stealthily bleeds out. Cosmo might not be the sort to directly articulate his mid-life crises and emotions, but through Cassavates militantly observational style we still feel like we're granted intimate access to the man: although viewer patience and undivided attention is something of a prerequisite here.

On the other hand, and one that becomes more prevalent in the film's second hour, we have a relatively straightforward thriller. Cosmo becomes embroiled in a situation well beyond his comfort zone, and he's unwillingly promoted to hunter before being quickly demoted to hunted. It's clearly an attempt at lending some commercial viability to a director's muted, non-mainstream style - a gamble which, I should point out, failed pretty miserably at the box office. It could feel disjointed, but it proves a perfectly acceptable match for this story of a lonely strip club owner. It helps that Cassavetes instills the 'action' with an almost farcical realism fitting of his trademark aesthetics. The shooting is messy and the chases are fumbling. It's mumblecore action two decades before anyone ever uttered that cursed word. Ultimately, while providing the film with dramatic weight, the titular killing is what allows this fascinating character to embark on a worthy journey: a journey without hope of everything being wrapped up in a little package. Combined with the stark characterisation, the traditional crime tale is lent a poetic extra layer.

In a nutshell, The Killing of a Chinese Bookie is a film seemingly held together by duct tape: a lengthy series of eccentric scenes, tonal mischief (god, I haven't even mentioned the oddity that is Mr Sophistication!) and carefree genre bending. And, almost in spite of itself, it simply works.
Posted by thecynicalgamer at 9:30 PM