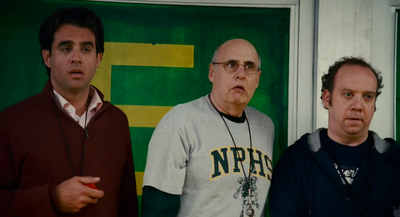 Tom McCarthy has made a name for himself with small scale but emotionally engaging character studies. His first two films aren't world changing, but they're very hard to dislike. He has also had the profound luck of having had fantastic lead actors - Peter Dinklage in The Station Agent and Richard Jenkins in The Visitor. His luck continues in some ways with Win Win - this time he's working with the always reliable Paul Giamatti, a perfect fit for McCarthy's thoughtful indie mindset. And again it's a small scale story coming of age story (this time, it's middle age we're dealing with). Alas, the title's brave proclamation of double success is misleading - this is by a distance the weakest McCarthy film.

Giamatti is Mike: a lawyer struggling to keep his practice open. The office boiler is broken, there are barely any clients and the secretary is complaining about her low salary. Unlike your typical movie suburban depressive, though, Mike is happily married with two kids. In order to support them, he takes advantage of an elderly client with dementia by becoming his legal guardian solely to avail of a $1500 monthly allowance. He quickly shoves the client into a nursing home, but things are complicated by the arrival of the client's sixteen year old grandson Kyle who seems to have run away from home. His arrival is initially met with some hostility from Mike and his family, but Kyle soon turns out to be somewhat of a wrestling protegee. Did I mention Mike is a wrestling coach?

It was near the end of Win Win when it dawned on me that I was just watching The Visitor with a coat of paint. The situations and settings seem radically different, but in terms of dramatic flow and plot developments this is close to identical to McCarthy's vastly superior last feature. It's the same basic story - an aging protagonist finds a source of inspiration in the most unlikely of places, only for a spanner to arrive and throw itself into the works. But whereas The Visitor offered an engaging portrait of contemporary loneliness and alienation (literally), Win Win is the sort of film we've seen handled much better. The likes of American Beauty and Little Children have handled suburban depression with much more aplomb.

There's nothing particularly wrong with the film, but there's very little to surprise or engage with, and overall just doesn't come together. The film jumps back and forth between a sports film and considered character studies, but neither are all that interesting. There are moments of humour and drama (I particularly enjoyed a scene where Mike finally musters his confidence in a rival lawyer's office and starts to show some sort of legal competence), but all in all distressingly by the numbers. There's a wisecracking best friend (Bobby Cannavale) who has little of note to do, other than to - bizarrely - advertise Wii Golf. There's a wrestling team overcoming the odds (the odds in this case being an embarrassing lack of talent). There's bland direction, and there's a script that struggles to make us care for the characters or even create a credible dramatic situation - subplots are either uninteresting or evaporate completely.

It's not the actors' faults. Giamatti gives yet another fine portrayal of quiet desperation, albeit one that lacks originality. Nice to see Amy Ryan back on screen as Mike's wife, but despite a few strong scenes as she comes to terms with the situation her character feels underwritten. Alex Shaffer as Kyle is particularly notable for giving a removed performance that captures teenage angst more effectively than usual. Others, though, are wasted - spare a thought for Arrested Development's Jeffrey Trambor, criminally underused as Mike's colleague

It's all inoffensive stuff, and admittedly the same could be said for McCarthy's previous work. But Win Win left me cold. Like the director's previous films, the plot strands aren't all wrapped up in a nice little packages to the film's credit. However, there's a weak epilogue that, despite providing clear narrative closure, is extremely awkwardly delivered. The Visitor deserved to please the crowd. With Win Win, the crowd deserves better.
Posted by thecynicalgamer at 10:55 PM