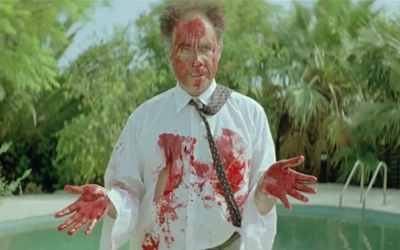 Dogtooth was the first film in a long time to catch me completely off guard. A random pick at a film festival in 2009 alongside better known titles, I had heard very little bar a brief synopsis as I entered the cinema. What followed was an hour and a half of surreal, surprising and shocking black comedy. It had the audience laughing at the same time as being deeply unnerved by the increasingly unstable actions occuring on-screen. Eccentric cinematography, an imaginative script ('A "pussy" is a large light') and a general sense of playful subversion made Dogtooth a rare true original. Plus, it had a fantastic punchline of an ending, which I'm sure plenty of people are still pissed off about.

Time passed, and the shock wore off. I looked fondly back at the film as increasingly derivative Hollywood comedies clogged multiplexes, while the funniest film in quite some time - alongside In The Loop - was relegated to arthouse cinemas for the crime of being subtitled. Reviews flooded in on wide release, praising an economic subtext that I will readily admit I missed the first time around. And while an awful lot of fantastic cinema has come out in the last fourteen or fifteen months, little had the scathing wit and satire of Dogtooth. About time for a revisit!

What remains rewarding about Dogtooth is the surface level lunacy of the film, although with subtexts in mind the film takes on a pleasing other layer. But in any case, Yorgos Lanthimos has crafted one of the most unique films tonally and visually of the last few years. The opening sets the tone - a comical graph serving as an introduction and quickly jumping to a surreal vocabulary lesson as our three captive siblings are misinformed of the meanings of words like 'sea'. It's revealed that the adult (with the mental maturity of children) 'protagonists' are fenced into their house, with their minds twisted by seemingly well-intentioned parents. Their father leaves the house in a car (the only safe way to travel!) each morning for work, occasionally returning with a security guard named Christina who 'services' the son of the family - and, later, the daughters too. It's her influence that ultimately disrupts the carefully forged peace.

The film plays out in almost episodic form, capturing surreal incidences inside the wooden fence, with the episodes forming a rough overall narrative over the course of the film. Bizarre games are overseen by the father, the winning 'child' rewarded with toy airplanes that have 'crashed' in the garden. Harmless outside influences, such as a cat, are met with confusion and hostility, and made even more unusual by their father's bizarre attempts to explain the situation. Family events occur with further 'rewards' (wait for the dance scene). And all this is punctuated with acts of random violence. The 'kids' are confused by the most basic of events, so no surprise they act out at times.

On a basic level: it looks amazing, the performances are engagingly weird and it's consistently funny. The DVD cover compares it to the work of Michael Haneke, and there are certainly elements of his bold social commentary here. Another comparison, though, would be Lars von Trier; well, von Trier with a sense of humour. It has the same confrontational style von Trier is both praised and violently criticised for, but does so with self-awareness and, IMO, precious little pretensions. It serves up a healthy dose of laughs, and the best kind too: the sort you shouldn't be laughing at, but can't help yourself. Who'd have thought a cat and a garden shears could make the stuff of classic black comedy?

So then, once one has appreciated the bounty of delights present on a basic level, one must dive under the surface. What exactly does Dogtooth satirise? First time around, bits and pieces made me think this was a scathing satire of reality television, although that's almost too easy a reading. Others have suggested everything from xenophobia to democracy to the education system are issues ripped apart by Lanthimos. And of course we have Dogtooth as an economic allegory. As an Irish person, I couldn't help but parallel it with Greece's (and Ireland's, and Portugal's, and Spain's) recessionary woes - an argument against economic isolation, suggesting that despite the best intentions outside help is to be encouraged, not violently rejected. Cutting yourself of will only lead to self-mutilation. It's a confrontational message, and while I don't fully agree, it's argued with conviction.

Of course I could be totally wrong. And therein lies the joys of Dogtooth. On one level it's a deliriously surreal black comedy, on another it could be anything you want to read into it. What was the intent of the director? Hard to say. But it's a film that has a message Lanthimos is proudly unafraid to keep ambiguous - he doesn't hold a big 'pussy' up to the themes like lesser directors would. There's belly laughs a-plenty on a first viewing, but it's the subtexts and potential analyses of said subtexts that will make Dogtooth a joy to revisit again some time in the future.
Posted by thecynicalgamer at 12:26 AM