Review: The Tree of Life 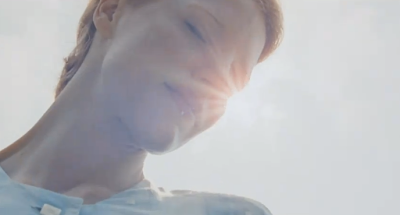 It's mere minutes into The Tree of Life when Jessica Chastain - as the nameless Mother character - sums up the thematic concerns of the Tree of Life in voiceover form. Running with a biblical vibe that runs throughout - indeed, the opening text is from the Book of Job - the character vocalises the conflict between 'Nature' and 'Grace'. Nature, we're told, refers to the people who go through life selfishly and cynically, while the ones who follow the path of Grace are the optimists and the ones who choose to see the beauty in everything. This is all over images of a family coming to terms with the news that one of the three brothers has been killed at the age of nineteen. The Mother grieves. The Father (Brad Pitt) tries to return to normality. Another of the sons (Sean Penn) drifts through a beautifully captured (ah, the joys of architecture!) modern city, seeking solace in his work. In many ways, the opening fifteen minutes is a condensed version of the major preoccupations that director Terence Malik explores over the following two hours.

The set-up is followed by a cinematic imagining of, well, everything really. Like a more literal interpretation of the final act of 2001: A Space Odyssey, Malik - along with his cinematographer Emmanuel Lubezki and an astoundingly successful effects team - visualises the beginnings of the Universe. There's the Big Bang, the beginnings of life on Earth, the reign of dinosaurs and their subsequent decline. Yup, dinosaurs - the CGI may be a bit iffy, but that's the scope of Malik's vision. Has evolution ever been granted such a vivid, beautiful cinematic interpretation? Following this transcendent tour de force, we return to the O'Brien family, this time in 1950s Waco, Texas. The children are born and grow up, and Malik exploring the family's trial and tribulations through a nostalgic filter - everything from the affectionate to the tragic.

The film is largely seen through the eyes of eldest son 'Jack'. His birth - symbolised pleasantly through the image of a child escaping from a sinking house - and early childhood are lent breathtaking life. Shot in a manner that suggests what an Ozu film would look like if his camera suddenly sprouted legs, the low angles and handheld style show us a film in love with the cinematic form. Camera movement is the real joy of this film - the cinematography is endearingly energetic throughout. The camera is the star, capturing the characters in vivid closeups. The vibrant, sharp editing is a vital ingredient, while the soundtrack - drawing heavy on religious hymns and classical music - simply adds to the sensory stimulation. This is a film that makes you fall in love with the cinematic form again.

To explore what the camera actually captures, we must inevitably return to Grace and Nature. Here, they're largely symbolised by Chastain and Pitt respectively. It's also where Malik's endearingly focused and 'simple' storytelling veers, at times, towards the simplistic. Chastain is effectively idolised by the camera and her children. She's timid, and occasionally unable / unwilling to defend herself in arguments with her husband, but for the most part she's represented as a Goddess. Malik clearly has a deep affection for his mother, and he visualises it as if Chastain has rays of sunshine beaming out of every orifice. If you've seen Darren Aronofsky's hyper-affectionate framing of Rachel Weisz in The Fountain (a film that also invites visual and thematic comparisons) you'll have an idea what you're dealing with here.

Pitt, meanwhile, is the patriarch figure you'll recognise from many a work of art - stern yet well intentioned, and struggling to see the good in a life hasn't played out he planned / hoped it would. They're archetypes, and this is a strength at times and a weakness at others. Since much of the film seems to be filmed through the eyes of a child, it's only natural that the parents should be represented with the broad strokes and defining characteristics that a child would pick up on. But the lack of depth to characters does somewhat stand out as the film enters its final half-hour (there's nothing as traditional as 'acts' here, the narrative structure loose but inventive). There are a lot of scenes capturing Chastain's more optimistic outlook on life and her more peaceful relationship with her children, while we're also constantly reminded of Pitt's authoritarian streak and growing frustration with the straws he drew. Grace and Nature, indeed. It, at the risk of underselling the otherwise endearingly broad delivery, borders at its worst on the repetitive.

One could argue that Jack (superbly portrayed by the young Hunter McCracken) - perhaps Malik's projection of himself - is what passes for a protagonist in a film that is hard to define in traditional terms. Large chunks of the film focus on him as he speeds towards adolescence. He begins to notice girls. One segment, again suggesting borderline Oedipus complex, documents an embarrassing and confused discovery of his mother's negligee. His playful streak begins to lean towards the destructive - nothing insidious, simply childhood curiosity. He forms friendships with his brothers. It's a wonderful portrait of simply being a child. And it's only at the end, when we briefly return to Penn's grown-up Jack, that it all becomes clear how the structure and content fit together.

This is a film about life and death, man's relationship with the natural and how ultimately despite our limited understanding we're all part of a much wider Universe. If it sounds pessimistic, it's not at all. This is a film about the glory of life and the beauty of the world. It encourages us to embrace our memories and relationships, and not simply to aimlessly drift through our short existence.

Posted by thecynicalgamer at 3:04 PM