A Few of My Favourite Scenes 3 - End of Evangelion 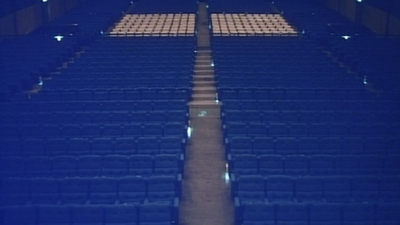 Before we begin, it's important to understand the phenomenon of Neon Genesis Evangelion, the television show that precedes this feature film. To say it was popular in Japan is an understatement. From first airing back in 1995-96, the show has been a perennial obsession for Japanese otaku. The female characters have become 'fan service' icons, and even today Japanese businesses - from convenience stores to arcades - are chock full of Evangelion merchandise (biscuits, figurines, lunchboxes, video games, and much more).

But fans were furious with the way the series ended. For various reasons - budget problems and financial mismanagement included - animation studio Gaimax and Evangelion auteur Hideki Anno had to cut corners as they rushed the last few episodes to broadcast. The results were two final episodes that almost entirely took place in the mind of series protagonist Shinji. Not helping matters was Death & Rebirth: a theatrical film released a year after the obtuse, ambiguous conclusion to Neon Genesis. Consisting of a rushed hour long 'recap' and the first half of a 'real life' alternative ending, Gaimax once again ran out of cash. The otaku revolted, even going as far as spray painting hate messages on Gaimax offices (messages that would subliminally be inserted into End of Evangelion). The grim, shocking 'Rebirth' (opening with Shinji masturbating over the unconscious Asuka, and a vast majority of main characters being cruelly dispatched throughout the 'episode') was not the hyperactive, fan service laden finale fans lusted after.

But, pray tell, are fans really worth listening to all the time? It's a question addressed in a rather brilliant live action interlude in End of Evangelion, the film that continues with the ending established in Rebirth. Indeed, the first forty five minutes (or one 'episode') of EoE is Rebirth itself.

I'm not going to be able to sum up the admittedly rather convoluted central narrative of the series and film here. Just some a quick establishing synopsis. Basically, a mysterious group called SEELE have initiated something known as the Human Instrumentality Project, which assumes humanity has reached the peak of its evolutionary potential and in order to further advance it needs to return to the primordial soup they came from. The alternative is extinction. Heavy, right? And it's nowhere near that simple. But anyway: series protagonist Shinji, deep in a debilitating depression that reflects Anno's own depression, is the one who gets to decide what to do with humanity. Piloting his EVA (the semi-organic mech suits that lend the series its name) he transcends humanity and becomes a divine being. Humanity is quite literally in his hands, all humans having turned to orange goop and their souls released into the atmosphere. 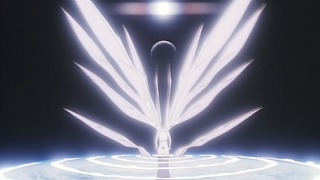 Anyway, a lot of this takes place in what could easily be the most beautifully, hypnotically filmed action sequence ever illustrated. But after a while, we dive into Shinji's head to see how he's negotiating the final decision he has to make. And, suddenly, there's a live action sequence. Accompanied by Bach's Jesu, Joy of Man's Desiring we see shots of Tokyo, crowds and - most importantly - an audience sitting in a cinema screen (a screen that's later empty). Over this, Shinji and the now equally divine Rei negotiate concepts of dreams and reality.

What does it all mean? Like much of End of Evangelion - talk to any fan and you'll surely get a very different reading of the film - it's up for debate. But this is my take on it. Obviously, it fits tightly within the wider themes of the film and series as a whole, as Shinji struggles to understand his place in the world. But this sequence goes further. It seems to me a very considered attempt to comment on the nature of fandom and the way an audience consumes someone's creation.

Over two interlapping shots of an audience, a subtitle pops up on the screen: "Does it feel good?". Boldly, Anno breaks the fourth wall and wonders if the ending the audience are being presented with lives up to their expectations. Maybe not. In one of my favourite quotes about the film, Carlos Ross says: "The second half of the movie is so incoherent and obtuse that it completely loses the mainstream audience (and in fact, virtually any audience) this series has attracted before. It goes beyond art film and beyond anime. And in doing so, it goes beyond the audience's capability to understand and be entertained, which defeats the purpose of something labeled as entertainment." I completely disagree, but it's a fascinating quote. The film simply has to be obtuse to make the points it wants to make (I also think its so profoundly beautiful that it transcends mere quote entertainment unquote and becomes something far more engaging, but that's an aside). If it leaves some audience members behind, that's no fault of Anno's. "That's a substitute for reality", suggests Rei at one point. Perhaps a none-too-subtle dig at fans who become unreasonably entangled in what is ultimately something that isn't worth obsessing over? "Using fantasy to escape reality", perhaps. Evangelion is, ultimately, just a television / feature film series. Is it worth getting so wound up about that you're sending death threats to the creator? Anno doesn't completely rip apart his audience (he's too smart for that - ideas are merely suggested), but its clear his impressions of hardcore Eva fans aren't entirely favourable. Like Shinji masturbating over Asuka earlier in the film ("I'm so fucked up", he admits) they have distorted his intentions and made the whole thing somewhat obscene.


But, more than posing questions of how the audience has consumed his opus, the scene shows Anno questioning his own approach. Maybe the fans are right, and he should have created a more traditional, accessible ending? Rei imparts yet more wisdom to Shinji: "You can't bridge the gap between your truth and the reality of others". And to me, that's Anno clearly stating his final opinion on the matter. So what if some fans didn't like it? Evangelion is the work of Anno - a deeply personal one that often probes hix own psychological problems in depth. This is his decision: like Shinji ultimately rejecting Instrumentality and finding faith in humanity again, Anno's going with his heart, and deciding that this is how he wants to finish the story. Demanding, illogical fans be damned!

"I don't know where to find happiness" wonders Shinji aloud. Rei replies "So you only find happiness in your dreams". And that's what sums much of Evangelion up - themes of belonging, friendship and society explored in great depth. The sequence concludes with shots of a disgruntled looking audience, an empty theatre and then, finally, shots of hate mail Gaimax received following the series ending and Death & Rebirth (Die Anno!, the subtitles nicely inform us). In one three minute scene, Gaimax and Anno have powerfully reflected on how their art is consumed by a rabid fanbase. The result is an ambiguous scene that likely pissed off many of the fans it critiques. But, maybe, those fans don't really understand what Evangelion is in the first place.

End of Evangelion is one of animation's most complex, underrated and greatest achievements. And, in a short foray into live action, it shows itself as comfortable in real-life as it is in animation.


Posted by thecynicalgamer at 12:33 AM