Sex, Drugs and the End of the World 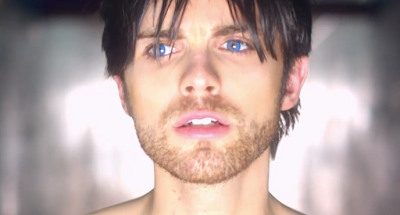 Back in the early 90s, director Gregg Arkai released a number of (what are considered by many to be) definitive Generation X movies - films like Nowhere, Totally Fucked Up and the Doom Generation. Most of them featured an actor named James Duval. I haven't seen them, but Richard Kelly did. They had a big influence on him: their attitude and tone influencing his one and only 'success' (and possible fluke, going by the vastly inferior director's cut) Donnie Darko. He acknowledged his debt to Arkai by casting Duval in one of the film's most pivotal roles as Frank: the iconic, nightmarish bunny rabbit. Now, after a more cerebral excursion with the superb Mysterious Skin and a diversion to stoner comedy with Smiley Face, Arkai returns to his Gen X roots with Kaboom. This time, however, he has added supernatural elements. Duval is back too, as a character named Messiah who shows up with a crown of thorns at one point. Unfortunately, like many reviewers, I couldn't get Donnie Darko out of my head, because here the imitated becomes the inferior imitator.

The more I think about it, the more pronounced the similarities to Kelly's opus are. The film stars Thomas Dekker (am I the only one who's a bit freaked out by his resemblance to Casey Affleck? Just me?) as Smith, a sexually 'undeclared' teenager experiencing recurring and possibly precognitive nightmares. There's freaky, possibly hallucinated, guys wearing animal masks. There's a mysterious book that helps describe the ever weirder happenings. There are vague references to the end of the world. There are irreverent pop-cultural discussions. There's also a witch. Okay, Donnie Darko didn't have a witch.

In fairness, it takes a while for Kaboom to truly drift towards the supernatural. The strangeness is there from the beginning, but they just seem like playful quirks in what is otherwise a light-hearted sex romp. Smith lusts after his surfer roommate Thor (Chris Zylka) while engaging in casual sex with the eccentric, hyperactive London (Juno Temple) and infrequent rendezvous with strangers on nudist beaches. Meanwhile, his lesbian best friend Stella (Haley Bennett) is in a messy relationship with the potentially psychopathic witch Lorelei (Roxanne Mesquida). Plus, there's a girl who was possibly murdered by costumed cultists, but Arkai will get back to you on that.

The sex is handled playfully, with plenty of flesh, albeit in a shall we say 'tame' manner. It's not Shortbus, that's for sure - it's rated 15s and over here in Ireland, so there's a lot of above waist nudity. But these are absurdly attractive people (particularly the gorgeous Bennett and Temple) having inconsequential intercourse with other absurdly attractive people. Sure, barely any of them can act - although Dekker makes a likable protagonist - but it's throwaway, confidently camp fun for a while. Less successful are Arkai's attempts to emulate his slangy vernacular from his early work. I don't know about you, but I grimaced hard when Bennet utters the sentence 'What the shit is going on?'. Like much of the dialogue here, it feels wooden and hardly rolls off the tongues of the actors. Real people do not speak like this, and fictional people shouldn't either. Similarly, the references to 'hip' culture wear thin. While the soundtrack is hit-and-miss with its wide selection of critically acclaimed hipster music, the more vocal references and name-checking of pop culture is entirely miss. "I got your email from the Explosions in the Sky facebook page". Indeed.

The early flaws are easy to ignore as you go along with the campy fun and Arkai's casual yet endearing direction - it's a film full of colour, and the low budget cinematography is often disguised by quick bursts of invention. The flaws, unfortunately, only become more pronounced in the third act shift towards straight science fiction. It simply doesn't work. Any curiosities the early mysteries evoked are rendered obsolete as Arkai explains every single one of them away in increasingly forced, blunt and uninteresting ways. Coincidences here are merely lazy contrivances, and even attempts to shock - there's a brief, unnecessary allusion to a possibly incestuous twist - feel half-assed. There's lots of stuff about cults, messiahs and other supernatural shenanigans, but it's about as subtle as a brick to the face, and about as enjoyable. A ludicrous, exposition-heavy final ten minutes sees the film at its very worst, and seriously threatens to undo all the good that came before.

In Arkai's defense, he doesn't take things too seriously, and tongue is in cheek throughout. It's almost like a bubbly, sex-filled cartoon. But Kaboom is two disparate genres - sex comedy and supernatural thriller - unsatisfactorily combined, especially since one is more effective than the other. The result is a disappointingly scattershot film that isn't as clever as it wants to be. In Donnie Darko, the supernatural story was beautifully integrated with the teenage angst. Here, it's shoddily superglued on.
Posted by thecynicalgamer at 2:24 PM