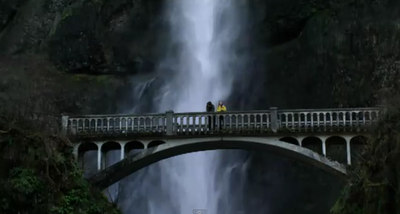 If there was any justice in the world, Aaron Katz would be better known. On the surface, he's just another purveyor of finest mumblecore. Yet his films have far more character and charm than most directors these days. His first two films - Dance Party USA and the sublime Quiet City - are two honest, realistic romances in a sea of shitty rom-coms and 'chick flicks' (the latter being a term I always find deeply condescending to the fairer sex). Sure, the actors may be non-professional, and the budgets low, but Katz has passion to spare and a keen eye for the everyday. For his third film, Cold Weather, he takes a surprising turn towards genre while never forgetting his mumblecore roots. The results are unique and rewarding.

The carefree first half of Cold Weather will be familiar to anyone familiar with Katz' previous work. Doug (Cris Lankenau) is a guy drifting towards his thirties in no particular rush to go anywhere at all despite his schooling in forensics. He has moved in with his sister Gail (Trieste Kelly Dunn), and decides to get a menial job in the local 'ice factory' to pass the time. There he befriends Carlos (Raul Castillo). One day, his ex-girlfriend Rachel (Robyn Rikoon) comes to town on business. Doug invites her over for poker with Gail and Carlos, and soon the quartet are hanging around with each other regularly. One night, Raul gets worried when Rachel doesn't show up for a 'date' they'd arranged. Doug is at first cynical, but is soon persuaded to check out Rachel's motel room. They find an empty room, a suspicious flier, a coded note and some discarded Chinese takeaway. And thus begins an unlikely detective thriller.

For me, Cold Weather is a film that simply worked. It may have caught me in a good mood, and I'll happily admit a bias towards Katz and his low budget contemporaries, but I still loved this film. The first half is fairly typical mumblecore material, and the criticism 'nothing happens' will surely be levelled at it by many. But it's the thriller aspects that add real bite to this movie. Now, don't go in expecting an action packed detective drama - this is a satire if anything. Basically, what Katz has made is a film that imagines what would happen if a bunch of 'normal folk' stumbled across a mystery. They embark on awkward stakeouts, library assisted code breaking and profoundly unexciting stakeouts. Sounds boring, but it's actually very funny. There's a bit with a pipe where Doug tries to emulate his hero Sherlock Holmes that is genuinely hilarious, and the banter between the enthusiastic investigators is always enjoyably amateur. Like Baghead married mumblecore principles with horror tropes, this is an enjoyably naturalistic and playful take on the detective film.

Some will certainly accuse the film of that most frustrating of criticisms: 'nothing happens'. Indeed, many may find the shift from subdued slacker comedy to detective story a bit jarring. But the way Katz ultimately joins the two disparate elements is ingenious. It may sound like a strange comparison, but the ending here reminded me of No Country for Old Men - a sudden ending that may annoy many, but when you think about it it makes perfect sense. Because while Cold Weather often resembles a conspiracy thriller, at the heart of it is a simple, beautifully understated brother and sister bonding story. It only dawns on you when the film is over how likable the characters were, and what Katz was trying to achieve. At it's core this isn't a detective story: it's a down-to-earth relationship drama.

The cinematography is more extravagant than Dance Party USA or Quiet City. DoP Andrew Reed does a wonderful job in capturing a grim, colourless Portland. Indeed, the location is a character in itself: the wintery Oregon conditions lending the film its title. Performance wise, there's the odd moment of mumbling and a distinct lack of experience, but it actually adds to the atmosphere. Again, these people feel like individuals you could meet in any bar. Doug seems a bit moany at first, but as he becomes engrossed in the unfolding narrative you get sucked in with him. Dunn is particularly notable for giving a performance that really captures a sense of quiet, subdued boredom. A jaunty score from Keegan DeWitt works surprisingly well, and is used sparingly.

Cold Weather won't appeal to everyone, and at the end of the day it's relatively lightweight. But it is also completely devoid of pretension, and succeeds in crafting a refreshing mesh of two very different genres. I'm not sure why, but I haven't enjoyed a film so immensely in a long time. Easily the best American indie film I've seen in recent times. It's funny, different and has charm to spare. A real gem.
Posted by thecynicalgamer at 10:17 PM