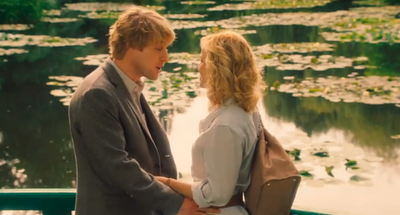 Midnight in Paris is a very good film. I'd suggest it may even be a great one. This took a while to sink in. Because while I'm a long-time fan of 'vintage' Woody Allen, every recent film I've seen of his has resulted in a feeling of profound distress and disappointed. Even the odd occasion when he might put out an 'alright' film - Vicky Christina Barcelona, for example - there's something missing, and the occasional mumblings that he's 'returned to form' come across as insincere and hyperbolic. The Allen magic that defined his masterworks is typically absent from all but a few of his post-1990 films. His early, funny stuff. His genre dominating and defining romantic comedies. His love letters to Manhattan. His passion for cinema. For the first time in a decade (or, heck, even longer), Midnight in Paris is a magical Woody Allen film.

Perhaps expectations had something to do with it. Having managed to accidentally avoid publicity materials (I did see the trailer and gorgeous poster, but they admirably give little of note away), I was expecting yet another rigid, formulaic rom-com from cinema's most prolific veteran. After his unconvincing sojourns to London (resulting in the abysmal Casandra's Dream, potentially Allen's all-time low), a change of location didn't fill me with great confidence either; especially when the setting was such a frequently filmed city. But Midnight in Paris is destined to be a definitive cinematic essay on the city: a film that probes what it is that attracts countless artists, filmmakers and travellers to the City of Love & Lights. Move over Paris, Je T'Aime - this is a vastly superior reflection on the city and its history.

Having been particularly seduced by the surprises of Midnight in Paris, it would be inappropriate of me to go into more detail. If you haven't seen the film, then, now would be a good time to close this particular tab, so I don't inadvertently ruin some of that joy for you. I assure you, it's a wonderful film, go watch it! Still here? Good: then I'm going to assume you know what the deal is here. I was genuinely excited when the film first jumped back in time - it was unexpected, and quickly established itself as a very effective trick indeed. It's the perfect tool to examine the character of Gil (Owen Wilson). Like so many artists throughout time, he's infatuated by the city of Paris: more specifically, the 'Golden Age' of the 1920s. By literally granting him his wish to be partake in the past (no wishy-washy explanatory magic here, simply simple movie magic) Allen crafts a playful way to examine themes of romanticism and nostalgia clashing with reality. The journey Gil embarks on is a fascinating one, and it will surely resonate with anyone who has ever dreamt an impossible dream.

This isn't new territory for Allen - in my favourite film out of his massive filmography, The Purple Rose of Cairo, he memorably pulled a movie star from the cinema screen and into small town, depression-era America. A character being transported to early 20th century Paris is a riff on the same basic idea. But a great riff it is. Literally having our protagonist interact with the great figures of the time - from Dali to Fitzgerald - makes for a wonderfully entertaining film. Allen has got damn good actors on board to portray these charismatic figures. Adrian Brody is notable for discovering a small fortune in comic gold during his brief cameo as DAAALLLLLIIIII. Alison Pill is one of her generation's most promising actresses, and she doesn't disappoint here as the energetic, slightly loopers Zelda Fitzgerald. They, and others, are always there to provide laughs and unexpected takes on well-known artists. And, of course, Mario Cotillard is simply radiant, especially in affectionate, suitably old-fashioned soft-focus.


The only minor problem I had was with Rachel McAdams. Not her performance, as such: she's actually does wonders with what she has. What she has, as you might infer, is the problem. If there's one overall problem I have with contemporary Woody Allen films, it's that his dialogue has grown increasingly wooden and artificial. His scripts have always artificial, but he always managed to pull it off in his golden days. In recent years, there has been a few too many occurances of obsequious banter. When McAdams speaks here, she just doesn't sound like a real human being. And while Allen parodies the 'pseudo-intellectuals' that populate his films with Michael Sheen here, McAdams' character simply feels underwritten. It doesn't matter all that much, since we're meant to detest Inez, but it was the one part of the film where I feared Allen would overindulge in his bad habits.

The fears were unfounded. It's obvious from the first moments of the film that this is something different. I'm no Allen scholar, but having seen a significant amount of his films over the years, it's telling that the film opens with an out-of-character pre-credits sequence: a montage of the city. While it certainly drags on a bit (although we're pleasantly reminded of Manhattan), it's an indicator that the director has somewhat left his recent comfort zone. What follows is a thematically rich, vibrant, funny, romantic and affectionate film. It's cleverly directed, and wonderfully acted. Midnight in Paris is simply a delight.

Posted by thecynicalgamer at 1:43 AM