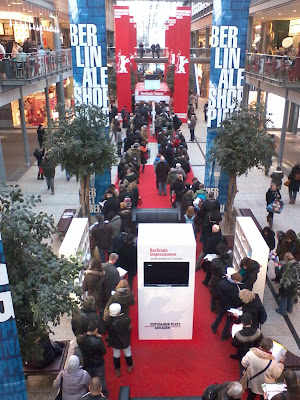 I took one picture in frosty Berlin last weekend. It was of a queue. Now don't get me wrong, Berlin is a fascinating city with countless photogenic and historically important spots (although one could argue Wim Wenders basically painted the definitive portrait of the city in the superb Wings of Desire). It also, like any city, is beautiful in the snow. This was my second time visiting, though, so I wasn't here to sightsee. It was, however, the queue in the Arkaden shopping centre that truly amazed me enough to pull out my phone and grab a quick snap. You see, here were hundreds of people queuing for tickets to the cinema. It was like Disneyland, but in a shopping centre, with a box office instead of a rollercoaster at the end. There was an image mirror of that on the other side as well, by the way.

The queue stands testament to two things. One: Berlin is whipped into a film frenzy for a week and a half when Berlinale comes to town. There's celebrity spotters outside all the major hotels. Potzdamer Platz becomes a freezing hub of all things cinematic. A-list stars could lurk around any corner (Angelina Jolie was the one I managed to get a quick glimpse of). However, the second point is this: Berlinale is not necessarily a film festival where you come to watch films.

I did manage to see two films, and probably could have seen one or two more had I the time or inclination to join the enthusiasts camping overnight in the shopping centre in the vague hopes of grabbing a ticket to something, anything. Indeed, I tried desperately to get a few tickets online prior to my departure - but the servers were too busy at 9 AM, and sold out by the time I could finally load a page at 10. I did eventually score one ticket online, and one through contacts and acquaintances over there. If you're going to Berlin to gorge on as many movies as humanly possible, be prepared to contend with the German and foreign masses who are there with the exact same idea. And, naturally, be prepared to wait. In the cold. Did I mention that it's pretty cold over there?

The two films I saw, to take you on a brief critical tangent, were Dollhouse and Aujourd'hui (Tey(Today)). The former is the third feature from Irish director Kirsten Sheridan, and is a semi improvved affair concerning a group of teenagers who break into a home in a wealthy South Dublin suburb and have a night of frivolous and self-destructive 'fun'. It's solid enough, with some moments of insight and engaging drama, but its biggest strength is also its biggest weakness as the film ultimately finds it difficult to find a consistent structure or pace. Aujourd'hui is kind of like an arthouse Senegalese version of that episode of the Simpsons were Homer ate the blowfish sushi and thought he was going to die. Here, Saul Williams plays a healthy and seemingly beloved man who is destined to die at the end of the day for fantastical reasons the film - to its credit - never discloses. It's a sombre and reflective film with some very powerful moments, albeit one that is admittedly a difficult watch at half nine in the morning following three or four hours of sleep.


(A brief note of disappointment: I didn't get to see Guy Maddin's Keyhole, as it was showing the day after I left. That I would have queued for.)


Yet Berlinale was still a delightful experience, even if the harsh mistress that is time meant I couldn't get around to half as many films as I would have liked. I was primarily there on an educational and networking (shudder) trip, and on those levels it was a fascinating trip. The European Film Market was an eye-opening afternoon - wandering between studio stalls seeing what was being bought and sold. It's not for the public (educational pass ftw!) and there's an atmosphere of 'serious business' throughout the halls the market occupies. If you have wares you want exhibited in Europe, this is the place to be. It's also the first place I've ever heard the surely contradictory phrase 'exploitation art' uttered. And collecting flyers for the shittest of the shit upcoming (and, in some deserved cases, never coming) movies proves a novel distraction.


Elsewhere, I got to attend two or three of the many, many afterparties and 'meet, greet, drink' sessions that take place all over the city. They're a great opportunity to get talking to some fascinating people and, if it's the weekend, tend to prove the perfect opportunity to take advantage of Berlin's 24-hour public transport (a luxury more cities should enjoy). We also attended a number of informal panel and discussion events. A talk about crowdfunding - with the producer of Iron Sky and the director & producer of American indie film Electric Children partaking - proved interesting if somewhat lacking in insight. Entirely insightful, on the other hand, was the Raindance Berlin Live Ammunition pitching event. Ever had an idea for a film? Rest assured your idea is considerably better than the increasingly bizarre ones presented on stage last Saturday in Berlin.


What is so special about Berlinale is that there's something for everyone. For the casual film fan, there's the chance to spot some of your favourite actors and directors on the red carpet. For the enthusiast, there's an opportunity to see world and arthouse cinema being gorged on by huge numbers of like-minded film-fans. For the professional / filmmaker, there's countless commercial and artistic opportunities. If you happen to fall into all of the above categories, then you're in for something truly special. The 62nd International Berlin Film Festival was an experience quite unlike anything I've ever seen: a city transformed into a candyland of cinema. I'll be back, Berlin. I'll be back.
Posted by thecynicalgamer at 11:34 PM