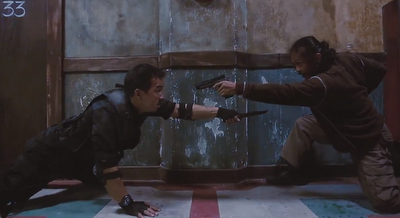 There are some films that demand to be seen in a cinema, with an audience of enthusiastic, like-minded patrons. The Raid is one of those films. This morning's screening at the Dublin International Film Festival was a giddy adrenaline rush. We laughed when we were meant to. We gasped when we were meant to. We didn't cry, because The Raid isn't concerned with 'emotions'. It is concerned with pure, unadulterated action. And it's undoubtedly the best film of its kind in at least a decade.

The setup is simple as can be: a group of armoured police raid a tower block in search of a drug lord who resides on the fifteenth floor. The drug lord's small army of minions don't take kindly to this. Let's not waste anymore time on plot, because The Raid sure as fuck doesn't. There's a handful of double-crosses, and a brief second half arc of brotherly redemption. But the narrative is bare bones, and merely an excuse for bone crunching and blood-letting.

A quick disclaimer: The Raid is not a contemplative reflection on the horror of violence. The body count approaches close to triple figures (stay for the credits, and chuckle at cast descriptions like Hallway Victim #12), but it's all played for thrills and dark humour. This won't be for everyone: it most definitely revels in hyperviolence. But for fans of martial arts, stylised gunplay and bladed combat this film provides treat after treat. Inspired by the films of John Woo, Takeshi Miike and the great martial artists (Ong Bak and Kung Fu Hustle are surely influences) the insane stunts begin barely ten minutes in and don't relent for one hundred brilliantly exhausting minutes.

The punches and kicks cripple. The blades penetrate and rip. The semi-automatic bullets more-or-less explode. This is a brutally stylised film where you feel every single impact. At the centre is Iko Uwais, an Indonesian practiconer of a martial art called Pencak Silat. As one of the few police survivors of the raid gone wrong, it's left to his character to get out alive and, hopefully, get his injured friends out too. Despite little acting experience - this is his second film with director Gareth Evans - he has an astonishing screen presence. He's an extraordinarily physical performer and Evans & co. consistently provide exciting situations and combatants for him to play-off. An extended hallway battle is the centrepiece of the movie, and it's jaw-dropping stuff. As minion after minion piles into the hallway, they're dispatched by Uwais in consistently visceral and inventive ways. I wouldn't dare ruin any of that invention.

But that particular setpiece takes place after a first act of equally exhilarating action. Many films would run out of steam after such a relentless rush. But The Raid just keeps on fighting, and the stunts only increase in number and impressiveness. Back-breaking, knee-smashing, headbutting - it's eye-melting stuff delivered with a blunt force I've personally never seen in action cinema before. Even the climactic battle against a demented fellow by the name of Mad Dog keeps on providing raw thrills (not least of which involves a jaw-dropping use of a light bulb).

It's a brilliant mix of old-fashioned stunt work and clever effects work. Welsh director Gareth Evans has conjured up a perfectly considered blend of physical reality and fantasy action. It looks and sounds great, too, with a pumping soundtrack and consistently atmospheric lighting (it's also a film that makes extremely inventive use out of darkness). The camera basically glides from stunt to stunt - at the risk of hyperbole, the camera movement borders on the poetic for this sort of thing.

What is most astonishing about this film is the budget. Shot over three months for just over one million US dollars, it genuinely looks like it cost one hundred times that. Indonesian film costs are surely lower than elsewhere, but it's still a triumph of low budget filmmaking. The incoming Hollywood remake is sure to have more money, but it'd be a small miracle if it looks anywhere near this good.

If you're going to be dumb, you gotta be tough. The Raid is dumb fun, but it's so unrelentingly tough that it transcends stupidity to become something much more sublime than that. You've seen more insightful movies. You've seen more emotionally involving movies. But it's unlikely you've seen anything as unrelenting and brutally entertaining as The Raid. A truly remarkable piece of extreme entertainment. Watch it with a crowd, and embrace every bone-smashing minute.
Posted by thecynicalgamer at 9:38 PM