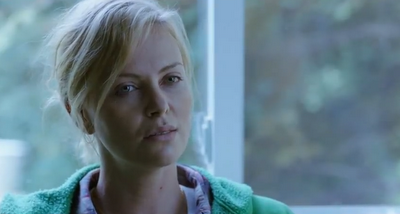 Sometimes people on the internet get angry, and rarely has this been illustrated as vividly as the backlash against poor old Juno. Initially received as the charming, offbeat little film that could, a rake of award nominations / wins and a general sense of hyperbole soon turned many against it. And yes, while the film does certainly overdose on quirk (the much maligned hamburger phone), it is in this writer's opinion largely undeserving of the general negativity that often rears its head when the film is mentioned on discussion forums. However, the detractors are a vocal bunch, and when screenwriter Diablo Cody's next effort - Jennifer's Body - was met with universal hostility, many instantly pounced and giddily demoted Cody from the 'next big thing' to the 'next worst thing'.

So it will surely come as a shock to the 'haters' that Young Adult - Cody's reunion with Juno director Jason Reitman - is actually rather good. It's especially surprising after a misleadingly broad trailer. Indeed, the first ten minutes of the film play almost like a mission statement: Cody determined to show her worth. There's no witty slang, no hip soundtrack and no wisecracking teenage protagonist. Instead, we have Mavis Gary, powerfully realised by Charlize Theron. She's a sort of ghost writer for a series of popular young adult books about a high school. She engages in meaningless sex after unhealthy doses of alcohol. After receiving an email from her college sweetheart Buddy (Patrick Wilson) announcing the arrival of his first-born, she becomes determined to prove her worth and win Buddy back. She travels back to her home town, explaining to her old neighbours and schoolmates that she's attending a 'real estate convention'. In reality, she merely wants to destroy a marriage and reaffirm her own self-worth.

There's no hiding it: Mavis is a deplorable character. It's a gambit designing a film almost entirely around an unlikeable protagonist, but it pays dividends here. Theron portrays such an obnoxious train-crash of a person that it becomes a source of sick joy watching her twisted interactions with others. This leads to a very funny film, most definitely, with strong comic turns from the likes of Patton Oswalt (playing a nerdy and overweight classmate of Mavis who was crippled by a group of jocks when they accused of him being gay). But mostly it's a cynical film, with Theron's character almost entirely incapable of sincerity, altruism or personal advancement.

Mavis is frozen in the 1990s: unwilling to grow up, and still dwelling on pop culture from her adolescence. A clever credit sequences repeats a Teenage Fanclub song three times as Mavis endlessly rewinds a mix tape Buddy once presented her with. As her schemes fail to come to fruition, there is the suggestion that perhaps she will learn to overcome, well, herself. But, alas, Mavis is too far gone for that. In a nice visual summation of the film's thematic focus, she enters the town in a discoloured Hello Kitty t-shirt, and she leaves wearing the same thing. She has learned absolutely nothing. The t-shirt provides a stark contrast to the amusingly over-considered outfits she chooses for her encounters with Buddy. She still attempts to represent herself as the high school prom queen. But instead she's looked upon by others with a mix of pity and disgust. She is a character from one of her books: vapid, bitchy and immature. Her character arc is a circle: inevitably going to end up back where she began, even if she has to delude herself that she's in the right.

It would inaccurate to refer to Young Adult as 'subtle'. But it's a much more considered and understated film than Juno in terms of scripting and direction. Buoyed by a purposefully uncharismatic central performance, Young Adult is hardly a crowdpleaser. It's a bittersweet look at one emotionally-stunted woman, and her consistently misguided attempts at social interaction. It's a film devoid of hope, but we as the audience should hope it is a sign of great things to come from Cody. If Juno was an adolescence, then this is adulthood. Even the detractors would have a hard time finding significant fault with this. Free of hype and exaggeration, Reitman and Cody's work can finally speak for itself, with nary a hamburger phone in sight.
Posted by thecynicalgamer at 9:06 PM