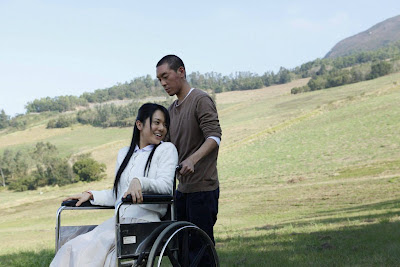 The unusual contradictions at the heart of Revenge: A Love Story are evident even from the title. From Hong Kong director Ching-Po Wong, this is on one-hand a hard boiled and ultraviolent tale of revenge. On the other, it's a love story about two people with an uncertain place in society and their attempts to traverse the rough waters ahead of them. While it's an interesting approach, the film is ultimately unable to convincingly marry the two disparate narratives together.


It begins with the titular acts of vengeance. The pregnant wives of Hong Kong police officers are being murdered along with their unborn children. Caught off guard, the grieving police rush to catch the culprit. They eventually apprehend Kit (Juno Mak). The film then makes a significant time leap backwards, and follows Kit's relationship with schoolgirl Wing (who, we're unconvincingly informed, is mildly mentally ill), played by Sola Aoi. The story tracks this blossoming romance between two social outcasts, but eventually the reasons for Kit's inevitable kill rampage become more and more evident.

Have you spotted the biggest problem with Revenge: A Love Story yet? It's the uncertain morality of the film that makes it a difficult one to fully engage with. On one hand we're asked to sympathise with Kit and Wing. Yet knowing what the future holds for them, it's hard to root for 'em. Kit's actions that open the film are every bit as deplorable and depraved as the ones that led him down the path of vengeance. It's uncertain if the film and characters revel in violence or are repulsed by it. There are sweet scenes scattered throughout the 'love' story, but ultimately it's the sour that pervades every frame. A last act attempt at arthouse ambiguity falls flat as well, emphasising the often unclear tonal identity of the film.

Not that this is a bad film in the traditional sense. Taken as an exaggerated and slightly offbeat genre film, there are things to like. The grey colour palette creates a palatable sense of dread and despair, and quite suits the tone of the story. Despite often falling short of hitting the mark, the film does at least deserve kudos for having a novel approach to the revenge thriller: it's at least moderately interesting seeing the film attempting to explain a character's motivations for becoming a cold-blooded serial killer. There are also a handful of unexpected twists and enjoyable setpieces throughout. Revenge: A Love Story certainly isn't boring.

If recent cinema is anything to go by, East Asia is a place full of extreme acts of vengeance. Yet Wong's film falls short when compared with the stellar revenge films that have been produced by his South Korean and Japanese neighbours (I Saw the Devil and Confessions, most recently). As the credits roll, I was uncertain if Revenge: A Love Story was exploitative or insightful. Ultimately, I think it's a somewhat awkward mix of both.
Posted by thecynicalgamer at 9:14 PM