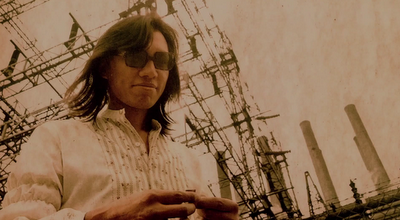 Sixto Rodriguez, as various subjects in this new documentary are keen to point out, is the greatest musician you've never heard of. The mysterious Detroitian recorded two albums in the 1970s, which were beloved by the few people who heard them. But, in the American music industry, cult following counts for little. Sixto (or 'Jesus' as he was often credited as on record sleeves) was dropped from his label, and promptly disappeared. Rumours abounded that he committed ritualistic suicide on stage at the end of a gig. Somehow, a Rodriguez record made its way to South Africa, where it captured the popular imagination of the population. The album Cold Fact ultimately proved to be one of the most successful albums of all time in the country, acting as a soundtrack to South Africa's social revolution and campaigns against apartheid. A few decades later, a music journalist and a long-term Rodriguez fan decided to do some research into the borderline anonymous icon, and turned up some surprising findings...

The documentary Searching For Sugarman was one I was initially a little hostile towards it. It felt as if Swedish director Malik Bendjelloul was showing off stylistically for no instantly discernible reason, with loads of pointless dolly & tracking shots and a bizarrely convoluted title sequence. Such visual quirks actually detract from the actual documentary content. A series of short animated vignettes don't hit the mark either. The film takes the form of a private detective story for much of the opening half, and it's mostly entertaining, but also feels uneven. I've read a few reviews since that seem to suggest they left quite a bit of Rodriquez's backstory out of it, which leaves a sour taste. The non-Rodriquez music feels misjudged dramatically and emotionally, while the hyperbolic Rodriquez worship of the film's interviewees gets a little repetitive. The music isn't that good, chaps.

*the following paragraph contains potential spoilers, if reality can be considered something spoilable*


However, I'm happy to confess that these early misgivings eventually evaporated as the film progressed into its captivating second half. Here, this documentary really got to me. There's a lot of joy and genuine triumphs, and it certainly brings you on an emotionally affecting journey of an extremely likeable man and his cultural legacy. Rodriquez himself is a charming, modest and selfless individual (and endearingly awkward around a camera) and his eventual journey to South Africa is just a great happy ending for any number of people. The film evolves into a triumphant celebration of this genuine and admirable individual: one of those people whose eventual success (artistically, if not financially, in one the film's critical undercurrents) is well deserved. The scenes where Sixto finally steps onto a stage in South Africa to a rapturous response from his legions of fans is spinetingling stuff. Even when Rodriquez was relegated to obscurity for decades, he never stopped working in tough manual labour to support his family. Eventually, any audience member will be convinced that earlier hyperbole might not have been completely unwarranted.

There's some sly digs at record companies and the commercialisation of art, but at its heart this is a deeply human story. It may gloss over some potentially intriguing material, feature some over-elaborate cinematography and take a while to get to its pounding emotional core. But when it finally hits the mark, Searching for Sugerman is a very involving crowdpleaser where the warmth and passion of the subject matter allows us to forgive some cheeky directorial missteps.
Posted by thecynicalgamer at 2:19 PM