Bullet to the Head

And Now For Something Completely Different 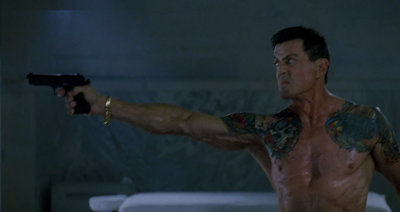 Do you like 1980s action thrillers? If so, Bullet to the Head will savagely take advantage of your nostalgia and wallet, leaving you battered, broken and crying tears of blood, left with nothing but memories of better, more innocent times.

Imagine the laziest, dumbest, sleaziest direct-to-video buddy cop thriller you ever accidentally rented on VHS because you thought it was that other, better film. Did you imagine it starring a grumbling, plasticine molded ninety year-old hitman (played by Sylvester Stallone, looking increasingly like he's going to explode in a horrible rain of throbbing veins and square chins) making racially intolerant wisecracks at his reluctant detective partner (Sung Kang)? Good, you've just saved yourself a cinema ticket, although why this monstrosity is stinking up theatres instead of rotting in a decrepit, forgotten bargain bin in your local electrical goods outlet is anybody's guess.


That it tells a straightforward story in an utterly incoherent way is a given - it would almost be disappointing if it didn't. Lots of people get shot in the head in imaginative, unfamiliar settings such as a Turkish bathhouse and characterless construction sites. You begin to think the slayed may have gotten the best deal as a nap begins to seem like an increasingly enticing prospect.

From the director of The Warriors, but don't be taken in by his theoretically prestigious filmography. It's a trap.