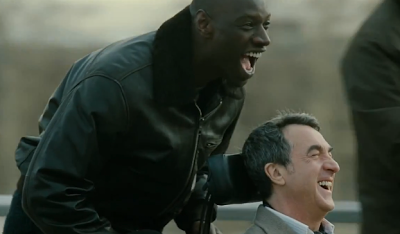 Oh, how I was looking forward to this one! Intouchables (or The Intouchables, or Untouchable - the film goes by various names in different territories) is the French sensation that has become the second highest grossing foreign language film of all time (just behind, somewhat depressingly, The Passion of the Christ). Critics were divided, and some weren't very welcoming at all: sober trade mag Variety particularly went to fucking town on the thing (sample quote: "Though never known for their subtlety, French co-helmers/scripters Eric Toledano and Olivier Nakache have never delivered a film as offensive as "Untouchable," which flings about the kind of Uncle Tom racism one hopes has permanently exited American screens"). When a film attracts such wild positivity from audience and such a divisive reaction from critics, it's always delightful to discover what side you fall on.

I'm going to (mostly) side with the cold-hearted cynics on this one, because in various ways Intouchables is rotten to the core. The film is based on the true story of wealthy quadriplegic Philippe Pozzo di Borgo (played here by François Cluzet) and his caregiver Abdel Sellou (here predominantly referred to as Driss, and played by Omar Sy). The two hit it off and both learn much about life and high / pop culture from each other. Before I kick off with the vitriol, a deserved acknowledgement for the film's two most valuable assets: Sy and Cluzet are excellent. They have a strong chemistry and commitment to their characters. Said characters are written as stereotypes, but Sy's go-for-broke enthusiasm & natural charisma nicely plays off Cluzet's understated, subtle delivery. Even when the script and direction do them profound disservices, the two are rarely less than charming and likeable. They're the performances that could elevate a decent film to near greatness, and in this case make a bad film bearable.


Such a shame the two talented leads are wasted in a film that gives the adjective 'crowdpleasing' a bad name again. There's nothing theoretically wrong with crafting a breezy, triumphant comedy about tricky themes and subject matter. But this doesn't land that particularly dangerous trick. Yes, there's the occasional chuckle or smile to be had - such as a series of brief scenes where Driss tries to woo one of Philippe's female employees (Audrey Fleurot), or a late-film shaving sequence - but most of the film's cheap 'culture clash' scenes would have seemed a tad trite in the 1980s. Its 'foreign language' credentials shouldn't cause us to forgive its appalling manipulative tactics straight out of the Hollywood rulebook - a cheesy soundtrack doing the majority of the heavy emotional lifting is par for the course. It refuses to engage with the more complicated, unromantic side of the story. Early on, Philippe wagers that Driss won't last a month going by the evidence of previous employees. The film fails to illuminate any of the supposed trials or tribulations - the film is simply too eager to please. The Sessions more recently showed how a cinematic retelling of a 'true story' of this ilk could be handled in a mature, honest and still utterly heartwarming way. That film wasn't a masterpiece or anything, but seems positively subversive and paradigm-shifting compared to Intouchable's allergy to anything even remotely provocative. In a rare break from tradition, it's not completely out of the question that the inevitably forthcoming Hollywood remake could prove to be a bolder, braver proposition altogether.

For a film held back by its 'kid gloves' storytelling, it's slightly ironic that one of the film's most questionable aspects has to be discussed with such great delicacy. That's the combustible topic of race and class. Is the film 'racist'? Certainly not intentionally. But it does utilise some regrettable shorthands and clichés to get its point across. At one point, a character comments that Sy looks like Obama, literally just because he's black and wearing a suit - how such a jaw-droppingly ill-considered joke made it into the final cut is baffling. Elsewhere, the film's refusal to rock the boat infuriates - this is more Sister Act than Caché. That last comparison may seem like an odd one, but in real-life Driss' character was of Algerian descent - a background detail that has been altered here. Whether that was a cynical commercial decision or - more understandably - simply to offer the talented Omar Sy the lead role, we can only speculate and make assumptions. But again it shows the film actively ignoring interesting subtexts. It would be foolish to expect Haneke levels of introspection about French society from a film so proudly lighthearted, but even the slightest attempt to engage with some of the currently relevant topics suggested by the set-up would have lent this hollow film some much needed weight. Instead, Intouchables feels like a relic of a bygone era.

Barring a slick opening credit sequence / car chase (!!!) and a jaunty paragliding session, the film is also decidedly lacking in visual style or identity - The Diving Bell and the Butterfly this isn't. It's well enough paced, granted, but as the film continues on there are few scenes that earn their keep. Phillipe teaches Driss to engage with his artistic side and high culture, and Driss encourages Phillipe and his uptight companions to let their hair down and have some fun. Based on true events or not, we've seen this story a hundred times before. And we've seen it told much, much better. Luckily gifted with irresistible performances and accessible (to a fault) storytelling, it's easy to see how Intouchables bewitched such a wide audience, even those who would usually avoid international cinema. But this is just Hollywood's most familiar tropes and clichés repackaged in French language - if this was an American studio film (and it's no surprise the Weinstein's jumped all over it), it would justifiably be ripped apart. Occasionally Intouchables manages to be charming and moderately amusing, but the cost is just too great.
Posted by thecynicalgamer at 6:25 PM