This article is part of a year-long feature - watching and blogging about twenty acclaimed, cult, challenging and rare films over the course of 2013. The full list of films can be found here. Part four: a double-bill from the late Chris Marker with Sans Soleil and the short La Jetée. 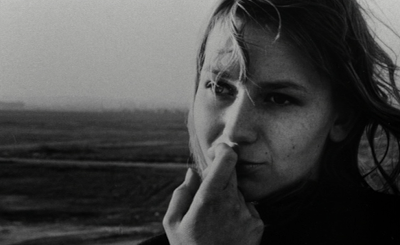 La Jetée is perhaps best known as the inspiration for Terry Gilliam's manic time-jumping thriller Twelve Monkeys - not so much a traditional remake but rather an affectionate re-appropriation of the general concepts, themes and iconography. Twelve Monkeys is a perfectly likeable and unusual film, but the original in this case is very much superior. The film's loose, drifty narrative concerns a survivor of a near apocalyptic third World War whose nuclear fallout has driven the remaining humans underground. A Parisian prisoner (Davos Hanich) - obsessed with the memory of a vague, witnessed tragedy from his past - is sent back (and ultimately forward) in time to prevent the collapse of society. In the past he meets a woman (Hélène Chatelain), who featured in that formative memory of his. The two form a romantic, almost philosophical bond, which is ultimately interrupted by the demands of the prisoner's future 'mission'.

The most striking feature of the twenty-five minute long film is, of course, that the whole thing plays out (almost) entirely through monochromatic photographs, ponderous voiceover and an atmospheric sound-scape. The only diegetic dialogue are some untranslated and almost inaudible German language mumblings. There's only one moving image. The results are startlingly distinctive even half a century later. The form is majestic, but what ultimately propels the film to true timelessness is the purity of its fantastical vision. This is a great science-fiction movie. Not only does Marker imagine a vivid futuristic vision through the memorable production design and 'stock' photography of ruined cityscapes the film's grand concepts are explored to exhilarating, thought-provoking effect - all through imaginative utilisation of extremely limited resources. There have been plenty of good to great time-travel films produced, but few if any offer the same deep reflections on mortality, memory and indeed the sheer transience of time - all themes that are ultimately the very foundations of fantastical fiction, especially of the time-jumping kind. The ending is a heartbreaking, poignant punctuation mark - suitably wrapping up this short story as the protagonist achieves a moment of pure yet tragic insight. Twelve Monkeys re-appropriated the moment, but only here it is truly devastating.

Ruminations on time, mortality and travel (of a more physical sort) heavily shape Sans Soleil, an even more experimental feature (even if the images are moving this time around). For a director who often downplayed his authorship - the end titles only offer a modest 'Conception and Editing' credit - his films are remarkably distinctive: actually, more accurately, completely unique. Not only are the two films discussed here thematically linked in ways both subtle and obvious, Marker's films are often dominated by recurrent obsessions and motifs. Here, imagery of cats and owls - two animals he was particularly fond of - are omnipresent. Sometimes the narrator (Alexandra Stewart in the English language version) directly ponders these creatures, other times their presence on the screen is to transition visually and thematically from one freewheeling thought to next. 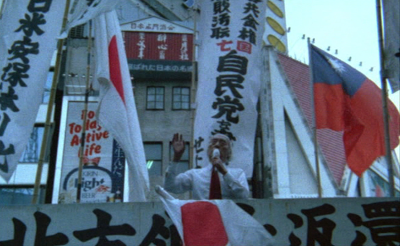 The narrator - not to much of a stretch to consider her as an avatar of sorts for Marker himself, although the director's playful distortions of concepts of perception and perspective make such simplistic pigeonholing a touch futile - reads from letter ruminating on travels through Africa, San Francisco, Iceland and, most prominently, Japan. The poetic voiceover narrations of La Jetée is retained, albeit the film offers no traditional narrative to speak of. The closest comparisons are the likes of Man With a Movie Camera, Baraka / Samsara and the Qatsi films. Drawing heavy inspiration from Vertov's hugely-influential silent classic, the films of Ron Fricke and Godfrey Reggio are all basically very pretty and new-agey reflections on life, the universe and everything propelled by epic soundtracks - they're all very watchable, but at the same time a little oversimiliar. Sans Soleil is different, and not only due to the low-fi 16mm cinematography. It offers a non-narrative experience driven by its atmospheric, moody voiceover and rich thematic scope. It is a genuine original, a compelling 'essay film' really only matched by Marker's own filmography and a handful of his peers & collaborators.

It's a wonderful exercise in cinematic editing and storytelling, even if 'story' is stretching it a bit. The progression from one idea to the next is always handled with great elegance. A particularly hypnotic section uses the movement of trains entering and exiting the frame to lead into a dreamy tangent about the consumption of culture in the Tokyo metropolis. Elsewhere, the Japanese ritual of burning dolls to 'release' their souls contrasts beautifully with the late film images of an Icelandic village covered in the ash of an erupting volcano. Shots of rallies capture some of Marker's strong socialist sensibilities without feeling too on-the-nose, instead leading to further reflections on the strange beauty of social dynamics. Another segment contrasts the strange contradictions of Japanese censorship - the heavily altered late night television vs the overtly sexualised religious imagery and a museum showing animal coitus in extremely graphic detail.

One of the prevalent themes in the film is the nature of images themselves, particularly the 'reality' of the cinematic image. Footage is fed through an electronic 'synthesizer' to lend it a new, constantly variable 'meaning' - Marker revisits these distorted images constantly throughout the film. In the middle of the film, Marker / the protagonist even travel to San Francisco to supply a passionate, analytical celebration of Hitchock's Vertigo - for Marker (and, going by its newly earned 'greatest film of all time' status in Sight & Sound, many others too) the only truly cinematic representation of memory and obsession. This is a provocative essay about the very form of cinema, while also remaining a fully formed piece of cinema on its own terms.

There are so many themes one could pick to sift through over the course of Sans Soleil's ninety-eight minutes: the film retains a stead flow of observations and ponderings. But it's the experience that bewitches most - a singular stream-of-consciousness, with a collage of video and a soothing narration directing your thoughts & emotions in all manner of intriguing directions. Just like La Jetée - for home releases the films are almost always bundled together - Sans Soleil is a film that intellectually provokes, but more immediately seduces your senses.
Posted by thecynicalgamer at 5:26 PM