This Is Not a Film

Rebel With a Cause 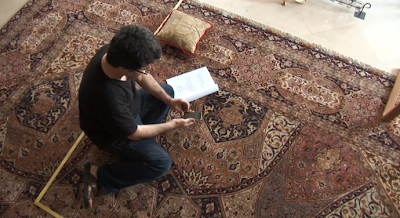 At the risk of gross simplification, there are two types of successful films, both being a pivotal part of a healthy cinematic landscape. There's the frivolous type - that may be wonderfully crafted but don't really have anything new or of note to say. That's not a criticism or anything. But there is another, albeit rarer, type - the important film. A work that genuinely advances the medium or has something of real worth to express.  This Is Not a Film fits snugly into type B, although as the title helpfully suggests 'film' might be too inaccurate a descriptor.

This Is Not a Film is a work put together by Mojtaba Mirtahmasb and Jafar Panahi. The latter is the subject - an acclaimed Iranian director sentenced to house arrest (alongside actual prison time) and a twenty year long travel & filmmaking ban by Iran's ruling regime. Restricted to his apartment block, one day in March 2011 (going by images of the Japanese tsunami on television and the fireworks festival audibly raging on Tehran's streets throughout the film) Panahi starts recording himself with a video camera and his iPhone. Later in the day, Mirtahamasb shows up to help out and wield the camera. Over the next hours Panahi talks with his lawyer (not the most optimistic of phone calls), acts out scenes from the unfilmed script that earned him his punishment, ruminates on the nature of cinema, (hilariously) deals with a neighbour trying to find a temporary home for her unruly dog, and takes an extended elevator ride with a near-stranger taking care of the trash in Panahi's apartment block.

Rarely has a film featuring so little traditional drama been so absolutely compelling. This is a portrait of a creative soul unable to bring his ideas to life - and so he protests against the censorship of his work in his own modest, admirable way. Throughout the film he wonders if he's making a film or not, subsequently perhaps opposing the bans opposed on him - is casually wielding an iPhone camera or reading from a screenplay considered filmmaking? It's a 'film' with a very loose form, but fittingly so: the impossibility of simple definition is not only a challenge to Panahi's oppressors, but also a triumph of imagination and artistic rebellion. It consistently questions ideas of authorship. In one devastating scene, Panahi breaks down when trying to explain a scene from his screenplay and has to leave the room. A simple, powerful image of an artist unable to realise his vision through no fault of his own.

This is not a film of overt politicisation, though, even if the film ultimately had to be smuggled out of Iran for its Cannes' premiere hidden in a cake of all things. Panahi never explicitly comments on his situation or attacks his government. It is a film of great subtlety. When he chooses to show two scenes from his previous films Mirror and Crimson Gold with resonances to his own situation, his commentary does not overwhelm. For a film set almost entirely in a single apartment with a handful of speaking 'characters', it is also a fascinating insight into the life and attitude of Iranian citizens. The final shot simply shows a raging bonfire outside the apartment block (Panahi cannot step outside the gate, let alone let his camera be seen) - the spirit of domestic protest may not be confined to Panahi and Mirtahmasb's film. For the Western viewer this is a (self?) portrait of strong-willed, relateable people stuck in extraordinary circumstances - although for the people represented everything is absolutely ordinary.

Devoid of traditional narrative and inevitably rough-and-ready - several scenes see Mirtahmasb and Panahi lightly argue about the technical quality of the images they're capturing -
This Is Not a Film is nonetheless a triumph of cinematic form. As Argo - very much a frivolous type, and not a great one by any stretch - enjoys hyperbolic reception, This Is Not a Film with its honest, insightful and intelligent examination of Iran and one of its great artists has never been more vital. It is brave and bold, but more than anything it's important.
Posted by thecynicalgamer at 3:59 PM