This article is part of a year-long feature - watching and blogging about twenty acclaimed, cult, challenging and rare films over the course of 2013. The full list of films (and links to other completed posts) can be found here. Nine: a night of humour, violence and social commentary as we Attack the Gas Station! 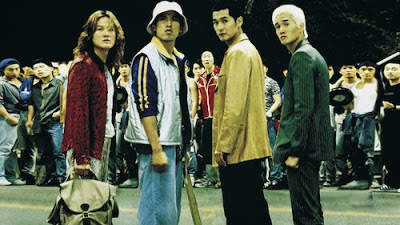 I first heard about Attack the Gas Station! several years ago while browsing through an edition of one of those '1001 Movies Before You Die' books. The short essay about the film, as well as its excitingly exclamatory title, piqued my interest immediately. Regrettably, the film has long since been unavailable on European DVD (if, indeed, if was even released in the first place, an uncertainty my very brief research has failed to illuminate). The film - and I'm merely theorising here - was perhaps unlucky enough to burst onto the scene just before Oldboy, A Tale of Two Sisters and the whole Asian Extreme craze which, for a period, ensured any vaguely provocative Korean film enjoyed a healthy release. This particular film enjoys a relatively healthy fanbase in States, but maybe arrived at just the wrong time to disseminate beyond the enthusiast importers of Europe.

The thing about Attack the Gas Station!, though, is that it couldn't really have been made at any other time than 1998-99. Watching ATGS is like being directly transported back a decade or so to a rapidly changing time in society. On a surface level, you have the cheesy pop & rap that defined the soundtrack of a generation, all blasted out through good old cassettes and boomboxes (the film does, however, offer what surely must have been one of the first cinematic discussions about MP3 players). The camera has the slick, youthful energy of many of its contemporaries - the output of Tarantino, Soderbergh, Rodriguez - although also proudly individual in its constant movement, twirling, twisting, panning and jittery enthusiasm (rapidfire editing helps, of course). It also reminded me of a bolder, more stylistically ambitious Empire Records - another pop-culture savvy, playfully anti-authority 90s cult hit - although I'm not sure how much scrutiny that comparison would hold up to, so let's just leave it at that.

Attack the Gas Station!, while ostensibly as wacky and irreverent as cinema gets, is also a surprisingly allegorical portrayal of the time period it burst out of. It places us in a South Korea of class division, dissatisfied youth and rapid globalisation (how apt, then, that the film's aesthetics owe more to a range of international culture than traditional Korean identity). Mass unemployment and economic turmoil are concepts lingering in the background throughout the film, while authority figures, when they do happen to stop by the filling station, are personifications of corruption and greed. The protagonists of Attack the Gas Station! might be four young delinquents who decide to semi-violently hijack the eponymous business out of sheer boredom, but they're not the bad guys.

That said, while director Sang-jin and screenwriter Park Jung-woo's sympathies clearly lie with the four youths, they also operate on a slightly more involved level than simply providing a straight-up working class revenge fantasy. As the rebellious youngsters wrestle control from the petrol station's obnoxious owner and his confused employees, they choose to take revenge on the customers, staff and visitors who disrespect or irritate them. While this mostly plays out as a light-hearted descent into anarchy, but there are a few scenes where Sang-jin pushes their actions into less justifiable, triumphant territory - most notably in one scene towards the end that has a more uncomfortably sexualised element. The film stresses the need for the youth to get out there and make a difference, while also perhaps urging some degree of restraint. The filmmakers also probe the motivations of the teens (or twenty-somethings?) through brief but very effective flashbacks that contextualise their dislike of establishment and formative disappointments.

The film isn't without depth then, but a name like Attack the Gas Station! rightly hints that fun is high up the list of priorities too. In that regard, the film doesn't disappoint. As previously mentioned, the madcap style is a vital element in enhancing the film's 'anything goes' attitude. The performances are also charismatic - the finest comic creation being the endearingly psychopathic (there's a word combination you don't write every day) Mue Dae-po or Mad Dog (Yu Oh-seong). The film is witty, satirical, wacky and farcical, all in equal measure. And it works, even if the film's unrelenting assault can feel exhausting at times.

Come for the humour and allegory, so, but stay for the setpieces. The film, all set over one manic night, is basically a series of ever-escalating brawls, with more and more people ending up involved in the conflicts created over a very busy twelve hours. The fights and chases grow in scale and absurdity, hurdling towards an insane finale in which various warring factions all face off against each other in the petrol station's main yard (speaking of which, the film also makes damn good use out of limited space). The battle only stops when our lead (anti)hero No Mark (Lee Sung-jae) threatens to blow the whole place to smithereens. The director resists the temptation to blow-up the gas station, but really the film has offered so much explosive energy up until that point it doesn't need a literally explosive punctuation mark.
Posted by thecynicalgamer at 11:51 PM