The Act of Killing (Joshua Oppenheimer, 2012) 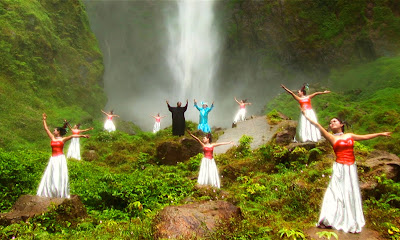 Jim Carrey made minor headlines the other day for announcing that in the aftermath of Sandy Hook, he would feel uncomfortable promoting his work in the forthcoming Kick-Ass 2 and hence has withdrawn his support for the endeavour. Criticisms of hypocrisy weren't far behind - after all, if Carrey is so vocally anti-gun / anti-violence, why did he sign up for the film in the first place? I'd be inclined to at least partially sympathise with Carrey (mostly because I think Mark Millar's aggressively immature work favours cheap, empty shock value above all else). But more than anything it reopened that seemingly endless debate about the connections between screen violence and real violence.

It seems a shame that fewer people will experience The Act of Killing than Kick-Ass 2, because the former serves as a most fascinating, provocative examination of the relationship between real-life violence and cinematic representations of the same. The film is focused on Anwar Congo - a self-proclaimed gangster who was personally responsible for hundreds if not thousands of deaths during a horrific genocide in Indonesia in the mid-1960s. The extermination of so-called 'communists' (a loose concept in this disturbing context) led to the rise of the militant and criminal gangs instrumental to the mass murder. Indonesia today is ruled by individuals loyal to the same groups, if not active & proud members. People like Congo are hailed as heroes and deeply respected / feared (depending on who you ask). The racism, paranoia and groupthink that led to anywhere from half a million to 2.5 million murders have become institutionalised. Anyone who questions it will be outcast or punished - no surprise the film's credits have so many 'anonymous' participants.

Director Joshua Oppenheimer approached Congo and his associates, who were all too willing to discuss and even boast about their actions almost fifty years ago. The film's big 'concept' is to grant them the opportunity to film their experiences in their own way - to tell their stories through cinema and to 'act' out the killings. They embrace the opportunity wholeheartedly. The results are blackly comic, surreal, shocking and absolutely harrowing.

Congo and his wide pool of friends & associates - including the vice president and other government ministers - are constantly referencing 'gangsters' (a word, they with great frequency emphasise, deriving from the concept of 'free men'). They're proud of the association, the vast criminal and paramilitary underbellies of Indonesian society supposedly keeping the bureaucracy in check. Perhaps most fascinatingly, Congo and others point out how they were inspired by classic Hollywood gangster films: not only by the lifestyles, but also - more disturbingly - the murder methods. Congo happily admits he adapted his most common killing method of strangulation with wire ("the easiest and cleanest way to take a human life", he enthusiastically informs Oppenheimer). It's a curious subtext running throughout the movie that really encourages us to evaluate the deeper affects of screen violence. It's an easy thing to say there's no real correlation between cinematic violence and actuality, that it's all harmless, but The Act of Killing quietly but intelligently offers a commentary on how that might be an overly simplistic reading. It has no definitive answers or opinions on the subject, but it asks us questions, and we are encouraged to engage.

Of course, the whole allegiance to the gangster film is just one example of the people involved attempting to justify, contextualise and reason their way through frankly unforgivable atrocities. Some are remorseless - one man who shows up to participate in the project tells us he has no qualms whatsoever about his role in the genocide, and he'd actively welcome being tried as a war criminal so he could happily tell the world of his lack of regret. He chooses to depart from the project when he realises it'll be more of a critique than celebration of their activities.

Congo is more psychologically uncertain, if not straight-up contradictory at times. On the surface, he's stable and proud. But he has nightmares, and is haunted by images of decapitated ghosts - images that come to play an instrumental role in the recreations they're producing. As the project progresses, he becomes more and more uncertain about it all. When they stage a visceral recreation of a film massacre, the 'actors' embrace the chaos and the 'role', some of the 'victims' genuinely upset & injured even though it's all just 'acting'. Congo watches on conflicted. At the start of the film, he casually explains his methods for torture and killing. At the end, he revisits the scene of most of his murders and he's physically ill at the thoughts and memories it brings to the fore. It's a upsetting journey to witness - a cold-blooded mass murderer (who, we can never forget, not only got away with it but was rewarded for it) psychologically and belatedly atoning for his crimes on camera even as he tries to dismiss the emotional rollercoaster he's stuck on. It's not something we're necessarily comfortable with, but it makes for deeply affecting viewing.

The film does somewhat lure us into a false sense of security. Despite the film emphasising from the off the backgrounds of the people on-screen, Oppenheimer's film is initially surreal and even blackly comic. There's an absurdity to it all, even when the participants casually explain deplorable deeds - the strangeness of their costume choices, the bizarreness of the individuals, the awfulness of their filmmaking. The casualness, banality and hypocrisy of the way they discuss appalling stuff is bemusing, like how they interrupt a brutal recreation of a murder because it's prayer time. We always feel guilty for laughing, but at some points it's a real challenge not to. But the laughs grow fewer as we progress. By the time we get to the aforementioned 'village massacre', and one paramilitary casually jokes about how he raped fourteen year old girls, we're into straight up horror film territory. The film's main surreal setpiece - involving a giant fish, dancing girls and a waterfall - is initially just really strange, but when we revisit it later on it's in a new & sobering context that takes it to a whole new level of terrible, terrible beauty. It's an intense experience, diving deep into the darkest, most intimate recesses of humanity, but it's impossible to look away.

Of course, like all documentaries this powerful, a few lingering questions remain about how 'genuine' it all is - how much of the profound emotional catharsis was achieved through careful manipulation and editing? Given Errol Morris and Werner Herzog act as executive producers, it's comforting to know that there was genuine masters guiding Oppeneheimer along the way. But what allows the film to easily overcome any such criticisms or concerns is that its very form acknowledges that oftentimes blurry line between film and reality, the deep complexities of 'truth' searching. It's both dreamlike and disconcertingly grounded. It's equal parts raw and fanciful. It achieves what it does through careful deconstruction of cinematic form, and in that sense it completely earns its payoffs, regardless of whatever trickery may have been going on behind the screens. This is as creative and provocative as filmmaking, documentary or otherwise, gets. It's the kind of film that will leave many people, once assumed desensitised, shaken. It's the kind of film that left me angry, saddened and inquisitive. I was left, in no uncertain terms, shellshocked.
Posted by thecynicalgamer at 9:07 PM