This article is part of a year-long feature - watching and blogging about twenty acclaimed, cult, challenging and rare films over the course of 2013. The full list of films (and links to other completed posts) can be found here. Twelve: one of Ozu's most beloved silent efforts I Was Born But... 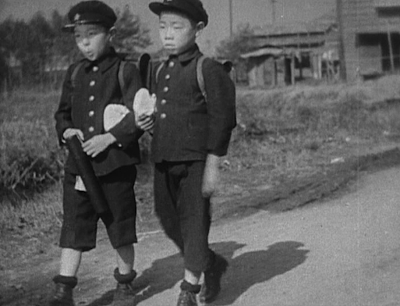 When I went to pick up a copy of Ozu's I Was Born But..., knowing little about it other than it was widely considered one of his silent masterpieces, I was wondering why it only came bundled with Good Morning. Only when I read into it did I realise the later film was a 'remake' of the earlier one - although then again the Floating Weeds films are only occasionally double billed. After watching, however, I realised the decision was a sensible, even wise one. One of the great privileges granted to us modern film fans is the ability to watch films in their wider context - whether that's in terms of a director's own career or a more general sociological one. Having seen both film I know realise it would almost do a disservice to separate them and run the risk of viewers missing out on one or t'other. As a pair, they resonate and contrast with each other in fascinating ways.

The most obvious thing to note about the 1933 film is that it has a much harsher, borderline cynical edge to it than the later one. Make no mistake: this is still an Ozu film, and there's still a deep affection for the characters being portrayed alongside moments of lighthearted comedy (certainly fewer fart jokes than Good Morning). There's also what we might call a 'happy ending', even if that does a disservice to the more complex psychology and drama at play. Nonetheless, there's a a discernibly different vibe to proceedings, and that's not just down to a (personal opinion alert!) slightly ill-fitting musical accompaniment included with the BFI release.

It's the way the kids are portrayed that perhaps exemplifies the film's darker edge. There's a scene early on where the two brothers Keiji and Ryoichi Yoshio (Tomio Aoki and Hideo Sugawara) confront a gang of local kids. The brawl that ensues is more aggressive than anything in the later film, although still firmly in the realm of childhood hijinks. I Was Born But... is the product of more fiercely nationalistic times, reflecting the defensive (and ultimately aggressive) posture the Japanese were forced to adopt in the 1930s. Indeed, when quizzed about their future plans, the two siblings in the middle of the drama declare tellingly militaristic dreams. The children of the earlier film are more willing to fight for superiority where the Good Morning bunch resort to flatulence contests. Nearly three decades separate the two films, and society shapeshifted completely in the interim.

Where the films most prominently share a thematic and narrative concern is in terms of the way the young try to make sense of their parents' actions. In Good Morning, it was the kids' bemusement at the meaningless pleasantries and salutations of the grown-ups. Here, in the absence of a TV set to get flustered about, it's their fathers obedience to his boss that gets them confused and angry. They've been forced to move to the desolate Tokyo suburbs so their father Kennosuke (Tatsuo Saito) can be closer to his superior. Their disgust at his 'shameful' carry on during a home-movie screening at the manager's home is the catalyst determining the hunger strike the two boys briefly decide to wage against their parents (this concept was developed further in Good Morning, with an accompanying vow of silence striking a deeper aesthetic punch in the realm of sound cinema). In both films, a compromise and vague understanding is eventually reached between adults and youngsters, and Ozu does cheekily illustrate how easily the seemingly unbreakable protest of the kids can be shattered by the offer of a simple rice cake. Still, like the rest of the film, there's something much more determined, even militant about Keiji and Ryoichi's strike than anything that goes on in Good Morning.

I'm making I Was Born But... sound miserable, aren't I? I can only restress that the film is full of compassion and humour alongside the darker undercurrent. They're both ultimately triumphant celebrations of the innocent uncertainty of childhood - a theme developed beautifully by Ozu, whose efforts continue to directly inspire Hirokazu Koreeda in particular. Heck, the director even finds a sort of poetry in the routine of the adults - they're aware of the limitations society places on them, and still choose to live life with passion and enthusiasm.

The film, naturally, is as formally elegant and intoxicating as you'd expect from Ozu, if inevitably a tad rougher as he worked to bring his singular stylisation to perfection (and his famed low angles always seem even more appropriate when articulating the perspective of kids). But even a rougher delivery suits the film, given there's that dirtier, harsher vibe to proceeding. It's a real treat being able to watch the results of what happened when a great director decided to tell a story twice, with variations both major and minor. Thrillingly, we've been gifted both of them on one disc. Modern times, ey?
Posted by thecynicalgamer at 9:03 PM