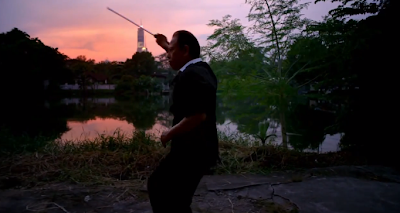 Drive - need I stress IMO? - was an extraordinarily slick, fitfully hypnotic film that often frustrated as result of its militant coldness. But it just about came together to create a work of contemporary cinematic cool, even if its hollowness left me a tad sceptical. Regrettably, director Nicolas Winding Refn's follow-up Only God Forgives exaggerates Drive's questionable qualities to extraordinary degrees. It's still somewhat of an impressive aesthetic and moody accomplishment, but the film's self-consciousness and self-seriousness ultimately crush it.


Emotional distance, it should be said, is a perfectly valid cinematic approach, perhaps most productively utilised by the various practitioners of the French New Wave. In the great films of Godard or Resnais, diegesis is broken with casual but considered frequency, often requiring us to renegotiate our connection with the film - often to draw attention to the nature of the cinematic form itself, or the sometimes cheapness of typical mainstream storytelling. Similar techniques can be seen in the films of, say, Stanley Kubrick or Abbas Kiarostami. What separates these filmmakers from those of Refn is that they offered (or offer) depth and intelligence that utterly justified the cinematic distance.

Only God Forgive’s most unforgivable problem is how mechanical it all is. Credit where credit’s due: the filmmakers and their technical assistants did a damn good job building a posse of lifelike robots. Remote controlled copies of human beings both recognisable and less so take the place of actors: as a sheer technical achievement, it’s impressive, but regrettably we’re in the deepest realms of uncanny valley when they actually are required to do anything. Goslingbot is, on the surface, an almost uncanny recreation, but ultimately proves to be a hollow emulation of the real thing – taking all that actor’s most frequently satirised qualities and amping them up exponentially. Scottthomasathon’s facial reconstruction is only rarely convincing, but its acting algorithm is a tad better than the rest of the automatons on screen. Still, given that dead-eyed doppleganger vibe they all give off, it’s no surprise Refn only occasionally directs them the ‘bots to do anything more complicated than walking down a hallway or staring moodily off into the distance. That, or yet another extended karaoke scene.

Joking aside, and even with a cast of actual humans, the film really is painfully artificial. I was never less than intimately aware I was watching a film, the gears working away in full view. Everytime there’s a dramatic pause, or an extended shot of someone walking down a road or hall, you can almost hear Refn directing ‘long beat’ off camera. It’s contrived beyond reason, taking that considered pacing of Drive and radically overcompensating. When characters do break from the hilariously sincere posing to say something, it’s in an awful, distracting robospeak. There’s no problem with having unlikeable, cold-hearted and emotionally distant characters, but this film has been drained of humanity so completely it’s off-putting.

To further sabotage the audience’s attention, Refn’s content is often desperate in its attempts to bait controversy – whether that’s excessive violence or just general provocation. A centrepiece scene where mother, son and fake girlfriend have dinner while mother speaks about how she considered ‘terminating’ son is so ridiculous and adolescent that the overriding emotion is one of pity for the poor cast members – two of whom are proven acting forces to be reckoned with - engaging in this alarmingly misjudged dialogue exchange. It almost goes without saying that there’s an uncomfortable undercurrent of misogyny to proceedings. There’s no doubt we’re very purposefully witnessing a world that has been designed as an stylised hell on Earth, but even allowing for some degree of cartoonish excess, Refn remains among the most aggressively masculine of contemporary directors. 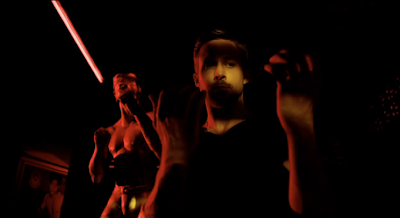 Visually at least the film is rather striking. Yes, most definitely: the Thailand setting is impressively utilised, full of vibrant primary colours (red being the overriding palette because, y’know, violence and all that). Occasionally, the drifty camerawork harmoniously combines with Cliff Martinez’ sometimes effective, sometimes distracting soundtrack to create a temporarily intoxicating mood. There are sensory treats on offer here.

But even in the visual department – and the cinematography is no question the film’s greatest asset – there’s that recurrent sense of trying too hard. The camera tracks without much meaning or motivation. The editing is confused and jittery, never settling on a truly engrossing pace – it feels, bizarrely, both overeager and overdeliberate (as a result, the film’s modest running time feels like a minor eternity). Eventually, you even get tired of characters framed right in the middle of beautifully extravagant symmetrical rooms. We’re right back to that overwhelming sense of artificiality – every single shot has been obsessively considered and storyboarded, but instead of drawing us in it just leaves us removed as it repeats its handful of aesthetic tricks. Tied with the unrecognisably human characters, the film’s polar coldness cuts right through the skin.

So much of this wouldn’t matter if there was any justification for keeping us at such a distance. But no, it’s all window-dressing for what is far too often little more than a bog-standard, direct-to-video revenge thriller. The psychology – from the examination of the relationship between repressed sexuality and explosive violence to the incessantly incestuous undertones – is simplistic yet borderline nonsensical (thematic coherency is not very far up the list of Refn’s agendas). I used the word adolescent already, but it is the only appropriate summation of the film’s narrative preoccupations. Refn has explained the film as basically the story of a man who wants to fight God. That gives you a sense of the general absurdity on offer here. He's also confessed that he considers himself as a mere pornographer - that I am inclined to agree with.

So far, so dreadful. That is, perhaps, until the film’s almost final moments (there’s one more extended karaoke sequence to endure before / during the credits), where Gosling’s character Julian has his literally blood-stained hands literally cut off by Vithaya Pansringarm’s Chang (aka the ‘God’ of the title). It, strangely enough, actually feels like a relatively satisfying moment of catharsis that, in a surprising way, even makes sense of some of the earlier stuff. It’s a moment of vengeance, forgiveness or maybe even emancipation performed by some sort of hybrid Old / New Testament deity personified – a heady mix of emotions that almost encourages us to re-evaluate what came before.

Almost is the key word there. It may end on a brief, tantalising high, but there’s no getting over the endurance test that is watching 97% of this film. A somewhat chilling conclusion is nothing but the smallest reward for suffering through all the childishness, empty stylisation, simplistic characterisation and overwhelming stench of smug silliness off the whole thing. It’s not for lack of trying that Only God Forgives doesn’t work, but more because it tries too hard: so desperately, desperately hard. God eventually forgives – or is that punishes? – but sadly it’s a favour I was unwilling to return.
Posted by thecynicalgamer at 8:52 PM