This article is part of a year-long feature - watching and blogging about twenty acclaimed, cult, challenging and rare films over the course of 2013. The full list of films (and links to other completed posts) can be found here. Fourteen: a little bit of everything with Yi Yi. 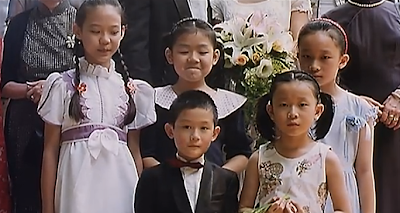 Ah, the 'everything' film: the product of a director who, in a fit of wild ambition, tries to summarise the entirety of the human condition in one single feature. It is, by its very nature a crazy, impossible task, but it has made for some of the most fascinating films ever created. In recent times, we could count the likes of Synecdoche, New York and The Tree of Life as films that paint on the grandest canvas imaginable, and the results have been as fascinating as they have been polarising.

Yi Yi, from the late Edward Yang, operates on a similar level. Yang stated as much in the booklet accompanying the film's Criterion release: "this film is simply about life, portrayed across a spectrum of its span". Trust the director to summarise his goal so perfectly: this is a film equal parts epic and intimate, modestly focused and insanely ambitious.

The film is, on the surface focused, on one extended family, with Yang particularly drawing attention to the actions of middle-aged NJ (Nien-Jen Wu), his teenage daughter Ting-Ting (Kelly Lee) and his young son Yang-Yang (Jonathan Chang). It might be the story of one Taiwanese family, but through these avatars we witness a whole range of universal emotions and experiences. These three characters, and the various others they encounter both briefly and intimately, allow Yang to examine life, death, love, spirituality, humiliation, disappointment, curiosity, joy, depression, surprise, youth, aging, hope, ambition, broken hearts and everything in between. This is all resolutely done without the pretension the likes of Malick and Kaufman are so often (and often unfairly) accused of - instead, Yi Yi is always modest and warm-hearted, full of affection for the fictional individuals rushing through life on screen. It's no surprise the film has achieved a critical consensus other more experimental offerings have not - its soulful simplicity makes it incredibly difficult to bear any ill-feeling towards it.

Simplicity might be a misleading word, because this is very much a masterful cinematic creation despite its resolutely sensible presentation. Yang's fingerprints are equal parts invisible and definite: so clearly painstakingly crafted, and yet it comes across as something almost effortless. The script, for example, is full of beautifully poetic dialogue that nonetheless flows incredibly naturally - the scenes with a Japanese game developer (Issei Ogata) are particularly insightful, integrating deep and provocative philosophical pondering into credibly casual conversations in bars, restaurants and hotel lobbies. All of this is achieved without shortcuts like voiceover: the writing is constantly enhanced by Yang's subtlety and care, achieving a zen-like balance between 'reality' and 'cinema'.

The gorgeous cinematography - full of hypnotic, naturalistic long-takes - also allows us to appreciate one unavoidable fact: Yi Yi is a great city film. Actually, it's a great cities film, as it allows its characters to traverse both Taipei and Tokyo (the former the familiar home of NJ's family, the latter the foreign setting for what will prove his most formative adventures). Characters are frequently seen behind glass or staring out at the metropolises - a neat little visual summary of how the film manages to be concurrently intimate and grand in scale (although the glass perhaps serves a secondary function: as a subtle but consistent reminder that, despite Yang's quest to capture life as we know it, we're an audience staring through a screen at these fictional characters).

While the film's naturalism is one of it's most defining traits, it offers moments of distinctly filmic bliss. In one of the film's most spine-tingling sequences, NJ's rekindling of a youthful romance on a Japanese business trip is contrasted with Ting-Ting's first real date back in Taiwan - incredibly expressive storytelling achieved entirely through editing, visual echoes and dialogue contrasts. It's also a film obsessed with time, and all characters are motivated by their past, their current situation and their future dreams, and a near constant battle to reconcile the three. Even the cityscapes reflect this conflict - tradition and history existing side by side with high-rise buildings and McDonalds restaurants.

There's a great scene where one character observes that we live twice as long since the dawn of cinema, because of the range of emotions and drama it allows us to experience. We can experience the joy of romance, the pain of tragedy, the thrill of adventure, the disturbing mind of a psychopath, the secrets hidden behind closed doors. Yes, cinema gifts us the chance to witness endless permutations of all these and more, through a vast and culturally diverse spectrum. Yi Yi itself is that thesis' most persuasive proof.
Posted by thecynicalgamer at 6:55 PM