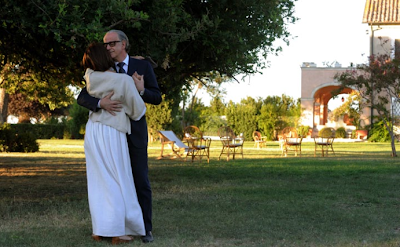 The Great Beauty announces itself as a film for the big-screen early on, and retains that status for the entirety of its 150-odd minutes. An offbeat, stand alone prologue is the perfect introduction to Paolo Sorrentino's sumptuously strange odyssey. In both stylistic and thematic terms, it's as good a primer for what follows as one could hope for. Rapidly and poetically editing between various different groups - a choir, local workers, early morning strollers and a group of Japanese tourists (one of who ultimately expires in what's implied to be a state of euphoria) - it is full of the swooping, restless tracking shots that are the core signature of Sorrentino's visual style. On a deeper level, too, it's a smart bit of narrative foreshadowing - the conflict between the ancient and the modern, the obscene and the beautiful, life and death.

It's the second scene, though, that acts as almost the true opener. Here, we're invited into the narrative proper, though a blisteringly edited, vibrantly scored and just generally breathtaking party scene. Here, perhaps more than anywhere else in the film, Sorrentino provides no doubt about the world we're in - contemporary Roman high society in all its awful beauty. It is, in so many ways, absolutely vile - a world of obnoxious pretension, staggering excess and complete artificiality. But, assisted by the film's ravishing style, it's also exciting and vibrant, almost gifting access to this part of society that's out-of-bounds for most of us. Sorrentino pulls few punches, either: in the latter half of the film, a few encounters with an arrogant cardinal make it abundantly clear that our director places little value in the religious institutions of Rome.

Our guide through this hellishly compelling overworld is Jep (Toni Servillo) - an aging writer experiencing what we might call a three-quarters life crisis. Jep has spent around four decades in an endless party - at one point, for example, he awakes early and is left genuinely baffled about what to do during daylight hours. He's undoubtedly charismatic, effortlessly able to woo and charm those around him (even if he has only been able to make a deep connection with a handful of his regular acquaintances). He's also kind of a dick when he wants to be. In one very memorable early scene, he performs a jaw-dropping character assassination on a fellow writer after an arrogant boasting session, completely destroying her personal wall of proud delusions. It's both shocking and extremely funny (the film, it must be said, is consistently hilarious), and a great example of what makes Jep such a memorable protagonist - at times, he can be an asshole, but he's also smart, relateable, honest and human.

That last word is key. In another extraordinary pair of scenes, we see Jep inform his new, younger girlfriend Ramona (Sabrina Ferilli) about how he uses funeral to cheekily reaffirm his status and presence in society through attention grabbing but 'empathetic' stunts. His one rule? Don't cry, as the mourners deserve something of their own. In the subsequent funeral scene, he of course breaks down into tears. Is this his deep-down humanity finally manifesting itself in a public space, or is he taking his lifelong act of social manipulation to a staggering new extreme. Perhaps most interestingly of all, could it be a bit of both?

As emphasised through Servillo's superb performance, The Great Beauty is, underneath its extravagant exterior, a film of vast emotional depth. One of the factors that left me completely disconnected from Sorrentino's last film This Must Be The Place (review here) was Sean Penn's gimmicky, borderline pantomime portrayal of troubled popstar Cheyenne. While the two films are clearly the product of the same director - they both offer episodic structures, elaborate cinematography, lashings of surrealism and even many thematic echoes - The Great Beauty manages to be cohesive and compelling in a way This Must Be The Place almost totally failed to be. And Jep is central to that success.

We're witnesses to his search for a great beauty of his own and his attempts to escape from a life of extravagance that has long since proven empty, repetitive and creatively destructive. There are frequent references, for example, to Jep's allegedly great first novel and his failure to produce a follow-up. His misadventures in this film - which see him, among other things, re-evaluate his first love, find (and tragically lose, although the delivery of said tragedy is a little confusing) a potential soulmate, confront crises of spirituality and just basically question his whole lifestyle - lead him to a place where he might - it rightly remains a little ambiguous - finally be able to move on with his life and rediscover himself.

The Great Beauty sometimes manages what I sometimes mentally refer to as the 'Murakami effect'. Like some of the more eccentric novels of the great Japanese novelist Haruki Murakami, The Great Beauty can be an overwhelming and deeply evocative emotional watch, even if I'd struggle to articulate exactly why. Sometimes it's crystal clear, such as a particularly extraordinary sequence where Jep encounters the exhibition of a man who has taken a photo of himself everyday since he was a child - the scale of which, for a long moment, reduces our hero to near-tears as it resonates so powerfully with his own ongoing self reflection and ponderings on mortality. Other times, the links are considerably more subtle and surreal, such as an encounter with a disappearing giraffe or the third act tale of a centenarian nun. These compare and contrast with Jed's story in a variety of ways that are equally clear and elusive, but they just feel right. While it sounds like a cop-out on my behalf, it would almost do a disservice to analyse them in much depth, as they just beautifully serve the rich emotional cocktail on offer. Some bits do veer towards twee - such as the visit of a flock of migrating CGI birds (Pelicans? Flamingos? My ornithology is not exactly up to scratch) - but mostly everything comes together in strange and wonderful ways. It is sweepingly romantic cinema that provides countless instant pleasures while also inviting and deserving deeper analysis.

The film concludes with a gorgeous epilogue - a languid camera drift down the Tiber as the credits roll. It doesn't hide any further narrative revelations or resolutions, there's only a few minor thematic emphases to spot, and there's no extra scene hidden at the end for those who sit through it. Instead, it simply serves as the perfect comedown after an intensely beautiful and frequently overwhelming film. Sorrentino opts to bow out with a considered whisper, and it's the perfect way to gently guide us out of this glorious film and back into the real world. It's the rare film indeed that understands exactly when to command the theatre lights to go up - one can only hope all projectionists play by Sorrentino's requested rules.
Posted by thecynicalgamer at 4:56 PM