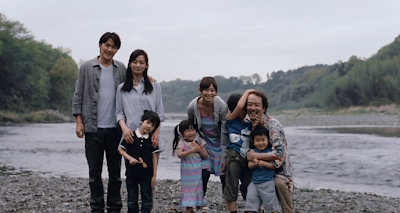 Hirokazu Koreeda is one of contemporary cinema's great magicians. His basic premises are typically familiar, simple, occasionally contrived. In the hands of a lesser storyteller, they could easily, perhaps even inevitably, emerge as eye-rollingly trite and aggressively sentimental. Yet through a singular vision and peerless craftsmanship Koreeda-san has emerged as the successor of Japan's great classicists. A review of a Koreeda film will typically reference Ozu at least once, but the comparison should not be considered a reductive simplification of a man with a cinematic control all of his own. That he justifies such high comparisons is testament to his abilities. Like Father, Like Son is further evidence he is a talent we should yell about with the greatest enthusiasm, less his films fail to attract the audiences they so absolutely deserve.

Despite many of his most beloved efforts being profoundly naturalistic - Still Walking, Nobody Knows, I Wish - Koreeda has also had his fair share of 'high concept' films, particularly After Life and the particularly atypical Air Doll. Like Father, Like Son kind of splits the difference: while the delivery is very much grounded grounded, the setup - two pairs of parents discover their six-year old sons had been accidentally switched at birth - requires a leap of faith on the audience's behalf. Such happenstance is not outside the realms of possibility - there are plenty examples of it happening, and the film seems to indicate at one time in the not-so-distant past there was a spate of such incidents in Japan. Cinematically speaking, though, it's dangerous territory. In a lesser film, such a foundation would result in cheap melodrama or farcical hijinks, maybe even both. Indeed, we don't need to look far to identify examples of that (here's a list).

The grace and sensitivity Koreeda brings instead cannot be overstated. There are emotional peaks and troughs, a stirring soundtrack, and extremely emotive performances, but they're managed so carefully that the film never comes across as cheap or contrived. The music, for example, is rarely if ever used to force feed the audience an emotional cue. And if a character is indeed having a particularly powerful response to something, Koreeda is as likely to give them a moment of semi-privacy by keeping the camera distant or shooting at a less intrusive angle. He probes deep when necessary, respectfully steps back if it benefits the characters and drama. He is the most admirably polite and affectionate of filmmakers.

In the film's second-to-last scene (and effectively its ultimate denouncement), Koreeda shoots an exchange between Ryota Nonomiya (Masaharu Fukuyama) and his newly estranged 'son' Keita (played by Keita Nonomiya, lending his name to the fictional family) on two levels of a split walkway - the trees and height difference a simple but beautiful visual representation of the characters' current relationship. When the paths eventually join, it's truly poignant, and handled without cheap emotional manipulations. It's Koreeda in a nutshell: transcendence through simplicity. Even if he's not the most experimental filmmaker working today, he is an exemplary cinematic storyteller, where payoffs are always hard-won. Even the 'working class vs middle class' conflict at play here is handled in unexpected, intelligent ways that either sidestep the clichés that come with the territory or reclaim them entirely.

Ryota is something of a de facto protagonist here: as the work-obsessed, emotionally negligent father granted of a (sort of) second chance, his journey towards a fresh perspective is very much the backbone of the film. But Koreeda adamant in his decision to provide ample screentime for his whole ensemble, with the result that we feel like we're granted a wide variety of perspectives into an extraordinarily challenging situation. There's Machiko Ono as Midori - well able to see through her husband Ryota's bullshit, and bearing the brunt of the staggering psychological and maternal suckerpunch more-or-less on her own. She eventually finds a companion in Yukari (Yoko Maki) - the other mother who suddenly discovers she's been bringing up someone else's son, but takes the complications that arise in her stride. And then there's her husband Yudai (Lily Franky), who initially seems to be a walking disaster, more concerned with what damages he'll receive from the hospital that a solution to the more pressing paternal questions. But it becomes obviously quickly that he's a loving and lovable individual, his charisma, resourcefulness and improbably good-nature winning over not only the characters but the audience too. They can all hold a scene on their own, but the drama is particularly rich when all these individuals are allowed interact - such as in a fishing trip the two families take together. Through these various perspectives, it feels like Koreeda is well-placed to deeply examine the repercussions of the life-changing revelations they've experienced. Does he succeed? Of course he does.

And then there's the kids themselves. Koreeda has always been a brilliant director of youngsters, but here he turns his usual approach on its head. Whereas I Wish and Nobody Knows both were shot almost exclusively from the kids' point of view - with the adults either non-existent or very much on the periphery - this puts the adults centre stage. This proves to be a wise decision. The responses of Keita and Ryusei (Shogen Hwang) to this almost incomprehensible lifestyle shift are not always explicitly articulated (although occasionally they are, with devastating force). Instead, Koreeda often just provides subtle glimpses of their reactions and responses, and their parents' responses to the same. Luckily, both kids are sufficiently talented young actors that they can load simple, wordless looks with confusion, sadness, bewilderment and the other assorted emotions their characters are feeling. Koreeda, ever the most emotionally generous auteur, has once again found an army of able collaborators. Like Father, Like Son might be unmistakably the work of a great director, but it's also damn good teamwork.
Posted by thecynicalgamer at 12:35 AM