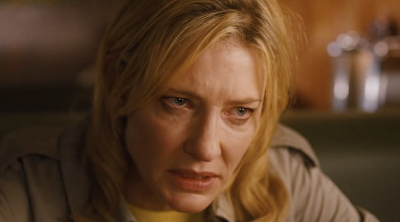 Woody Allen: the great chronicler of the white middle-upper class. There are exceptions to that rule - say, the era-hopping 'early, funny ones', the depression-based Purple Rose of Cairo or his recent European excursions (some sort of people, different continent). But a lion's share of his masterpieces are proudly concerned with the plight of the American middle class. This isn't meant in a necessarily disparaging way: while critics of the man have frequently pointed to his less than diverse filmography, the man has stuck with what he knows, with regularly peerless results. It's not like his films have been blindly celebratory, either. As much as he has frequently shown affection towards his characters, Allen is every bit as able to single out their hypocrisy, privileges, neuroses and naivety (of course, for Allen this is often an endearingly self-depreciating act of social & personality deconstruction). It would be nice to see Allen experiment, of course, but he has worked wonders in his niche, even if said niche was not exactly culturally or socially all-inclusive.

Issues of class and privilege are at the forefront of Blue Jasmine - perhaps to the most pronounced degree in Allen's incredibly long and prolific career. First impressions are clear (well, very first impressions are of Allen's trademark white-on-black credits and a shitty CGI airplane), and to a certain degree troubling: the writer/director is working with types and caricatures. Jasmine / Jeanatte (Cate Blanchett) symbolises the narcissistic, lazy, arrogant and condescending upper class. Her adopted, semi-estranged sister Ginger (Sally Hawkins) represents the good-natured but naive and unambitious working class. Their respective associates also conform to the somewhat stereotypical roles Allen subscribes them to. You'd be forgiven for thinking it's a simplistic dichotomy. Luckily, it's all part of a deeper, more intriguing game, as the film quickly looks to deconstruct and illuminate these simplistic class structures with youthful and unexpected vigour.

This is Allen's post-recessionary film, and it can come as a surprise to the degree he engages with this context, especially given his often perfunctory work ethic over the last several decades. It is far from the most Earth-shattering satire of capitalist society ever put on film, but Allen does force the audience to engage and question these familiar divisions. There's plenty of effort expended on developing what initially seem like simplistic stereotypes, and the result feels like Allen's freshest, most relevant film in decades.

Mostly, though, this is all about the characters, and it's a giddily cruel study of a variety of different people. As the title helpfully indicates, the focus is very much on Jasmine, brought to the fore through a powerhouse performance by Cate Blanchett. The biggest problem with Allen's newer films is the miserably stilted, unconvincing dialogue that has reliably defeated the vast majority of the genuine acting talent the director still manages to attract, film after film. Recent Woody Allen joints have absolutely wasted the best young and old talent Hollywood (and beyond) has to offer, so it's all the more impressive the Blanchett proves the most hypnotic screen presence Allen has possibly ever put centre stage.

Blanchett dominates the words, turning the dialogue into a caustic delight. It probably is the writer's best script in the longest time, but Blanchett never once fails to convince. There are still indicators of Allen's worst screenwriting tendencies here - most obvious when the usually reliable but here disappointingly stiff Peter Sarsgaard shows up as Jasmine's new suitor, complete with some seriously awkward sentences to utter - but Blanchett disguises most script shortcomings with breathtaking force. The best cinematic moments in the film, bar a few pleasant shots of San Francisco, are when cinematographer Javier Aguirresarobe puts her in extended close-up, ensuring there are no distractions between Blanchett's performance and the audience. It's not a particularly visually robust film, but it's a happy reminder of the timeless power of the close-up.

What a protagonist Jasmine is: rarely has such a despicable, unlikeable human being proven such a compelling screen presence. She's a person of profound selfishness - her efforts at empathy never lacking ulterior motives (although there are moments when she's acute and accurate in her observations). She is naturally charismatic, her mere presence credibly making certain men fall head over heels, until they see through her charade. She is, it should be said, a caricature - not exactly a believable human being, but more a distinctively cinematic creation. No matter: it's a wonderful creation. Like Charlize Theron's miserly anti-hero in Young Adult, Jasmine has no hope for redemption, and Allen makes the right move by having her end up in the same place she started in: lonely and talking to herself. It's invigorating to see such a hopeless character arc - even the grand third act revelation that Jasmine herself is to blame for her current economic woes and her husband's suicide is a delightfully harsh development.Woody Allen may be the king of the smart romantic comedy, but Blue Jasmine suggests that what he needed recently was to be proudly unromantic.

While Blanchett is unquestionably the film's beating heart, the rest of the ensemble also prove the most capable gang Allen has rounded up within recent memory. Hawkins is excellent as the timid Ginger, and Bobby Cannavale equally impressive as her husband-to-be Chili. The latter is a particularly good case of archetypes being challenged: despite initially coming across as the type of proud, macho Italian-American we've seen hundreds of times before, he slowly develops as a character of greater depth and intrigue. Allen resists simplistic 'good guy, bad guy' divides here, and his fictional creations are the better for it. Louis C.K. and Andrew Dice Clay also make a strong impression in their smaller roles.

There is still the unmistakably 'modern Woody Allen' waft of a rushed rough draft off Blue Jasmine at times - whether that's an underdeveloped subplot / character (Ginger's two kids are a particularly strange addition) or a cheap contrivance here or there (three or four important encounters feel far too conveniently timed). Nonetheless, it's an excellent rough draft. Particularly important is its beautifully realised structure - the narrative constantly and naturally jumping back and forth between Jasmine's 'high-life' with husband Alec Baldwin and her post-crash experiences living with Ginger. The characters might be the most compelling aspect of Blue Jasmine, but the intriguingly dramatic and enlightening narrative structure means these fascinating individuals are carefully placed in the story they deserve.
Posted by thecynicalgamer at 2:56 PM