This article is part of a year-long feature - watching and blogging about twenty acclaimed, cult, challenging and rare films over the course of 2013. The full list of films (and links to other completed posts) can be found here. Eighteen: Elim Klimov invites us to Come and See hell. 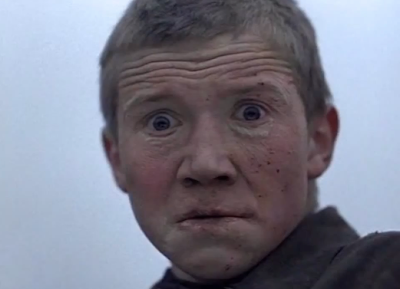 Forget arguments over whether Come and See is a great war film for a moment: it's perhaps most effective as a horror film. This is, in no uncertain terms, a descent straight into hell. The Belarussia portrayed by Klimov is a place of misery, violence and pure terror. Hope? What hope. It's relentless filmmaking that puts the audience through the wringer for almost two-and-a-half hours straight. There's few moments to breathe - a surreal, deluded excursion into a forest is the closest we get - but we're never far away from some act of destruction or death. It's as visceral and disturbing as any slasher movie: in fact, considerably more so because atrocities on the scale of the ones portrayed here did occur, not so long ago.

Aesthetically, Klimov's film is visceral and articulate, lensing the genocides and violent events as if they are a fever dream. We view it all (or most of it) through the eyes of young Flyora (Aleksei Kravchenko), and we're dragged with him through the nightmare he experiences after half volunteering, half being conscripted to join the underequipped, barely organised rebels. Creatively using Steadicam and other tracking, moving rigs, the camera is purposefully unsettled and confused throughout, which couldn't be more appropriate given the waves of disorientation Flyora is feeling. When we're shown his face in close-up, we see the weight of that emotional turmoil in uncomfortably intimate detail.

Occasionally, the camera even breaks rank and briefly lets us see something Flyora doesn't. It's a device used sparingly but devastatingly. The film's single-most memorable shot has Flyora's temporary female companion (played by Olga Mironova) glance backwards and, for only a couple of seconds, see something our protagonist doesn't: a stack of bodies, haphazardly hurled behind a small house. It's a gut-punch revelation that makes the desperate, hysterical sequences that follow even sadder, even more hopeless.

Come and See is a work of brute force. A bombing that initiates the film's most hypnotic, fevered fifteen minutes is without a doubt the most terrifying representation of explosives I've ever seen on film. Forget Michael Bay's expensive, stylised pyrotechnics. Here, a bombing is captured in all its forest-leveling capabilities: a disorientating assault of noise, dirt and destruction.

Then there's the film's most famed sequence: a prolonged village massacre, which is among the most harrowing, relentless setpieces in cinema history. It's brutal stuff: a group of German troops ride into town, and proceed to rape, pillage, burn and kill. It culminates in them locking more or less the entire population into a barn and burning them to death, laughing mercilessly as they push attempted escapees back in through the windows as the flames rise. All the while, Flyora - one of only a few granted a horrible sort of 'mercy' - looks on, by now in a crazed state of incomprehension and surrender.

Here's where I have something of a problem with Come and See, although it's a tricky one to describe. The film originated in a fiercely controlled Soviet Russia, and this lengthy village sequence is where I most worried the film veered towards propaganda. Now, atrocities on this scale did occur during World War II, no doubt about it, with soldiers effectively dehumanised in a terrifying sort of groupthink / hysteria. And, despite the fierce censorship the director surely faced, the partisans aren't blindly portrayed as great heroes either. But I was left wondering if Klimov's portrayal of German forces were simply designed to reopen old wounds and reignite decades-old hatreds. While it's near impossible to comprehend or underestimate the scale of World War 2's violence, there's just something overly cartoonish and simplistic about the way Come and See renders its climactic massacre. Indeed, a rumour alleges the working title was 'Kill Hitler', a name that brings to mind an unashamedly cartoonish war film - Inglorious Basterds.

A few penultimate scenes attempt to portray the Germans as individuals, but they're shown as little more than pitiful human beings. An experimental montage that sees Flyora open fire on a framed portrait of Hitler as archive footage of the dictator rapidly appears on screen jars stylistically with the rest of the film, and the attempt at some last minute grand thematic and moral context seems a bit confused (although the final juxtaposition of Flyora and a photo of an infant Adolf is a curious note of ambiguity and uncertainly, definitely more so than anything in Tarantino's fantastical finale). The emotions on display are understandable, and the real-life deeds of the German forces in Russia and elsewhere are in no way justifiable. But the tunnel vision means that Come and See ultimately fails to delve deeper into the human side of war, like some of the all-time great war films - La Grande Illusion, Thin Red Line etc...

Maybe, though, Come and See shouldn't be judged by the standards of those films. Even if the ideologies and messages are suspect, as a representation of hell on Earth its utterly visceral filmmaking, and certainly the terror of wartime has so ever been presented in such an unforgiving and brutal way. In its own way, then, Come and See rattles and disturbs the viewer more than any ghost story could. As a horror story, Come and See is pretty much unforgettable.
Posted by thecynicalgamer at 8:00 PM