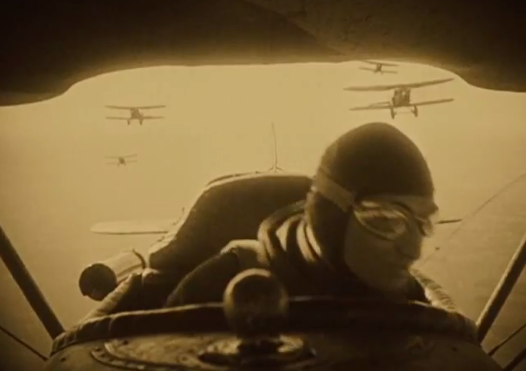 If you blame Steven Spielberg and George Lucas for instigating the scourge of the spectacle movie, you’re not alone. But Wings, fifty years older than Star Wars (and in some ways not entirely incomparable), is one definitive indicator that the idea was around long, long before the phenomenon of galaxies far, far away.

Spectacular is the word that springs frequently to mind when watching this film - despite nearing its 90th birthday, the scale and ambition of Wings can still take one’s breath away. It’s a film that in many ways seems even more impressive today - in an age of prevalent computer generated imagery and mobile cameras, what Wings achieves would humble the most accomplished special effects teams. Director William A. Wellman and his team went to mind-boggling lengths to capture the experience of World War 1 fighter pilots, from inventing specialised rigs to mount & stablise cameras on rickety planes to teaching its lead cast to fly for added authenticity (lead Buddy Rogers is said to have vomited after every landing).

The results speak for themselves. The dogfights and aerial sequences in Wings surely rank among the grandest technical achievements of early cinema. Giddily cutting between inventive camera angles (the cockpit view surely inspired the aforementioned Mr. Lucas), Wellman, his camera crew and stunt flyers managed to emulate both the electrifying rush and constant danger of WW1 aerial combat. Some shots border on vertigo inducing, while the director’s admirable obsession with waiting for only the most perfectly fluffy clouds before shooting pays serious dividends in terms of the epic aesthetics of these scenes. I’m not familiar enough with the reality of World War One flying to make a definitive statement, but Wings sure as hell feels authentic while also remaining deliriously cinematic in the way it captures the planes, whether that's a distant longshot of a formation or a visceral cockpit close-up.

On the ground too Wings is not shy of grand pageantry. The most obvious example is the climactic Battle of Saint-Mihiel. It’s a battle recreation on a dizzying scale, featuring thousands of extras, relentless gunfire, huge explosions and borrowed army vehicles: all while planes buzz overhead, perfectly cued to appear over a ridge at just the right moment. It’s a true feat of choreography: though it was undoubtedly chaos to shoot (involving almost twenty cameras rolling at the same time), it nonetheless edited together elegantly. Again, that famed beach storming in Saving Private Ryan has something of a precedent here

What about beyond the spectacle? Well, here again we find something of a precedent for the modern blockbuster, for better and worse. The characters and stories tying all the action together are straightforward and undemanding. There’s two distinct but interconnected halves - a tale of brotherhood, and a wartime love triangle (actually more of a square, even though the individuals involved aren’t aware of the fact). The former, focusing on the friendship that forms between one-time rivals Jack (Buddy Rogers) and David (Richard Arlen) is fairly standard stuff, truth be told, especially after nine decades of similar cinematic tales.

Filmed and produced largely by war veterans, Wings' portrayal of WW1 and the ‘heroes of the sky’ may strike many modern viewers as adopting a less nuanced, overly patriotic and even celebratory tone than the more removed, critical war films of subsequent decades. But it’s made with genuine heart, and to former pilot Wellman’s credit he does manage to fit in some poetic and even haunting imagery and sequences in there (a healthy 140 minute running time allows plenty of breathing space).

There is, for example, the sudden, even casual death of a soldier resting at the side of the road: a moment that packs more of a punch than the inevitably tragic fate of one our lead characters. Similarly, Gary Cooper shows up for a single scene as a veteran pilot who meets a premature end during a routine practice flight. These scenes leave a strong impression, more sombre notes in a film that often vies for the audience’s adrenaline rather than their brain. And even the airfights themselves aren’t lacking in some critical depth. The pilots’ deaths are unexpectedly bloody. There’s also the curious case of the German flying ace with a strong moral compass. On that note, the film largely resists the temptation to caricature or vilify the enemy forces, despite some patriotic undertones. Wings not be the most nuanced portrayal of war ever captured on celluloid, but it’s also far from toxic.

Then there’s the romantic element. Outside of It - the film that earned her her enduring nickname - Wings is the iconic Clara Bow’s most famed performance. And she is radiant, a boundlessly charismatic and lively screen presence who is almost the textbook definition of a silent movie star. It’s a bit regrettable that she’s shoehorned in, then, absent for massive chunks of the film and largely restricted to scenes that barely intersect with the main plot. This is most obvious during an extended sequence recounting Jack’s Paris furlough. A chance encounter inspires Bow’s character Mary to win the heart of her beloved next door neighbour (who has his heart set on another: the gal who is instead in love with David). Unfortunately, Jack is stupid drunk at the time. This leads to an overstretched gag where Jack imagines and chases after hallucinated bubbles - a strange choice that struggles to gel with the overall tone of the film, especially at such length. Bow’s presence makes this reel considerably more tolerable. Curiously - and provocatively for the time - she even has a topless scene here that provides a literally blink and you’ll miss it flash of flesh. It’s an unusual and unexpected moment, illustrating a sense of censorship baiting and audience teasing playfulness from Bow and Wellman.

While watching the new Masters of Cinema Blu-Ray release of the film, I was bewitched by a near immaculate transfer, easily among the finest early cinema restorations I’ve seen. I assumed that, as the first big winner at the Academy Awards, the film had been afforded some special preservation treatment over the years. Not so, it seems: a supplementary feature outlines the process as painstaking, the restoration team working from a damaged, low quality nitrate print. Paramount went above and beyond for this one, not only committing the time to make the image almost flawless, but also restoring the original tinting and even occasional handrawn colourisation, as outlined by the original release plan (which had thankfully survived).

Also welcome is a vibrant recording of the original live orchestral score by J.S. Zamecnik (there’s an additional soundtrack featured as well, if the bombast doesn’t appeal to you), and supplemented further by a sound effect track supervised by Ben Burtt. Before you yell blasphemy, large venues that originally showed Wings also incorporated many sound effects to further enhance the spectacle - after all, this film was released alongside the dawn of the talkie. All in all, it’s a glorious HD release, and an ideal way to appreciate the vibrancy and spectacle of the film.

If Wings falls shy of the sheer artistry of some of its contemporaries - after all, it was made around the same time as the likes of Sunrise: A Tale of Two Humans and The Passion of Joan of Arc - it does represent a unique pinnacle of early cinema. Its straightforward storytelling, technical invention and breathless spectacle ensure a rollicking good time. It’s a reminder of true, borderline reckless cinematic action, when the ingenuity, risk and effort behind the scenes impresses as much as the images themselves. With modern tools offering filmmakers boundless possibilities to realise their vision (just look at something like Gravity), Wings is a study in intensely physical moviemaking, the likes of which we’re not likely to see again.
Posted by thecynicalgamer at 4:35 PM