One of the problems anyone will face when attending a film festival is simply trying to take the time to reflect on the films as they rush from one cinema to the next. Sitting down and writing about them is another thing again, and I don't envy the professional critics who have to watch five or six films a day and quickly turn around high quality, coherent reports at the same time. But hey, they're paid for the privilege.

After a frantic five days of 'wake up, eat, bus, film, film, eat, film, film, bus, sleep', I haven't had time to write up much about this year's Jameson Dublin International Film Festival (thankfully Twitter and Letterboxd are mobile friendly for some brief and quick thoughts, if only for my own sake rather than fooling myself into thinking anyone's listening). So today, taking a 'break day' in the middle of the madness (not entirely voluntarily - I have to miss Mood Indigo due to other commitments anyway) I have some time to catch up on thoughts from the festival's first couple of days. I won't be able to give as much time to some films as I'd like, but that's a regrettable reality when trying to cover a dozen films in a very short space of time!

The underwhelming Calvary opened the fest. A minor improvement over director John Michael McDonagh's first film The Guard, it nonetheless fails to shake many of the problems that dragged that film down. Mostly it remains a tonal mishmash - broad, pantomime comedy clashing awkwardly with heavy handed themes and philosophising. There's too many characters - most underutilised and uninteresting, with an impression that McDonagh is just using any and every Irish personality that agreed to take part. In Aiden Gillen's appallingly misjudged performance as a doctor with a morbid sense of humour, we might have an early contender for this year's worst supporting actor. But the excellent Brendan Gleeson as a priest confronting a faithless, cynical society has an engaging arc, and occasionally the film is a curious and provocative deconstruction of a post-Catholic Ireland. Alas, the moments of insight are in relatively short supply, and ultimately Calvary is an intriguing character study in search of a coherent film.

The Militant (dir. Manolo Nieto) is another film propped up by its central character. In this case, that's Ariel (Felipe Dieste) - a Uruguayan student / activist who travels to his hometown following the death of his father. Navigating through characters and situations that illuminate a sort of social hypocrisy and apathy, Ariel becomes a more involved and independent individual as the film progresses. The film, to a fault perhaps, does possess the sort of sombre and at times clinical approach to the material that ensures it's almost inevitably destined to be relegated to festivals. But there's several poetic, evocative moments throughout the film, and Dieste's complex, enigmatic performance kept me interested.

Jim Jarmush's Only Lovers Left Alive is a blackly comic and expertly crafted antidote to the supernatural romances that have populated multiplexes over recent years. Tom Hiddleston and Tilda Swinton portray a vampiric couple (Adam and Eve) facing the challenges of maintaining a relationship and optimistic attitude while dealing with an immortal life and increasingly hopeless humanity. As strong as the two leads are (particularly Hiddleston), the fantastic Mia Wasikowska threatens to steal the show as Eve's wild sister, but Jarmush's deadpan tone and keen visual eye ensure everything is kept interesting. Particularly worth noting is the way Jarmush contrasts drinking blood with drug addiction - not a new idea in vampire fiction, but viscerally realised here. There's also an inspired use of music, including a tremendously disorientating opening shot that contrasts the stars (and credits) to a rotating record. Very funny at times, there is however something a little lightweight about Only Lovers Left Alive - the almost impossible to describe spark that differentiates a really good film from a great one. 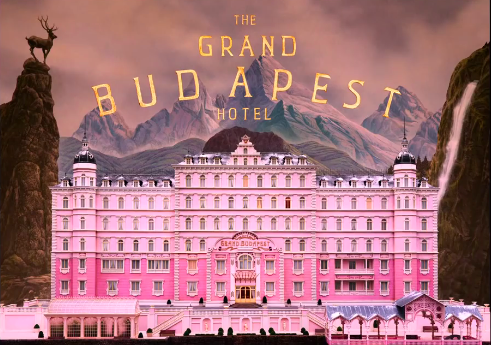 The Grand Budapest Hotel, however, has that spark in giddy abundance. It's perhaps not the film to tempt Wes Anderson detractors to the other side, but as a loyal subscriber to the man's idiosyncratic worldview this was a complete delight. Less explicitly 'diorama' like than his previous films (although the titular hotel resembles an elaborate doll's house), it still overflows with visual imagination: very few other contemporary directors could cause a genuine spinetingle through character symmetry or movement alone. The dominant 1:33 ratio is a perfect fit for Anderson's obsessively symmetrical eye as well as the 1930s setting, with different aspect ratios serving as a smart, elegant shorthand for the trio of different eras portrayed. In some ways it's a touch darker than we might expect from Anderson - there's more sudden, cartoonish violence than usual (including an unexpected finger injury) - but it's always a joy to watch, with the jokes coming thick, fast and hilariously. The plot itself is excitingly hyperactive, and a compelling misadventure on its own terms. Anderson also has a lot of fun staging setpieces that affectionately parody many familiar tropes and genre trappings - most notably an inspired jailbreak and a vividly realised chase than a ski slope.

It's more than just a quirky action-comedy, though, and Ralph Fiennes is a big part of that: playing a maître d'hôtel who is a wonderful mix of proper and crude, it's perhaps the single most brilliant performance in a Wes Anderson film since Jason Schwartzman as Max Fischer. Schwartzman is one of many Anderson mainstays who pop up in a series of delightful cameos - nearly all his collaborators appear at some point, with Anderson miraculously keeping control of what could easily have been total anarchy. But above all that there's a nostalgia and bittersweetness at Grand Budapest's core, explicitly articulated in the film's moving final minutes. Anderson's films have always been proudly artificial, but here he reflects on an era of history as a conflict between fact and fiction. The film's 'story within a story within a story' structure illustrates this most obviously: the Europe portrayed here is a result of second and third hand recollections, of a time and place most of us will be most intimately familiar with through cinema. Anderson concludes on the poignant reminder that, for all the energy and vibrancy of the world portrayed here, it is destined to remain an impossibly nostalgic dream. Luckily, we have Wes Anderson to visualise that impossible dream for us.

From the sublime to the insipid: Half of a Yellow Sun is a pitifully dull, pointless melodrama that wastes a dramatically potent and historically fascinating setting with a dull domestic / family drama. A capable cast futilely struggle against an inane script that offers no intelligence, themes or anything else of interest. With the look of a failed BBC drama pilot, the film shuffles along until it mercifully yet haphazardly ends. I've had underwhelming bags of crisps that packed more of an emotional impact.

Miss Violence (Alexandros Avranas) is a peculiar one. There's no question it's the product of contemporary Greek cinema: at times, it's incredibly visually and tonally derivative of Giorgos Lanthimos (there's even an odd shot that 'cuts off' the head off its characters that's effectively identical to a similar shot in Alps). It can also be hard to tell whether the film offers more shock for shock's sake - starting with an 11 year-old committing suicide, the film's plot goes on to encompass forced prostitution, pedophilia, incest, child abuse and other nastiness. But, these reservations acknowledged, there's still something strangely compelling about the film's creepiness and slowly unraveling horror show. As a blackly comic to the point of n portrait of a beyond dysfunctional family, it's memorable and metaphorically potent: given Greek's financial crisis, there's no shortage of things a viewer could read into what this film has to say about the country's current condition. It's bound to be divisive: not undeservedly and quite possibly intentionally. Even if it lacks a voice of its own at times, I found that it ultimately crept under my skin, perhaps in spite of itself.

That's enough for one post, so over the next 24 hours I'll hopefully get my Sunday and Monday reviews up - another varied bunch that ranges from the mediocre to the sublime (with two thankfully falling into the latter camp).
Posted by thecynicalgamer at 2:58 PM