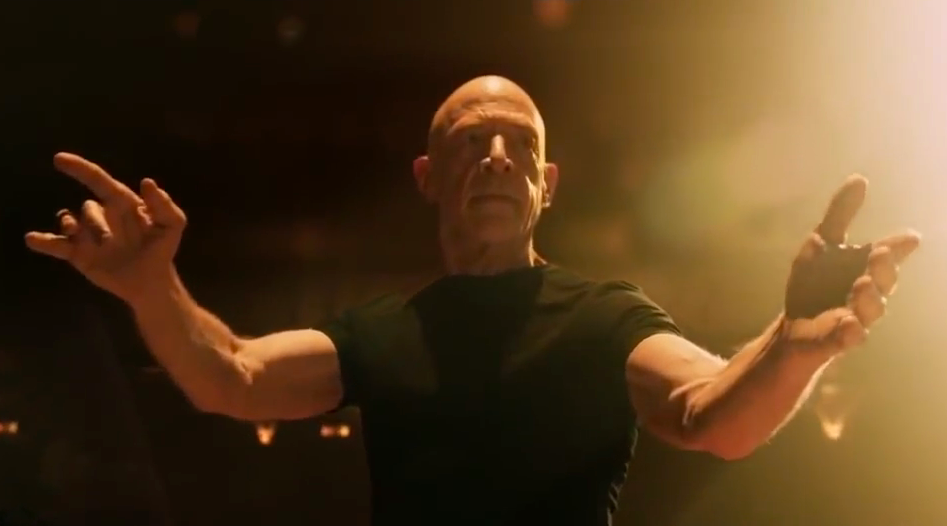 Whiplash is an almost classical cinematic two-hander. It boasts a whip smart script, a fondness for mid-twentieth-century jazz music and a variety of deliciously viscous put downs - in those respects, it is not entirely removed from the world of screwball comedy despite adopting tones and modes far removed from the textbook examples of that genre. But like all two-handers, it is the two hands that elevate Whiplash, and puts the central pair in the same ballpark as your Grants and Russells, Bogarts and Bacalls, Lemmons and Matthaus.

Like the latter example, there's nothing explicitly romantic or homoerotic about the chemistry between Miles Teller and JK Simmons here. But it is fucking electric nonetheless. A blend of exemplary performances and astute direction assures that every scene between the pair sizzles with excitement.

Teller plays young drummer Andrew Neiman, studying in a prestigious musical academy in New York - 'the best in the country', Andrew insists on informing anybody who will listen. Simmons plays Terence Fletcher, the school's most revered teacher and conductor. It isn't long before Neiman is accepted into Fletcher's elite class / band, and thus commences psychological warfare that ranks as 2014's most engrossing cinematic battle (with advance apologies to The Hobbit 3 and its battle-happy subtitle).

Neiman makes for a strong, offbeat protagonist. He is, to be frank, something of an asshole - a core trait that only becomes more pronounced as the film progresses (some only semi-successful attempts at third act redemption aside). His motivations are scarily believable, and the journey fascinating: he is driven to something not-far-off insanity by the need to be the best, and to impress his ever more demanding mentor.

Fletcher, brought to something larger than life by Simmons, is both a monster and a God. He is a character assassin extraordinaire, pushing his students physically and emotionally to breaking point and far beyond. He'll dangle a glimmer of hope and praise, and then tear them right back down again. A moment of kindness means a torrent of politically incorrect abuse is likely imminent (sample: "if you deliberately sabotage my band, I will fuck you like a pig. Oh my dear God - are you one of those single tear people? You are a worthless pancy-ass who is now weeping and slobbering all over my drumset like a nine year old girl!"). He is so confident, so cruelly charismatic and so demanding that we have no reason to disbelieve the hushed silence and complete subservience he commands in his classroom.

Yet thanks to writer/director Damien Chazalle's writing/directing, and Simmons' immense interpretation, Fletcher is more than a caricature. Through Neiman, we are granted fleeting but telling glimpses of the man behind the dictatorial music conductor. Neiman only sees these moments when he spies or intrudes on his teacher - they are at odds with the carefully constructed public performer, but flesh out the reasons behind his cruelty. There's an intriguing ambiguity to the character, too. A running subplot subtly explores his response to the suicide of a former student. Does he blame himself for the death? Has he deluded himself to the point where he denies his demanding working methods could cause deep-seated psychological trauma in his wards? Is he simply disappointed that a potentially great musician has expired before his time?

Ambiguity pervades throughout Whiplash. Inspired by Chazalle's own experiences in the cutthroat world of drumming, the film-maker proves resistant to directly condoning or condemning Fletcher's methods. He highlights both positives (particularly during a confident monologue by Fletcher in which he decries mediocrity, laziness and wasted potential) and drawbacks (a subplot about Neiman's disastrous attempt at dating happily expresses exactly with it needs to in a mere handful of scenes) to this sort of obsessive training regime. While everything is exaggerated for potent dramatic effect, to Chazalle's credit the film never hectors. Befitting this artful neutrality is cool Fincher-esque cinematography. There's a brutal, clinical efficiency to the look of the film, yet the camera casually captures everything from bloody drumsticks and scabby hands to sweat-soaked cymbals. The images are often evocative and intimate, but always retain a well-judged critical distance.

Whiplash is not without sin. Aspects of the plot are contrived, and Chazalle conjures up one of cinema's most deplorable black magic tricks - a scene where a vehicle is hit by another, 'stealth' vehicle at a crossroads. This stunt has long since graduated from irritant to nuisance, and as memorable and pivotal as the scenes that follow the crash are - an injured, bleeding Neiman feebly attempting to perform at a crucial competition - this is a case of the ends not justifying the means.

The end, though... Whiplash builds to a final sequence of tremendous power and catharsis.  Music is, of course, extremely prominent throughout the film - see it in a cinema to really feel those pounding drums - but Chazalle is brave enough to dedicate the entire finale to a musical performance that doubles as a culmination of the conflicts and tensions of the film. The cinematographer (Sharone Meir) and editor (Tom Cross) give it their all - including a visceral, inventive panning shot that lives up to the film's title. Everything sets up a frame-perfect cut to black.

In an act of extreme cruelty, Fletcher opts to exact revenge on Neiman for selling him up the river by humiliating him in front of an audience (a fascinating alternate reading could suggest that this is all part of Fletcher's plan to push Neiman to be a truly great drummer). However, Neiman opts to turn the tables on Fletcher in the most devastating way possible - by delivering the best fucking performance he can.

Again, all this is done with a bare minimum of dialogue, and it's all the more captivating for it. When the sequence really starts to sing (figuratively speaking) is when the pair come to an understanding to work together and deliver one hell of a drum solo. Suddenly the hate, the frustration, the deception, the mental and physical torture become meaningless as Neiman and Fletcher achieve a moment of mutual transcendence. The audience in the theatre and even the other musicians are relegated to the periphery - it's all about these two people, and their intoxicating spiritual and emotional connection in that moment. You know, maybe it's love after all.
Posted by thecynicalgamer at 2:21 AM