A film worth talking about 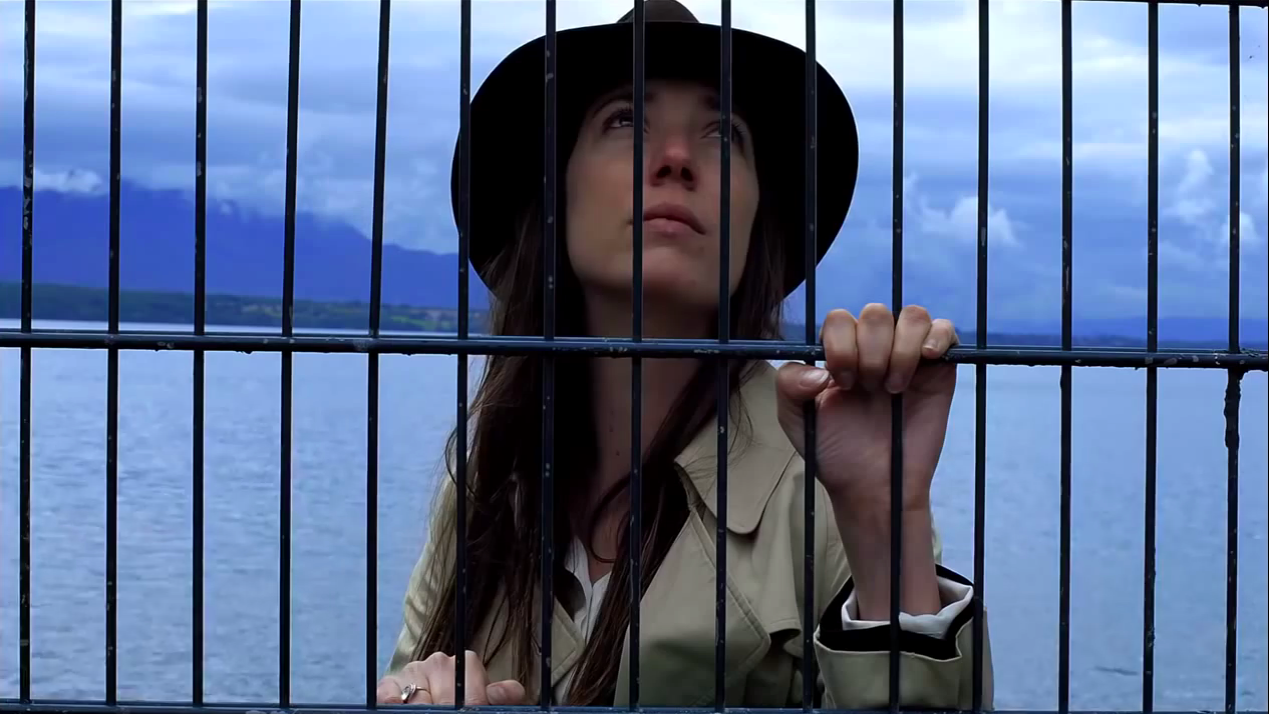 Jean-Luc Godard has always broken the rules, and in Goodbye to Language's most bravura sequences he breaks 3D. In a pair of scenes that have already justified much acclaim - and a reported mid-film round of applause at Cannes - he ignores the fundamental idea that stereoscopy uses two offset images to create the illusion of one, layered image for the viewer. This is partially achieved by having two cameras, side by side, shoot the same scene. Godard instead chooses to separate the cameras and have them follow two different actions. The audience then sees to different images, separate yet connected. Cover one eye, and you'll see one 2D image. Cover the other eye, you'll see another image. Both eyes open, you see both simultaneously. It's a mind-bending sight - an imaginative way of using aesthetics to tell a story, especially in a film as obsessed with duality and (a)symmetry as this one is. If you want to understand how 3D works, these two shots are an enlightening crash course.

This act of daring works in Godard - his films are as much essays on cinema, deconstructions of form and active works of criticism as anything else. But this act of 'breaking' 3D in such an invigorating way can only happen in a film as self-aware as this is, as keen it is to explicitly draw the audience's attention to the limits and the possibilities of a three-dimensional image. In another film, it would be heinously distracting, shattering a carefully constructed immersion. In Adieu au langage, it is brilliant. This is the definitive 3D film, and one that pushes the technology's aesthetic potential in a variety of startling ways. But it is so in a way pretty much impossible to replicate in anything other than an 'art film' or an incredibly brave experiment. On one hand, we have an exciting new frontier for 3D cinematography. On the other, we have a punctuation mark, a farewell,  a firm reminder of the limits of the technology.


You can almost hear Godard - who remains the finest of cinematic trolls (I mean that in the nicest way) - cackling when the realisation dawns that these boldly three-dimensional images are not suitable for widespread emulation. The fuzzy, restless look created by the handheld lo-fi cameras in certain sections of the film emphasises the 3D, but would be unavailable to a Hollywood cinematographer (even 'found footage' films often use higher definition cameras than is strictly speaking appropriate). Godard's penchant for placing objects - typically NOT the key subject, action or focus of the scene - in the foreground articulates depth in a very clear way, but again most cinematographers would not get away with emphasising a bollard over a ship. It has self-referential visual gags - most notably the letters '3D' hovering above the letters '2D' in one of the film's many text cutaways (this is late Godard, one will always remember) - that can only exist in a film that is so proudly self-referential.

Goodbye to Language's use of 3D is restless, aggressive and even hostile - constantly drawing attention to itself, and demanding the audience recognise and observe the artificiality of the images. Yet it also emphasises depths and image layers in a way that shames the 'best' 3D cinematography e.g. Life of Pi. GTL remains starkly, obviously 3D from beginning to end, whereas in most other efforts one's eyes acclimatise and the 3D effect is effectively redundant well before the credits roll, despite the best efforts of the camera team. This is the 3D film, and while it perhaps offers some degree of hope to those of us with no love for the technology (and indeed those who do), the delightful irony is that almost everything that makes Goodbye to Language's 3D stand out (in the literal sense) is what barely anybody will be able to adapt or build on for themselves. 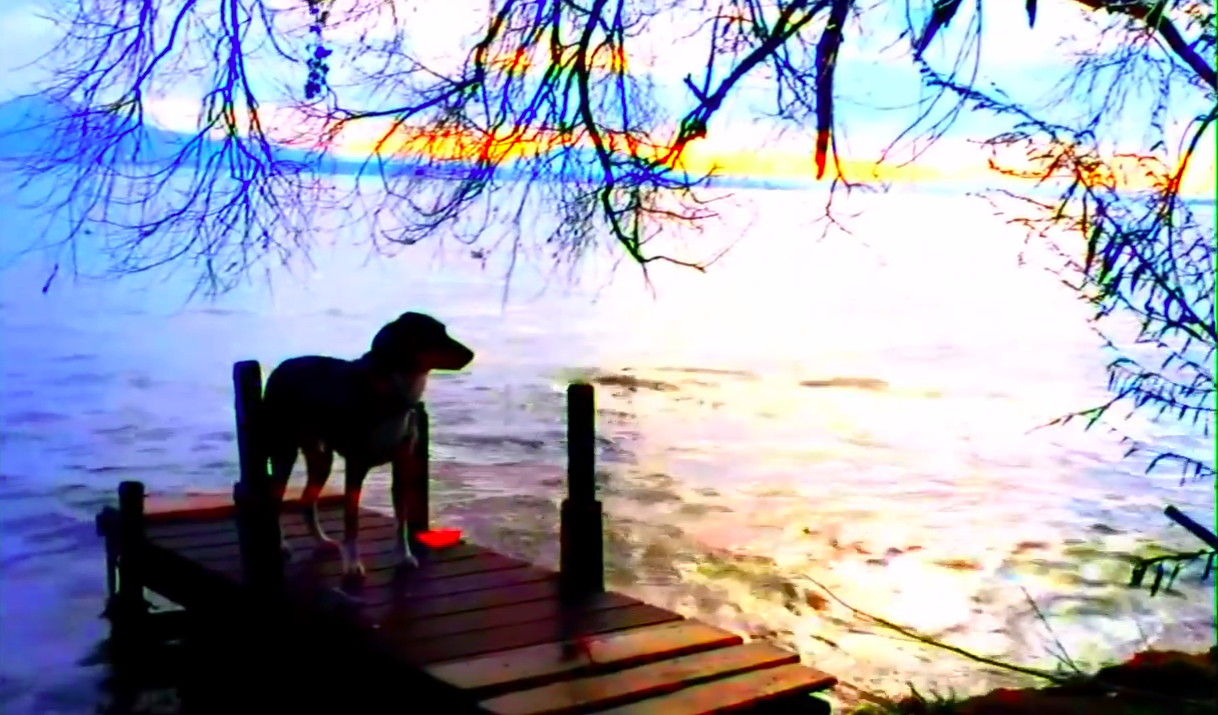 I am surely not alone when I say, depending on my mood and the film in question, I have found several of Godard's films alienating, cold-hearted, perversely difficult and occasionally illustrating true disdain towards the audience. That is very often the exact point, naturally, and in the same film in a different day these characteristics could be perceived as positives. Nonetheless, Godard is frequently a director who dares and invites you to hate his films. Yet what is also obvious in many of his films - I'm thinking Weekend, my personal favourite in his oeuvre - is a wicked sense of playfulness.

This can manifest itself formally, through a spirited refusal to conform to norms. The use of 3D here is a perfect example. Godard is also keep to cheekily mess around with sound design. In Goodbye to Language, dialogue is often disconnected from the images on screen. Music splutters to life and then suddenly stops - never with the timing we have been programmed to accept. This is the rare film that uses surround sound in an inventive way - Godard chooses individual speakers to isolate individual sounds, or to create truly multi-layered soundscapes. Much of this serves thematic or narrative purpose, but on occasion it's clearly just Godard having a laugh, sometimes at the audience's expense (it is physically and mentally disorientating, sometimes exhausting). Other times, his playfulness is more overt - two scenes here take place when characters are taking a shit, with accompanying sound effects that would not seem out of place in a Farrelly Brothers setpiece. From socialist proselytising to toilet humour - such a sharp dichotomy could only exist in the work of a joker.

Goodbye to Language 3D is fractured and elusive in a manner far beyond other recent examples of 'challenging' film. The likes of Upstream Color, The Strange Color of Your Body's Tears and Post Tenebras Lux are reticent to concede all their secrets on first viewing to all but the most attentive viewers, but Godard operates on a more complex level entirely. A first viewing of Goodbye to Language will most likely reveal only some tenuous, maybe subconscious hints and links to the big picture. There's moments of subtle repetition, and copious references - visual, aural, spoken - to duality. The film embarks on tangents, but typically ends up back with one of two couples (through cheeky casting and camera angles that often exclude faces, Godard even makes it challenging to identify which couple is which). Much of the film focuses on a dog, seemingly a linking factor between many scenes and themes. There is a barrage of literary & cinematic allusions - here's a list, still in progress - surreal asides and political / sociological musings / ramblings. The 'farewell to language' indicated in the title is explored in an characteristically strange, multifaceted, contrary way. To be perfectly honest, I feel ill-equipped to even attempt a reading of the film's themes and narrative based on a single viewing. Right now, I am not going to try.

Goodbye to Language is baffling, then, but it's baffling in a way that had me googling almost immediately in an attempt to get to grips with what I just watched. Happily, I was greeted by quite a number of informed, intellectually engaged critiques of the film, the charge undoubtedly led by David Bordwell's exemplary interpretative efforts. Even in the often dry Variety, Justin Chang offered some lively, enthused comment within an article on the film's distribution woes.

When mainstream film criticism is drifting in ever shallower directions - dictated, of course, by mainstream cinema itself moving in ever shallower directions - here were a selection of gushing, excited essays from cinephiles excitedly trying to come to work their way through a fascinating and difficult film. While watching and rewatching the film in an attempt to articulate their own response, their observations and readings can also inform and enhance their readers' thoughts, who then might have additional insights - perhaps even some dissent, which is just as important - to add to the discourse. Frankly, I wanted to rush to watch the film again after reading some of the fascinating responses, although sadly I must wait until a proper commercial release here.

This film, then, isn't just worth watching, although it's definitely that, and it's worth watching multiple times: it's a vital effort from a veteran director operating with youthful creative vigour, and demands a theatrical viewing or at least one in a damn good home theatre. Beyond all that, and after the abridged credits roll, Goodbye to Language 3D is a film worth talking about. That title, laced with intellectual curiosity and irony though it may be, is amusingly fitting for a film that demands and encourages such lively discourse.

Godard famously started as a print critic, and like almost all his work the film itself is an act of criticism. And that act of criticism has provoked intellectually engaged and provocative criticism of its own. For many people who love talking about, reading about and writing about film, then, Goodbye to Language 3D is likely to prove a gift that keeps on giving - and not just because it demands three, four, five viewings to start to even partially comprehend the damn thing.

When's that wide release again?
Posted by thecynicalgamer at 4:45 PM