Review: The Chef of South Polar 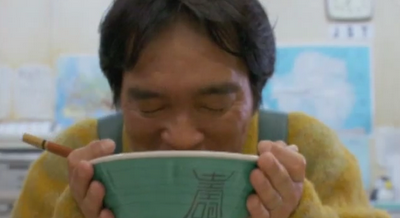 Unlike others I've spoken to over the years, there's not many 'genre' films I'll be instantly enamored with for merely belonging to said genre and being bascially cinematically competent. There is however, an underpopulated sub-genre whose existence fills me with great joy. Thus far, I had only discovered one film I would have categorised in the glorious realm of Japanese Food Pornography, and that was the scrumptious and deliciously eccentric Tampopo. But now I have hungrily stumbled upon another: The Chef of South Polar.

Salmon sashimi, pork Ramen, 'fried' lobster, miso soup, flame-grilled steaks, roe-filled rice balls, tempura, foie gras: these are amongst the giddy treats that will have any lover of Asian food salivating throughout this film. But it's not all about food: the film also comically follows the misadventures of seven Japanese men holed up for over a year in an Antarctic Research Centre. As the title and obsession with food may have already suggested, the focus is squarely on the chef amongst the group, Nishimura (Masato Sakai), a real-life polar chef whose experiences and book inspired the movie. As he tries his darndest to prepare delicious meals from the long-frozen supplies, the others struggle to entertain themselves in the isolated environment. And it isn't long before the old snow madness sets in...

Director Shuichi Okita has a keen comedic eye, and the relatively structureless film moves along amiably with a steady stream of surreal, goofy and warm-hearted comedy set-pieces. As the mens' beards' grow longer, it's harder to separate one from another, but most are blessed with subtle character motivations and backgrounds. They also all enjoy their own comedic moment in the sun (or lack thereof, during the claustrophobic Polar night scenes). From a Ramen dependent Chief, to a doctor fond of midnight sub-zero cycles in his underwear, these are a colourful bunch to spend time with. A meal involving the previously mentioned fried lobster is priceless stuff. It's refreshing to see such an innocent, charming comedy succeed so regularly.

The film undergoes somewhat of a tonal shift in the latter half of the two hour plus running time. The researchers inevitably begin to experience some paranoia as a result of their isolation. Darker themes pervade during these sequences, if never quite fully abandoning the generally jovial atmosphere of the movie. Nevertheless, Okita frequently references the unnaturalness of the situation these guys find themselves (it's not too much of a stretch to draw some parallels to the recent Russian 'space-shuttle in the car park' isolation experiment). The backstories and actions of the characters are surprising and engaging.

If there's a flaw, it's that it all goes on a little too long. In the final twenty minutes or so, there are countless moments where it seems as if we're going to fade to black. There are some magnificent shots courtesy of cinematographer Akiko Ashizawa, but false endings repeatedly lead to not entirely necessary follow-ups.

It's a small concern in what is otherwise an energetic and very funny film. The story and character arcs are loose and subtle, but due to the charm of the situations presented means you'll barely notice. Just be wary of hidden costs: you'll emerge hungry, and everyone knows its tricky to get good quality sashimi outside Nippon and the South Pole.
Posted by thecynicalgamer at 8:09 PM