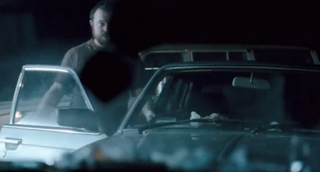 If recent cinematic exports from the country are anything to go by, Australia is a horrible place to live. Every major Aussie release I've seen over the last year or so has been a parade of violence, dingy environments and social collapse. Samson & Delilah was poetic but unflinchingly grimy. Animal Kingdom was a vibrant but violent slice of urban decay. Beautiful Kate was rural grimness redefined. Only the The Tree didn't seem to wallow in the filth, and that suffered from the affliction of not being a terribly good film in the first place. Snowtown is another film that fails to do the Australian Tourist Board any favours.

The major differentiator between Snowtown and the other examples is that this is based on true events, so this time this is honest-to-goodness true-to-life grimness rather than a fictionalised one. The disturbing story of serial killer John Bunting (portrayed terrifyingly here by Daniel Henshall) has been well covered elsewhere, and of course is the driving force of the film itself, so I won't dwell on it. But in general terms, the film tells its tale through the perspective of young Jamie Vlassakis (Lucas Pittaway). After he and his brothers fall victim to a pedophile neighbour, their mother Louise (Elizabeth Harvey) takes up with Mr. Bunting, who scares the neighbour into moving away. Soon, John's group of friends are holding hate meetings in the Vlassakis home, where they vent and plan acts of revenge against people they perceive as having committed crimes against 'respectable' society. It isn't long before John's vengeful tendencies turn increasingly violent.

Snowtown is a film that dares you to endure it. Through a mix of a fractured narrative structure, dank cinematography (courtesy of Adam Arkapaw, who is well versed in Aussie griminess after his work on Animal Kingdom) and a consistent sense of dread, director Justin Kurzel has created a very, very tough watch. It isn't all that explicitly violent - there is one graphic killing that will have you squirming as it drags uncomfortably on and on - but it's most certainly disturbing, and even the most hardened viewer will find it a deeply unpleasant experience.

Whether this is a good or bad thing is a question I struggle to answer. It's most certainly a fascinating film. Punctuated by irregular but hypnotic stylistic interludes, it consistently reaches new heights of visualising a dark, rundown and anonymous urban mid-90s Australia (kudos to the art department for some nice period flourishes, like a crushed MegaDrive box). The casualness with which the filmmakers present major, and often unsettling, narrative revelations frequently shock and surprise. It's the casual disregard the killers have for their victims that makes them particularly horrific individuals. The performances from a largely amateur cast are more than serviceable, but it's Henshall who dominates throughout. Comparisons to an equally psychotic Ben Mendelsohn in Animal Kingdom are justified, but Henshall brings Bunting to terrifyingly unique life. This is a serial killer movie where the manic confidence and self-justification of the antagonist makes for an utterly deplorable villain, whose scarily realistic motivations are disturbingly visualised throughout. He is a man who will kill even close friends if he perceives them to have wronged him or wider society. It's the increasingly ambiguous interpretation of these wrongs that leads to an ever escalating body count.

Yet a major flaw of the film is that few of the characters are in any way easy to relate to. Jamie is designed as a blank slate of sorts, so it's hard to emote with him as his absent patriarch is replaced by Bunting. The supporting characters are similarly shallow, with even the likes of his mother sent to the sidelines as Bunting dominates centre stage. The lack of characterisation means the killings further lack emotional resonance, and the disjointed narrative makes it even harder to separate one character from another. On one hand, this could be considered a strength as it lends the film a cold, removed sterility. On the other, it makes it even harder for the audience to view the film from anything other than an utterly removed perspective.

I can't help but draw comparisons to Shane Meadows' This is England - both stories of inexperienced young lads caught up in a hyperviolent world certainly share similarities. But where Meadows created individuals full of character and energy, Kurzel settles on an icy precision that stays unflinchingly loyal to the titular township's name. And there's a distinct attempt to create an almost documentary feel here - you can't always alter the truth, after all. But where Sion Sono toyed with non-fiction to colourful effect in this year's brilliantly eccentric Cold Fish, Snowtown is a film whose sterility makes it one of cinema's most gruelling recent endurance fests. Yet, once again, it's hard to tell whether that's a good or a bad thing - in many ways, it's almost as if the distinct unwatchability is the whole point.

Posted by thecynicalgamer at 8:05 PM