The Runway / A Film With Me In It 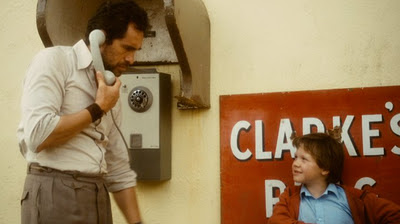 This article originally appeared on www.bone-idle.ie. Give them hits, y'all!

Here we have two films that share a few things in common. Firstly: they’re both Irish. Secondly, and this is related to the first point: they’re Irish films that try something somewhat different than your typical grim urban / rural social dramas, which is admirable. Thirdly: they both feature distractingly weird performances from Mark Doherty. Fourthly: they're both directed by chaps called Ian. Fifthly, and finally: neither is particularly good.

Let’s start with The Runway. It’s written and directed by Ian Power, and (as the box art informs us) is kind of based on a true story. Our hero is young Paco (Jamie Kierans), who stumbled across a plane crash outside his small village in Co. Cork. The pilot is Ernesto (Demián Bichir): a Colombian pilot without a word of English. Soon discovered by the mostly unemployed villagers, the locals resolve to fix the plane and send Ernesto on his way. Nothing’s ever that easy, though, is it?

The Runway often appears to be an uplifting family drama, but isn’t entirely successful. A significant flaw is that it doesn’t quite seem to know what audience it’s aiming for. The themes and ideas are often too complex for kids and too simplistic for adults. There are a few strange decisions: a number of Traveller characters are always subtitled when they speak, to pick one distracting example. The biggest problem is that it largely lacks dramatic momentum. Everything just kind of happens, and attempts at heightening the drama feel misguided. Attempts to flesh out Ernesto’s back-story are particularly laborious.

A few things save it from outright failure. Irish cinematographer P.J. Dillon helps makes it look very cinematic despite a typically modest budget. The special effects are shoddy, but mostly the images are compelling. Although the film is set in the 1980s, there are a number of ideas that effortlessly resonate with the current Irish economic situation. And there is a nostalgic charm that always threatens to woo the audience, but never quite does. There are the makings of a good film in here. It just falls short of really taking off. 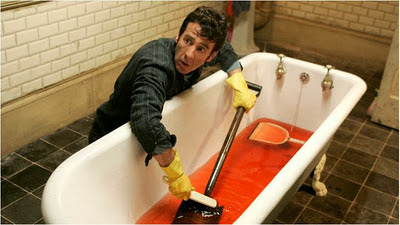 A Film With Me In It is altogether less successful, not least because of the increased presence of Mr. Doherty. A supporting character in The Runway, here he’s promoted to starring role as the mumbling Mark. His performance is just too weird and distant, and personally I couldn’t have cared less about his character. Alongside him is Dylan Moran as Mark’s drunken friend Pierce. Moran plays the exact same pseudo-intellectual drunk he played to a tee in Black Books. Rounding up Mark’s group of eccentric acquaintances are Amy Huberman as his long-suffering girlfriend, David O’Doherty as his silent, wheelchair-bound brother, and Keith Allen as his sleazy landlord.

Things start off relatively promisingly. Mostly set in a dank boarding house in the Dublin suburbs, the opening scenes suggest a darkly comic and very Irish riff on something like Final Destination. Director Ian Fitzgibbon taunts us with suggestions that everything in the house is a potential death-trap – everything from a guillotine-like window to an over-sharp clarinet stand. As Mark’s life begins to collapse around him, we wait with baited breath for the deathly Rube Goldberg devices to play out their complicated machinations.

Alas, when the body count finally begins to rise, it does so anti-climactically. There are few surprises – everything plays out exactly like the Fitzgibbon teased. There’s no tension like the best of the Final Destination death-machines: do not expect the unexpected. And it’s not particularly funny either. Add the profoundly unlikable characters to this, and one has to wonder what the point is as Pierce and Mark find themselves with a house full of bodies. Attempts at some sort of meta-commentary on the filmmaking process fall very short indeed. The plot is spectacularly contrived, and it all leads to an extremely unconvincing conclusion.

On one hand, we should probably applaud Power and Fitzgibbon for trying something different within the restrictive confines of the Irish film industry. Yet it’s the fact that the basic concepts of the two films are so interesting and rife with potential that their ultimate failures are so disappointing.
Posted by thecynicalgamer at 9:48 PM

Email ThisBlogThis!Share to TwitterShare to FacebookShare to Pinterest
Labels: a film with me in it, double feature, dylan moran, irish cinema, mark doherty, review, the runway