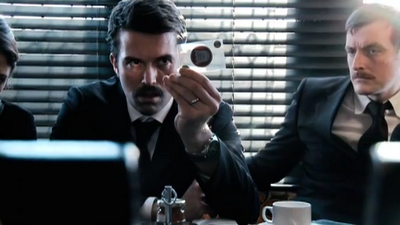 Charlie Casanova is a rant, a call-to-arms, an agenda and a sermon. It's barely a film - it's a stream of consciousness. There's the old saying in film-making that you should never tell the audience something when you can show them it instead. First-time director Terry McMahon, frankly, doesn't give a fuck.


The plot here is inconsequential. It's basically a two-man show: Emmett Scanlan as Charlie Casanova (nee Barnham), and McMahon (who crafted this passion project after years spent peddling self-proclaimed crap in the notoriously bleak Irish film and TV industry) as the rabid driving-force behind the camera. Charlie is an upper middle class guy fond of putting down the disenfranchised working class and, almost like Two-Face in Batman, allowing a deck of playing cards to determine his and others' fate. When he accidentally hits one of his despised 'hoodies' with his car, he runs. But that event is ultimately just a catalyst for a descent into a murderous psychosis.

There's no denying antihero Charlie is a force of nature. He's a thoroughly despicable human being, and Scanlan captures manic energy behind him almost too well. You can barely keep track as he embarks on absurdly wordy rants about the sorry state of 'lower' society. He is a man with a terrifying sense of entitlement, and the scariest thing is that there are genuinely people like him out there. Not to this extreme, but damn close. There's no attempt to contextualise him - he's simply a beyond arrogant asshole; no backstory required. Anyone who has ever seen charismatic, honest-to-a-fault writer/director McMahon speak can certainly see how he has crafted such a deplorable yet hypnotic fictional personality. Charlie as a character, however, belongs in a better film.

While Mr. Casanova is most definitely a force to be reckoned with, the film thinks that's enough to get by. He's allowed to rabidly rant so frequently - and at such lengths - that it becomes exhausting. It's one anti working-class tirade after another. To say it lacks subtlety is a serious understatement. Impossible to empathise with, he becomes McMahon's representation for everything that's wrong with society. And he repeats the messages again and again and again.

As a result, narrative seems like a careless afterthought. Everything that happens is inconsequential or at worst nonsensical. Sure, there are some story developments, but they fail to give this structureless & paceless film any momentum. Stuff happens and is swiftly ignored, leaving numerous lingering plot strands by film's end. There are subplots and side characters, but they're uninteresting. All the female characters are very purposefully written as mere objects in an exaggerated parody of a man's world - this makes perfect sense from the twisted perspective of the misogynistic protagonist, but further fails to provide the audience with anyone we can root for. There are actually some intensely delivered scenes here - a failed Garda interrogation (with a distractingly illogical conclusion), a disturbing comic routine or a lengthy one-shot conversation that ends with a genuinely surprising punctuation mark. But these are diamonds in the rough: rare highs amongst a sea of noise. The rest of the film is exhausting: by design, of course, but it's a design that's there to make the audience suffer, to challenge them to endure this thoroughly unlovable film. Terry McMahon has basically made a feature length 'fuck you'.

Technical failings aren't fair to criticise here - for all the complaints above, the fact that this was produced for less than a grand is a remarkable achievement for McMahon. And say what you will about the production - and I've said lots about it in the above paragraphs - but the whole project oozes a genuine anger and unflinching passion that makes it a very easy movie to admire. What Charlie Casanova isn't is an easy film to like, and that's because it's not a film at all: it's a videoed rant in search of a film.

Posted by thecynicalgamer at 12:24 AM