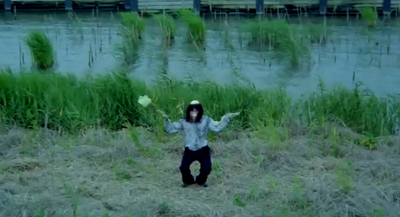 
The main narrative thrust (yes, I had to use that word) of the film is as follows. Asuka (Sawa Masaki) is a worker in a fish factory, engaged to be married to her boss. But one day her first love returns from the dead in the form of a Kappa. A textual prologue informs us that a Kappa is a turtle-like sea creature that enjoys challenging people to sumo matches. Anyway, Asuka is led on a coming(in more than one way)-of-age story as she learns to move forward by confronting her unresolved past. There's also a very unusual suppository MacGuffin for various fantastical reasons. And people have sex along the way.

In Underwater Love's case, the sex is little more than an afterthought, and it's ultimately to the films credit. Even when above waist nudity is required, things are kept brief. If anything, they're pretty dull in comparison to the multicoloured energy of the rest of the film. Japanese censorship laws are quite strict when it comes to nudity, so director Shinji Imaoka - a veteran of this sort of thing - has a few playful tricks up his sleeve to bypass them. There's at one surreal sex scene that will provide surprised laughs.

Making things even weirder is the involvement of Christopher Doyle, the talented cinematographer responsible for most of Wong-Kar Wai's films. The result is a film that looks fantastic: the colours are vibrant, the visuals razor sharp and even a few moments of stylistic temporal and technical distortion for good measure. And then there's the music. Courtesy of German band Stereo Total, the musical numbers are irreverent, nonsensical and loosely choreographed (sometimes the actors don't even bother lip synching). The songs are actually pretty catchy, especially a fish factory ode to grandparents (makes no sense in context). Oddly, this all works, and the music is a pleasant diversion in an already tightly paced film - at under ninety minutes, this is actually comparatively epic in 'pink' terms where running times tend to knock around the sixty minute mark to allow for theatrical triple bills.

Fantasy, music, sex, comedy, Christopher Doyle: tying all these ill-fitting elements together is a light-hearted but ultimately charming story. It's a romance with an unusual ending, and a character study that celebrates the simple joys of life and independence (it could also be read as a playful satire of marital and long-term commitment). Don't go expecting a hugely complicated narrative, but it should ultimately win you over through eccentricity. A genuine sense of fun makes Underwater Love a film worth watching through to the end. And thanks to the OST being included with the DVD, I'll have Fish Factory stuck in my head for weeks :/
Posted by thecynicalgamer at 10:07 PM