Silence is a virtue 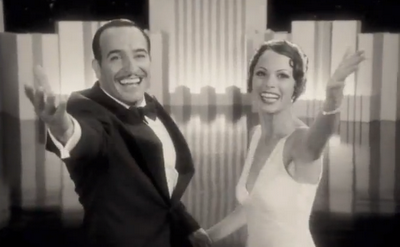 Silent cinema is the artform that died too soon. Having watched a number of the classic silents over the last year or so - including Metropolis, Battleship Potemkin and the glorious Sunrise - I've been amazed at how well they've held up. In the absence of sound, film-makers were forced to tell their stories in a whole new way, while revolutionising their chosen medium in the process. Indeed, many of today's film-makers could still learn a thing or two about pacing and editing from Eistenstein. But, alas, along came sound and killed both the artform and its stars. A very small amount of exceptions aside, silent cinema was all but murdered. While no-one could every begrudge how sound liberated cinema, it's always fascinating to think what the great silent directors would have achieved if they had another decade or two to hone their craft.


TL; DR? Silent cinema is great. So it's with excitement I went along to see The Artist:
Michel Hazanavicius' silent homage currently enjoying rave reviews from pretty much everyone who writes about cinema. To the film's credit, it narratively acknowledges the history of Hollywood cinema. The story follows George Valentin (Jean Dujardin), a silent star who takes wannabe Peppy Miller (Berenice Bejo) under his wing. However, the invention of sound disrupts George's stardom, at the same time as it propels one-time extra Peppy towards the big time. George starts a slow descent towards obscurity and bankruptcy. But will Peppy save her one time mentor?

It's hard to deny that The Artist has charm to spare. It's energetic, confidently directed and surprisingly funny. The classical Hollywood style and settings are bang-on, while the actors - from Dujardin's fantastic central performance to minor roles from the likes of John Goodman - do wonders with only their facial expressions and body language to see them through. Cinephiles will have fun spotting the references - from the obvious (scenes from Fairbank's Mark of Zorro are lifted straight, and George Valentin isn't too far removed from Rudolph Valentino) to the subtle (some surely so subtle I'm not even going to pretend I spotted them!). There's also a few pleasant and inventive sound subversions, but to say more would be in spoiler territory - although one that's similar in tone and execution to the nightmare sequence in Wild Strawberries is particularly memorable, while the last minute of the film contains a clever surprise that helps make sense of Valentin's plight. Overall the movie is romantic, pleasantly nostalgic and great fun.

It's also hollow and crowdpleasing to a fault. Watching The Artist, I was constantly reminded of Sunset Boulevard - a film from six decades ago that handles the exact same themes as The Artist with much more insight, darkness and scathing wit. The Artist - excusing the obvious pun - is devoid of a voice of its own. This is a revisionist celebration of silent cinema. The crowd-pleasing 'happy ending' shows up everything that is wrong with the film - the stars Valentin is based on didn't have a happy ending, and it feels cheap to ignore this in favour of a crowdpleasing musical finale. Everytime you think the film might bite hard, the film-makers ensure it's followed by a dog doing a terribly cute trick so the audience doesn't feel too down. It's not surprising to see the Weinstein name plastered all over the credits: The Artist is the kind of inoffensive Oscar bait they specialise in. Few critics or Academy members would dare criticise a silent, black & white film that visually homages Citizen Kane: expect The Artist to waltz away with Best Picture, no questions asked.

I actually kind of feel bad for the cynicism in that last paragraph, even if it is a film that seems cynically designed at times. Because, despite my serious issues with The Artist, I still thought it was a thoroughly enjoyable film - one of the most fun in quite some time, dare I suggest. Even in its weaker moments (such as a few ill-judged dream and hallucination sequences) it is a dashing, charming bastard. It's just that there's something missing. It lacks a compelling reason to exist as anything other than a shallow exercise in nostalgia. Nonetheless, it's still a pleasant novelty to see an Academy ratio, silent film on the big screen, even if you kind of wish it was Sunset Boulevard instead.
Posted by thecynicalgamer at 12:49 AM