They see me trollin'. They hatin'. 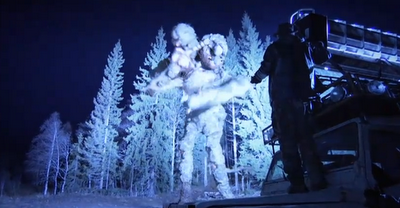 What a difference a decade can make. Blair Witch Project wasn't the first found footage film, and it wasn't even the first horror movie to use the gimmick. Yet its low-fi aesthetic and clever marketing were novel ideas, no matter what you thought of the final product (I'm actually relatively fond of it). However, originality soon became cliche as countless filmmakers jumped on the bandwagon with their own faux 'discovered' footage. We've had aliens / monsters (Cloverfield), we've had ghosts (Paranormal Activity), and we've had quarantine zones and weird supernatural girls who live in the attic (REC and its numerous remakes, sequels and sequels to remakes). Most of these have been entertaining to various degrees (at least harmless fun), we've also had quite a bit of out-and-out shit, like the laughably poor efforts The Fourth Kind or Apollo 18. And now we have trolls.

To the film's credit, they approach what could easily now be described as a stale 'genre' with tongue-in-cheek. In Norwegian Fjordland, three students - Thomas (Glenn Erland Tosterud), Johanna (Johanna Mørck), and Kalle (Tomas Alf Larsen) - are trying to track down and interview a local eccentric Hans (Otto Jespersen) who has been accused of hunting and killing wild bears. Despite his hostility, the cameracrew follow Hans and soon discover that he hasn't been hunting bears at all, but is instead the titular troll hunter: secretly following government orders to keep the population of mythological giants in check.

It's an original spin on the idea of found footage, albeit with a delivery that doesn't always embrace the subversive potential of the concept. When indulging in Scandinavian and European folklore, Troll Hunter is a delightfully silly monster movie. These dim creatures are a well-considered mix of fairy tale absurdity and monster movie aggression. They can smell the blood of a Christian man. They lurk under bridges. They enjoy snacking on billy goats. They hate bright lights (making for the film's best repeated visual trick). Rendered in cartoonish but effective CGI, they're easily the best idea the film has. Luckily, it's a good enough one to keep you entertained throughout. Jespersen world-weary hunter is another strong point, and makes for a compelling offbeat action hero. He makes up for the comparatively bland student characters.

Otherwise, it's fairly standard stuff. There's a lot of shaky handheld running through forests, and even more shots of pretty fjords. It's not quite a horror movie, and it isn't quite a comedy either. It's a strange hybrid of the two, and while it doesn't always help the dramatic flow of the movie, it does give the film a unique tonal identity. It's never laugh out loud funny, but there's a consistently absurdist tone and a handful of moments of genuine wit. Highlights include the subtle shift to an 'artier' camerastyle when a professional cameraperson arrives on the scene, or Hans facing off against a bridge dweller in a bizarre homemade suit of armour: you almost wish the filmmakers would indulge in the mockumentary stylings with more regularity.

Overall The Troll Hunter is some distance away from being a great film, but it has enough charm and energy to keep you engaged over the brisk running time. It's a short, sweet and very Scandinavian riff on a tired formula. The mandatory and entirely unnecessary English language remake is, by the way, on the way. The endless recycling of original ideas continues unabated.
Posted by thecynicalgamer at 10:22 PM