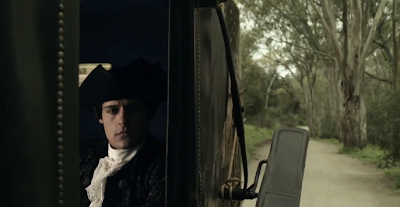 I'm trying to recall if Mysteries of Lisbon is the longest film I've ever watched.  It's twenty minutes longer than the extended cut of Return of the King. It makes Love Exposure seem comparatively brisk and lean. And I still haven't got around to that extended cut of Fanny & Alexander. So for now, weighing in at 272 minutes - not including the mandatory bladder-emptying intermission - I'm pretty sure Mysteries of Lisbon is the lengthiest single cinema trip I've ever had. Was it worth it?

The final film from director Raúl Ruiz (who passed away shortly after the film's completion), Mysteries of Lisbon features a plot that is too labyrinthine to in anyway adequately synopsise. The starting point is young Joao, an orphan boy being educated in an orphanage / school presided over by Padre Dinis. Following a confrontation with another boy, Joao falls ill. In his delirious fever, he recalls a woman visiting his bedside. Soon revealed to be his mother, the surprise reunion sets off a chain reaction of further revelations and remembrances. As more characters reveal their backstory, an elaborate game of 'six-degrees-of-separation' unfolds as characters discover links in surprising, dramatic and enlightening ways.

Fanny & Alexander is an apt comparison, as both are works from older, wiser auteurs. Both have lush visual & art design. Both have beautifully realised period settings. Both feature a large and varied cast of eccentric characters. Both integrate carefully considered fantasy elements. And they're both very long indeed, with extended television cuts for those who can't get enough.

The episodic nature of Lisbon is obvious: roughly every forty-five minutes of the film focuses on another character narrating their particular history. Naturally at such an extended running time not every story is going to engage everyone to the same degree. They're largely melodramatic affairs, but presented with tongue-in-cheek, and there's a real joy in discovering the thematic and narrative echoes between stories. Padre Dinis (played with great skill and likeability by Martin Loizillon) is often the linking factor, and the revelations concerning his characters are generally the most intriguing of all (Ricardo Pereira's enigmatic and obnoxious nobleman Alberto a close second). It's no coincidence that it's a man of the cloth bringing everyone together, and a omnipotent sense of divine intervention is an ever-present but playfully handled theme. A mischievous examination of bourgeoisie culture, rumour and scandal is another fascinating thematic focus: the film's cleverest running visual gag shows servants, colleagues and curious onlookers staring through windows and doors as characters and couples engage in their most private and personal moments. The parallels with contemporary society are ever-present, and the whole issue of class division (or lack thereof) is handled with great consideration by Ruiz.

The visual & art design are indeed the film's other great achievements. We've all seen countless inoffensively gorgeous period dramas before, and on one hand this is no different. The 1800 Portuguese & French environments sparkle with detail, from the grand ornamental locations to more subtle yet rewarding background details that help authenticate the setting. But this isn't just another bland period piece, and there are constant bursts of stylistic invention. The whole film is mostly shot in breathtaking and dynamic long-takes, ensuring the camera always feels alive. Then there are the more unusual visual traits - from characters almost floating across the screen to the hazy fever sequences. All-in-all, it looks great for the entirety of the four-hour-plus running time.

There's no denying the constant melodrama (lots and lots of affairs afoot!) and considered pacing can be exhausting as Mysteries of Lisbon enters its third, fourth and fifth hours. At its worst, a sense of repetition can set in, although the vast majority of the characters are engaging enough to hold your attention. Flawed though it may be, it is still a majestic and unique piece of work. The scope is grand, the narrative sprawling and the characters fascinating. Mysteries of Lisbon certainly rewards those who are willing to endure it.
Posted by thecynicalgamer at 10:39 PM