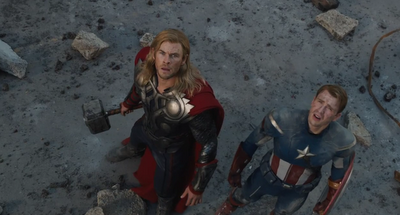 So here it is. After several establishing films and hundreds of millions of dollars (both budget and box-office) The Avengers arrive (or Assemble, if we're to reflect that peculiar marketing subtitle) on screen, together for the first time. While not all of them enjoyed the luxury of individual feature-length introductions, anyone whose followed the recent torrent of Marvel films will recognise all these faces and characters. For the first time in big-budget cinema, we have a collective of comic books' most famous heroes - Iron Man, Hulk, Thor, Captain America, Black Widow, Hawkeye and various other cameos and bit-players - fighting evil together. But why, for a film with no shortage of personalities, does it feel so characterless?

(The rest of this review contains light to moderate spoilers, although I have mostly avoided specifics: if you're sensitive to that sort of thing, don't say I didn't warn you!)

Anyone who has seen the preceding films will know the basic gist of this. Shit hits the fan for Nick Fury (Samuel L. Jackson) and S.H.I.E.L.D. when Thor's mischievous and arrogant brother Loki (Tom Hiddleston) makes off with the magic glowing blue cube thing that opens the gate to another galaxy or something. Fury is forced to assemble a crack team to deal with the potentially apocalyptic threat. Some are reluctant (Mark Ruffalo replacing Ed Norton as The Hulk / Dr. Bruce Banner) while others like Captain America (Chris Evans) are eager for the distraction. This unlikely force finally brought together, they are tasked with defeating Loki and preventing an even greater evil. But can this band of misfits even stop arguing for long enough to achieve that?

For a film that basically has had five or six feature-length prequels and scene-setting, The Avengers sure takes an awful long time to get going. We're asked to endure the guts of an hour of sluggishly paced setup before things inevitably kick off. Getting everyone in the same place proves a particularly troublesome task for the writing team: Thor's (Chris Hemsford) belated arrival is notably underwhelming, and illustrates a strange disregard of the character's cliffhanger at the end of his dedicated film. The dodgy pacing - at over two and a half hours, the film consistently struggles to hold our attention - is the film's biggest flaw, and simply doesn't have enough narrative surprises to justify what is in essence quite a simplistic and predictable plot.

Things improve significantly as the film enters its second act. Director Joss Whedon is allowed to play to his strengths - the characters are forced into a relatively confined space, and their dynamics and interactions become the film's saving grace. The dialogue is sharp and witty, and the talented cast play off each other in fun ways. While Robert Downey Jr's Tony Stark remains the most compelling of the bunch, most of the extended cast are given a chance to shine: a sharply written and directed scene where Scarlett Johannson's Black Widow confronts Loki stands out on both a directorial and performance level. We get a glimpse of that clever and brilliant Joss Whedon: the same guy who made us truly care for the crew of The Serenity, and pretty much dismantled the horror genre from the inside-out with Cabin in the Woods a few weeks ago.

However, ultimately the heroes emerge as one-dimensional beings: at worst, differentiated only by their costumes and superpowers. The curious, potentially fruitful character motivations established in Thor, Captain America and others are all effectively abandoned, making this feel like somewhat of a stop-over between the inevitable dedicated sequels. There's a brief moment when you're lead to think Natalie Portman might show up to make things interesting, but alas it's not to be. Instead, it's only the MacGuffins and a handful of characters that reappear (including Stellan Skarsgaard, and series regular Clark Gregg as Agent Coulson). After almost five years of teasing The Avengers, it's a little tragic that The Avengers itself just seems to tease another five years of sequels. Visually, the film is consistently clean and cartoonish. It's a little characterless, but suits the light-hearted tone. An unexpected fatality is a rare dark moment in a film distinctly lacking the element of surprise.

The film's final act unfortunately features the same weaknesses of the first while retaining some of the charm of the second. It's basically an extended action scene. Unfortunately, the film's main threat is a metallic extra-terrestrial army that recalls several other recent blockbusters, and not blockbusters where comparisons are necessarily a favourable thing. Such an uninteresting and generic enemy is at odds with the colourful heroes, who at least get a chance to flex their super muscles in entertaining ways. There's fun to be had watching six different heroes at work, and there's the odd thrilling moment where they actively join forces to great effect. The Hulk gets all the best gags, though: in this case literal punchlines.

What ultimately disappoints about this crossover is its lack of personality, which is unusual for a film so full of distinct personalities (both in-front of and behind the camera). There's little to differentiate it - apart from scale and sheer bulk of protagonists - to any of the films that preceeded it. On a purely entertainment level, The Avengers delivers some light thrills and the odd good-natured chuckle (there's a great gag directed at retro gaming enthusiasts). Yet Whedon and the characters struggle to separate themselves from the crowd, and in the end it all just kind of blurs into your typical popcorn nonsense. It's shallow, silly and loud. If you approach it on those terms, then The Avengers will offer you a mostly harmless night's entertainment, no doubt about it. But there's the distinct feeling that there's a much better film threatening to emerge here. It never does.
Posted by thecynicalgamer at 2:40 AM