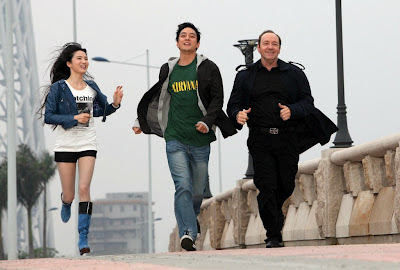 Now this is an odd one. It's quite likely Inseparable will end up in a slightly wider range of theatres than your average Chinese film. It may well attract quite a bit of media coverage, and it is likely to get a relatively significant DVD release. This is for one very unusual reason: it stars Kevin Spacey. Not as a cameo (compared to Peter Stormare, who makes a much more fleeting appearance) but rather in quite a meaty, significant role. He's second in screen-time only to lead Daniel Wu, and maybe if you were to nitpick ties in terms of coverage and exposure with female lead Beibei Gong. To have such a notable American star front and centre in a Chinese film is pretty much unheard of, and will inevitably entice curious onlookers. But it doesn't deserve to, because the film isn't very good. Not very good at all.

Wu plays Li, who - for never wholly convincing reasons - is introduced in the middle of a suicide attempt. He's saved from himself by Chuck (Spacey), a new American neighbour who knocks on his his door in the middle of the hanging. Li, it transpires, is in the midst of a marital and professional crisis. His unreasonably beautiful wife Pang (Gong) has been extremely distant since the miscarriage of their child. Except for the weird scene where they're illustrated as the picture of happiness, only to be actively contradicted by every other scene, but that's a cynical aside. Li's company, meanwhile, is in the midst of a legal hoo-ha, and Li's obnoxious manager is encouraging him to fib to the court in order to get them out of this particular pickle. Into these moral conundrums swoops Chuck, who encourages Li to break the rules and learn to live again. They become masked vigilantes, ridding the city of the morally corrupt. This new found lease of life has positive consequences on Li's marriage too. Everything's looking up, but there's a few oddities concerning Chuck that will lead to some unfortunate revelations...

I'm afraid I can't accurately critique this film without commenting on those revelations, but I will relegate them to a designated spoiler zone below for those who may be sensitive to that sort of thing. Generally, however, there are more than a few more general issues with the overall story. The tonal inconsistency is perhaps the most significant. Billed as a 'dark comedy', Inseparable is anything but. It's almost completely devoid of laughs, and it lacks both bite and bark. After seeing something like, say, Super, Inseparable is completely unable to delve into the more disturbing depths of the characters. We barely even get hints of their inner darkness. So the film veers wildly from broad comedy to psychological strangeness by way of sentimental romance. Occasionally, it suggests that it's going to harshly satirise and criticise corporate corruption in China, but it's too half-assed to really succeed in that regard. It is a hint at some sort of passion and enthusiasm, however: qualities lacking elsewhere.

More damning still is the fact that the characters are at best uninteresting, at worst contradictory, and buoyed little by the performances. Spacey is on autopilot, with some lines bizarrely grammatically awkward and inaudibly mumbled (the dual language subtitles are a distracting but necessary compromise to a film that constantly drifts between languages). It's some distance from his best work, and a largely unlikeable performance. Wu is bland but competent, handling the demands of both English and Mandarin relatively well. Gong is gorgeous, although stuck in a mostly thankless role. The direction is uninspired and barely perfunctory. Almost nothing jumps off the screen in Inseparable, and a poorly judged soundtrack that sounds like some forgotten 80s porn soundtrack further denies any sensory solace.

But what's most unconvincing of all is the plot. With the major revelation that Chuck is not real and rather a figment of Li's troubled mind, the film shoots off in off-the-wall directions while consistently failing to achieve, well, consistency. At least the film reveals its sub-Fight Club twist relatively early in proceedings (and obvious well before that, in large part due to a misjudged elevator scene), even if goes on to do very little of interest with it. An unexpected third act reversal that suggests Pang is fictitious as well is a briefly diverting and potentially interesting development. You quickly realise, alas, that said twist would make absolutely no sense at all given what came before. So it's not to be, and the film struggles to find satisfactory or unexpected answers to the anguish and confusion of its protagonist, instead resorting to a wearily predictable happy ending.

I've made the film out to be almost entirely worthless, and while that may be true it is also fairly harmless. Some may well enjoy it on its own limited terms. But what's disappointing is that Inseparable often threatens to become a much more interesting film that it actually is. Yet said task is clearly beyond the remit and abilities of the creative team. Inseparable, then, is a film that's an uneven culture clash with an identity crisis: unsure of its genre, characters or tone. These are massive inconsistencies that even Kevin Spacey cannot hide, and frankly wouldn't be forgiven in a Western production. Inseparable's eccentricities may warrant a cautious viewing out of sheer morbid curiosity: expect little and you may not be disappointed.
Posted by thecynicalgamer at 11:41 PM