Review: The Woodsman and the Rain 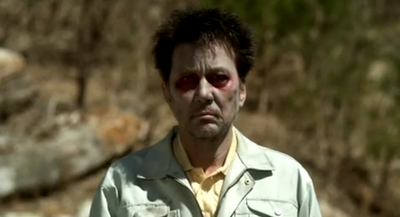 Going into The Woodsman and the Rain, I had absolutely no idea that it was from the same director as The Chef of South Polar. Crawling the Internet for pointless trivia afterwards, discovering that it was indeed another work from director Shuichi Okita was a pleasant surprise, and one that made an awful lot of sense in hindsight. Both are very amusing comedies with strong characterisation and a relaxed, engaging narrative flow. There's not as much food pornography on display here, but it's replaced by an affectionate look at amateur film-making in Japan. And zombie jokes.


The film opens with the widower woodsman of the title, Katsuhiko (Koji Yakusho), felling a tree. He's approached by awkward assistant director (Kanji Furutachi) who informs him that they're shooting nearby, and kindly asks if he would keep quiet for a while. Katsuhiko is initially confused, and then reluctant, but finally gives in. Several days later, Katsuhiko runs into the AD again, this time in the company of the even awkwarder director Koichi (Shun Oguri). Against his will, Katsuhiko is forced into driving them around the village on a location scout and later ends up as an extra in the zombie film they're shooting (entitled, if I recall correctly, 'Utopia'). Over the following days and weeks, Katushiko is drawn further and further into the production. Will Katsuhiko's relationship with the young, mumbling Koichi help him communicate with his own layabout, unemployed son?

The father-son dynamic probably isn't the most convincing element of the film, truth be told, but is a rare underwritten aspect of an otherwise endearing piece of entertainment. The film treats its characters and situations with affection from the outset: while we're occasionally invited to laugh at them (Katsuhiko's early attempt at undead acting is a particularly chuckleworthy moment) they're all still very likeable sorts, and the dynamics between them create both a plethora of comic moments and a deeper emotional resonance. First and foremost this is an uplifting, crowd pleasing movie. As the villagers become more invested in the film production (there's a priceless sequence where Katsuhiko's relatives visit to discover a village full of zombified residents) it's hard not to root for the lot of 'em, as well as the film-makers.

On that note, the insights into amateur film-making in Japan are fascinating and rewarding. How accurate it actually is is something I'm unable to comment on. But it's great fun watching the crew at work making what is, in essence, a very silly film indeed (albeit one with an amusingly grim ending). Initially, most of the technical stuff happens off-screen (fascinating to discover 'Hai!' is the Japanese equivalent of 'Action!', or so it sounds). But as the villagers volunteer themselves as extras, the scope of the production increases, and there's some fantastic setpieces as the film crew watch on in bemusement as the 'actors' unconvincingly lurch and groan forward.

For the most part, Okita directs all this in an understated manner, with only limited showing off from cinematographer Yuta Tsukinaga. But there are stylistic flourishes throughout, not least a wonderfully rainy climax (what is it about Japanese directors and their peerless ability to film rain and mud?). Okita and his crew are also acutely able to frame and edit a joke, so the comic timing is razor sharp throughout. Screenwriter Fumio Moriya (in slightly different territory than his work on the bizarre but entertaining pink musical Underwater Love) creates a fine balance between wackiness and thoughtful character development. A limited use of music throughout is also welcome, meaning the audience isn't always 'told' when to laugh or when to emote. The occasional glimpse of the 'film within a film' being produced are welcome diversions.

Certain sections of the story may not be all that insightful, and like Chef of South Polar one could argue the film could do with a slightly leaner running time. But overall The Woodsman and the Rain charms and entertains for its duration. It's a simple tale told very well indeed, with strongly defined characters that are easy to relate to and like. Mostly, it's a very funny film, and while films about film are a dime a dozen, rarely are they as good-intentioned or affectionate as this one is. A thoroughly enjoyable film that certainly deserves a wide audience if and when it receives a full Western release.
Posted by thecynicalgamer at 11:21 PM