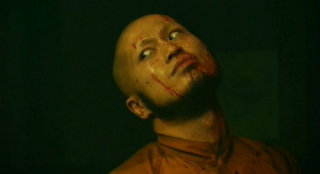 In the first of a new series on filmhaha.com, we present a series of offbeat double-bills. These are not films from the same franchise or director. Remakes are unwelcome here, as are re-adaptations. Instead, we'll examine a series of films that resonate with each other in various intriguing ways in order to act as surprisingly effective duo. These resonances can include distinct riffs on a theme, curious stylistic contrasts or films with similar concepts that are executed in entirely different ways. We'll start with some B-Movie fun, analysing the pulpy thrills offered by two entries in the surprisingly underexplored 'Elevator Horror' subgenre: Hiroki Yamaguchi's Hellevator: The Bottled Fools and John Erick Dowdle's Devil.

To me it's altogether unusual that two films exist that are both predominantly set in stranded elevators and have a preoccupation with supernatural concepts of the afterlife. I'm not sure exactly what it is about elevators that reminds film-makers of hell, but they obviously do. Maybe it's the claustrophobia. Perhaps the spiritual symbolism inherent in the binary opposition between an ascent and a descent. Could be the elevator music. Probably the music.

Straight off the bat, Hellevator is off to a more promising start. The title alone deserves a full pun out of ten. It's only fair to admit the title is clearly the creation of some very amusing marketing guy in the West somewhere, but it's certainly an improvement over the original, unwieldy Japanese name of Gusher No Binds Me. But a quick glance at such a ludicrous title sets the tone expertly, and lets you know you're in schlock territory right off the bat. Devil, in comparison, is a frustratingly bland and non-descript descriptor, and certainly doesn't emphasise the unique selling point that is its elevator setting. Sure, there's a devil in it, but who cares? We're here for the lift. One point to Hellevator! Ding ding ding!

However, when we get into the actual film, it doesn't take long to prove that Devil is far more interested in the underworld than Hellevator is. Heck, the elevator in the Japanese film goes up, not down, which is surely a missed opportunity (note: admittedly, the floors are inverted in the film, climbing up to the 'first floor'. There are rumours of a floor '0'. There's no chance that will come in to play in the film's final moments. No chance at all. Ahem). Only a last minute twist sort of justifies the puntastic title (more on that front later). But Devil piles on the hellish tone right from the overwrought monologue that opens the film. There's a load of lads stuck in a lift and one is the devil. Simple. Hellevator's lift is certainly hellish, but not literally so. It's a bit more complicated than that. Devil is so insanely high concept that it can be easily synopsised in a mere sentence. One point to Devil! Ding ding ding!

Let's move onto execution. Well, it's looking like Hellevator will be getting the points here for sheer batshit insanity. Set in a weird dystopian future with a ridiculous cyberpunkian aesthetic - which, being honest, seems like it's merely a contrivance to get some psychotic convicts in a lift with some civilians - the art design is certainly unusual and enthusiastic. Not to say it's fully successful - the low budget is immediately obvious, and it looks like it was shot on a lesser quality camera phone at times. The one or two CGI shots (think Playstation One quality) the budget allowed are endlessly repeated throughout the film, as are - bizarrely - a single shot of grinding gears. But it's certainly an offbeat visual design, and the elevator itself is a grim industrial delight that's ripe for entrail spilling (and entrails are certainly spilled). One character has a pet brain too, which is nice. The characters are an oddball bunch - from a telepathic (!) schoolgirl protagonist through the hairless convict to the almost robotic elevator attendant. One scene tries to emulate the Matrix without any of the money, which is admirable in its futility. There's a cool bit when some synchronised salarymen get into the elevator and pull out cord phones. Absolutely pointless, but cool. While Devil offers some intriguing stylistic flourishes - not least the fact that everything goes dark during the murderous moments to help encourage a sense of mystery - as certainly has higher production values, it's still altogether less memorable visually, set in your average everyday bland elevator, full of bland characters in bland costumes. One point to Hellevator! Ding ding ding!

The non-elevator content of both films is entirely uninteresting: whether it's the pointless flashback structure of Hellevator or the idiotic police investigation subplot of Devil. No points for anyone.

And now, a moment of reflection for the gore hounds amongst you. What would a B-Movie be without some schlocky exploitation? Devil disappoints in this regard: the killing occurs in darkness. The aftermath is grizzly, but sensibly so. This is Hollywood, after all. Hellevator features someone gratuitously getting their scalp pulled off for no immediately obvious reason, and also has a scene where a dead baby is found in a paper bag. A semi-rape scene drifts close to outright tastelessness. As an exploitation film, Hellevator certainly will make you feel a little seedier while watching it, and you'll probably be embarrassed if a loved one wanders into the room at the wrong moment. It's far from the most extreme or shocking thing exploitation cinema has to offer, but is certainly is more aware of its pulpier foundations than Devil. One point to Hellevator! Ding ding ding!

Attempts at social commentary in both are limited, and I may be reading too much into them. Hellevator seems to equate its confined setting as some vague analogy for the monotony of modern commuting: an endless journey of traveling from one bureaucratic destination to the next. Again, I'm probably giving it too much credit. Devil, on the other hand, makes its moral motivations abundantly clear. Each elevator occupant is an asshole, and is sure as hell going to suffer for it. It's certainly not subtle. But... wait. What's this, in the closing seconds of the film? "If the Devil is real, then God must be real too". Wait, did I just watch some sort of thinly-veiled Christian proselyting? Bad Devil. Bad. Minus one point for Devil! Ding ding ding!

And so: the twists. Spoilers ahoy, for anyone who cares, but you probably shouldn't. Devil emphasises its 'based on a story by M. Night Shyamalan' credit proudly. Indeed, it was intended to initiate a series of Shyamalan produced films known as 'The Night Chronicles'. We can only hope such a terrifying threat never comes to any further fruition. Anyway: the devil is the old woman. She died earlier, but RED HERRING and all that. Meanwhile, a last second (literally - that's the jumpiest framing and editing I've ever seen) revelation informs us that the dystopian future of Hellevator is actually located underneath contemporary Tokyo. Apparently the rooftops of Tokyo are covered in grass or hay or something. I guess the twist sort of makes the Hellevator moniker a little more relevant, but I'm not really sure it enhances the overall narrative that much, if at all. Or maybe Tokyo's hell? Frankly, I don't particularly care. Devil's twist is silly, but it at least provides some very mild insight into previous events. One point for Devil! Ding ding ding!


Conclusion: both films are relatively harmless yarns about a bunch of psychopaths stuck in elevators. Hellevator is ultimately a little more batshit insane and distinctive, but both provide us with a core insight: everyone's an asshole, and if you get stuck in an elevator with a few of them, you'll probably be murdered. Valuable moral ponderings, I'm sure you'll agree.
Posted by thecynicalgamer at 2:34 AM