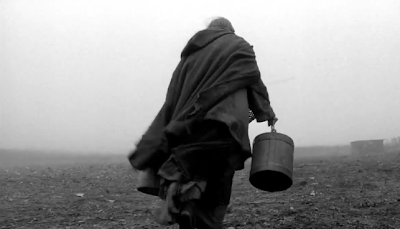 There are times when the lights go up in a cinema, and although barely a word is exchanged, you just know everyone else has just been through the same emotional voyage that you have been. It's that great communal theatre experience, and one that simply cannot be emulated at home. And when the lights came up following The Turin Horse, those who had survived (only two walkouts, which isn't too bad considering) all certainly felt exhausted and a little depressed. Whether they were impressed or not? Well, that's a slightly tougher one to call.

At a basic level, you could probably call The Turin Horse an apocalypse film. Opening with a spoken narration over a black screen, the film establishes that Friedrich Nietzsche was driven into a debilitating mental breakdown following an incident involving a horse being flagged on the street. The film then proper opens with an extended image of the horse being led through a powerful windstorm by his owner (János Derzsi). When he reaches home, the man and his daughter (Erika Bók) take shelter from the storm. Over the course of six days, the storm gets worse and worse. Their well dries up and they're visited by some unusual individuals. The situation grows desperate. And they eat potatoes.

A confession: this is my first Bela Tarr film, and I have to admit I approached it with cautious pessimism. Yet, while the film is certainly difficult and occasionally infuriating, the pessimism largely evaporated over the course of two and a half grim hours. The haunting cinematography by Fred Kelemen is simply stunning: thirty long takes, each one full of unusual camera movements and striking black and white imagery. The images are crisp as can be, and as a purely visual feast this is a triumph. The looping soundtrack, on the other hand, often suits the visuals perfectly, but other times may well drive you temporarily insane.

The overall atmosphere is unrelentingly grim: so utterly devoid of hope that it makes some of Bergman's more cynical productions look boldly optimistic in comparison. Tarr (and his collaborating director Ágnes Hranitzky) paint a universe of diminishing returns, desperation and futility. A commentary on the challenges of the artistic process? A critique or interpretation of Nietzsche's writings? A biblical analogy? All of the above? Whatever the individual viewer takes from it, it's certainly exhausting and powerful. A line or two of extremely understated black comedy is all the relief you get over 150 minutes.

This is a film built upon the very concept of repetition, and it's in that regard that many are likely to reject it. Understandably: we have to watch the father and daughter exchange barely a word, stare out a window for extended periods of time, graphically eat potatoes (borderline potato porn at times, with Derzsi's bizarre eating technique particularly worthy of note) and dress themselves / each other over and over again. Each time we see a repeated action, it's with subtle differences or varying motivations, but this is a film obsessed with the everyday. It's hard to say whether it's a success or not. While there were certainly times I was drawn into the repetition and routine, there's little doubt Tarr makes his point early on and just rubs it in. That's the point, but it's also a frustrating one. Give yourself over and you may get lost in all of this. It may just as easily infuriate.

The Turin Horse is a difficult one to critique for a wide variety of reasons. The elements that may frustrate many are probably the intention of the directors, and are likely to woo as many as they repel. For me, it was mostly a haunting and often beautiful film, albeit one that will test even the hardiest of patience. Its visual beauty is hard to deny, even when faced with the fifth scene of potato peeling. Confident in its eccentricities, almost incomparable in its execution: The Turin Horse is dense, repetitive and provocative. You'll definitely emerge depressed, but also maybe - just maybe - impressed.
Posted by thecynicalgamer at 2:19 PM