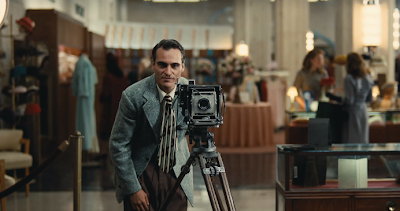 The Master - Paul Thomas Anderson's genuinely fascinating new opus - is not the film for anyone looking for traditional plotting, narrative resolution or an evening's light viewing. It is unashamedly, often invigoratingly difficult, and - like the Rorschach tests that feature prominently in both the marketing materials and the film itself - is bravely open to interpretation. While we're all subjected to the same images on screen, this sprawling, intense and infuriating oddity is almost immune to viewer consensus - The Master will mean very different things to different people.

At its core, The Master is a character study, or perhaps more appropriately, a relationship study. Freddie Quell (Joquain Phoenix) is a WWII veteran in a state of near insanity - drifting aimlessly between crazed sexual encounters and barely justified fist fights armed with only a bottle of homemade toxic booze. After a particularly risky bender, Quell drunkingly stows away on a docked ship. He's quickly discovered, but instead of being ejected is introduced to the ship's captain - the charismatically unhinged Lancaster Dodd (Phillip Seymour Hoffman). The cap'n takes an instant shine to Quell as a result of a certain poisonous elixir. Dodd and his wife Peggy (Amy Adams) are the leaders of a movement known as 'The Cause' - a ragtag group drawn together as a result of Dodd's philosophical publications. The Cause members are embarking on a fundraising trip of the East Coast of the US of A, and the rapport between Dodd and Quell ensures Freddie is quickly embraced by the group. As the two men spend more time together, Dodd's unconventional methods begin to evoke some strange changes in the once seemingly hopeless Freddie.

The 'friendship' between these two very different men is dynamic and frequently explosive. Dialogue scenes have rarely come across as so vitally cinematic. The title gives you a hint about how it all generally plays out, but this is a complex relationship that fluctuates wildly throughout the film's 140 minutes. At first, Dodd is the dominant force - managing to persuade and provoke his troubled protegee through a series of tests and carefully considered ploys. In what is arguably the film's most remarkable sequence, Quell is victim to a rigorous, intense psychological dismantling by Dodd. Anderson frames the scene in intense, disquieting close-ups and later uses the opportunity to seamlessly cut to flashback and probe Quell's most defining trauma. He has been well and truly broken, if only temporarily, and it's amazing to watch.

But Dodd - fond of the hooch and unrestrained bursts of obscene aggression - is himself a tortured soul. His bravura and vague philosophical ideas have won him numerous followers, but as the film progresses he's shown to be increasingly unstable. Indeed, there's the strong suggestion that without the smart, forceful Peggy he would be reduced to a ranting, disturbed mess. Quell, meanwhile, is forced to confront his own identity and history through his time in The Cause, and is ultimately driven to seek a path of independence, and attempts to liberate himself from the man who once tore him apart. 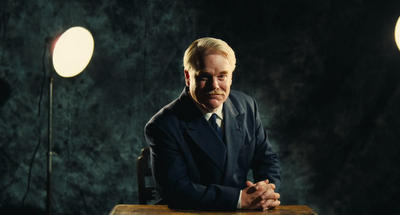 It sounds like a relatively straightforward power struggle, but it's anything but. The film is utterly strange from the outset, full of peculiar tangents and psychological trickery (Johnny Greenwood's truly bizarre score only enhances the oddness). The Master is effectively a series of conversations, albeit disrupted by frequent eccentric curveballs. The film opens with a brilliantly uncomfortable sequence of seaside frolicking, with Quell concocting his dangerous cocktail of coconut juice and engine oil between public masturbation sessions. It's almost the antithesis of the opening of The Thin Red Line - this paradise offers no serenity. Later, the film flirts with perspective while forcing the viewer to work through the multiple possible permutations and interpretations. At one point a scene appears to be just another social gathering, but in the middle of the scene Anderson without warning removes the clothes of all the females in attendance. It's a startling distortion of form. What point of view are we watching this from? Another strange sex fantasy of Quells? A vivid visual symbol of Dodd's domination over his subjects? A reminder of social inequality during the post-war period? In a film that often focuses on the peculiar powers of persuasion, Anderson suggests possibilities but never deprives the viewer of the opportunity for personal interpretation. The director has the rare power to craft without condescending - a true master of his art.

As for the already infamous Scientology similarities? They're there, in mostly heavily fictionalised form, but this is much more than a mere deconstruction of cults and organised religion (easy targets). This is a film about many, many things - he challenges of leadership, overcoming trauma, group dynamics, the persuasive powers of trickery, the role of family... We can all eagerly wait for the thesis on this film to come rolling in.

The film's performances are astonishing. Phoenix is the standout, displaying a devastating physical and emotional commitment to the role. It's a testament to his efforts in bringing Quell to life that I genuinely felt concerned for the mental stability of Phoenix himself, such is the rawness of the performance (a concern further heightened by his infamous 'rapper' hijinks). Hoffman, if not quite as sensational, is still wonderful, and can more than hold his own throughout the films many lengthy dialogues. Dodd is a contradiction - both forceful and fragile - and Hoffman is never less than absolutely convincing. Support is strong, even if the cast face the unenviable position of acting against two genuine powerhouse performances. Adams is particularly good - continuing to take risky roles in her stride and being rewarded accordingly. Laura Dern pops up occasionally as a wealthy zealot, as do some younger recurring cast members as Dodd's family and disciples. But effectively this is a two role film, with Adams the only supporting cast member gifted with the space to bring true weight to her role - perhaps the film's third master, albeit in a way that's even more subtle and difficult to articulate than the two leads.

An extended note on the 70mm visuals. I was lucky enough to catch a print while visiting London, even if Odeon's West End screen was a tad smaller than is ideal for such high quality source material. Still, it's the way to view the film. Expensive 70mm stock is traditionally reserved for epic, sweeping visuals. I recently watched Baraka in the format, which is a perfect example of that - the most suitable format for emphasising that film's majestic landscapes and elegantly complex cinematography.

The Master is different. As a film of discussions and conversations, it's almost the polar opposite to Baraka. With a few exceptions, of course - a memorable, narratively significant desert sequence and a recurring image of lapping waves behind a boat benefit from the clarity and vivid colourisation of the film stock. However, for the most part The Master might be the most subtle 70mm film ever made. Yet: it works. Most prominently, the distinctly cinematic and grainy look of the format ensures the filmmakers work wonders in crafting a modern film that's deeply indebted to classic aesthetics. It's hard to describe exactly why, but the medium allows the period setting to become extremely credible without the need for bludgeoning the audience with excessively signposted period detail. It's most evident in the department store sequence near the start of the film - there's something about 70mm that enhances the architecture and colour of that location with an authenticity that even the best digital cameras would struggle to recapture. Elsewhere, the clarity of the cinematography ensures that the actors' performances are captured with almost unsettling detail. It may not offer the same volume of 'wow' moments as other 70mm efforts, but there's little doubt the unusual (and costly) format choice fully enhances the experience of watching The Master in the cinema. Catch it if you can.

A confession: I watched The Master after not quite enough sleep, and the film's extended second act occasionally proved exhausting. The film's militantly unrushed pacing will inevitably prove challenging to even those who have enjoyed their full eight hours. It's a slow film - some will say dull. One cannot view The Master without expecting a challenge - it's taken me close to a week to sit down and write this, and I remain uncertain about countless details. It's a nontraditional film, even by Anderson's experimental standards. But cinema cannot provoke or provide insight without first offering the viewer something difficult to work through. The Master is obtuse, sometimes maddeningly so. It openly mocks those looking for closure or (in the words of the Dogme 95 crew) superficial action. The result is easily the most distinctive American film of the last number of years (and it's been a pretty good year for American cinema on the whole), made by an auteur who knows what rules to obey and which ones to shatter. It's strange and provocative, and during its best moments almost undoubtedly brilliant. It will woo some, bemuse others and irritate the few. Some might even experience all three responses in equal measure! A film this brave and unconventional deserves nothing less than such a completely divisive response.

Posted by thecynicalgamer at 11:19 PM