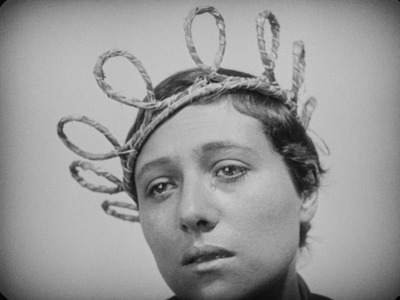 I've only really had a keen interest in silent cinema in the last year or two, particularly after having the opportunity to see timeless masterpieces such as Sunrise: A Tale of Two Humans, Metropolis and Battleship Potemkin in the cinema. But it's remarkable how fresh and exciting it can be to see what the great masters of early cinema achieved with their limited technology. Uncertain yet excited by the potential of this rapidly evolving medium, the great silent directors brought a level of experimentation, enthusiasm and passion to their endlessly ambitious works that never ceases to amaze. Far from being rendered redundant or outdated by the films and artistic advances that follow (although is there any cinematic tragedy quite like the sudden, harsh death of silent cinema?), the key early treasures can still only but enhance our love and understanding of cinema from all eras.

When I saw The Passion of Joan of Arc make it into the Sight & Sound top ten earlier this year I instantly bumped it - along with several dozen other titles that made the long list, I must confess - up my to watch list (La Règle du jeu, remains the last of the 'big ten' I've yet to get around to). The film was available with ambiguous legality on the likes of archive.org, albeit in predictably appalling quality. I happily decided to wait it out when I saw those glorious bastards responsible for Eureka! Distribution's Masters of Cinema label (the closest thing we Irish / UK film enthusiasts have to a local Criterion) were planning a Blu-Ray release.

I sat down to watch said (gorgeous) HD transfer last night and it's absolutely magnificent. The film effortlessly withstanding nearly a century of subsequent cinema. Directed by Carl Theoder Dreyer, this is a decidedly and impressively non-traditional take on the Joan of Arc story. Purposefully far removed from the typical armoured goddess portrayal, the film intensely focuses on the trial and subsequent burning of Jeanne (played here, with startling wide-eyed intensity by Renée Falconetti in her sole cinematic performance - and what a fucking performance!).

Passion of Joan... is a surprisingly frank critique of religious dogma and how it can terrifyingly sway seemingly sympathetic individuals to persecute people who share the same basic beliefs. Joan is unwilling to 'confess' anything, because she is staying steadfastly true to her convictions. The monks, priests and friars interrogating her are not pleased with her refusal to concede, and they use every means available to break her. It's a beautiful testament to the strength of individual belief, but shocking deconstruction of how said beliefs can be undermined by organised belief systems and self-appointed moral, ethical and religious authorities. The story may originate in the fifteenth century, and the film is nearly a century old, but the themes are as vital and informative as ever.

The film has extremely considered pacing - a handful of sets utilised over 90 minutes or so (a tad shorter if you go for the 24 FPS version, a brief note on which will follow) - but it's consistently engaging and unsettling. While Dreyer successfully crafts a very emotional and humanistic film - even allowing the 'villains' of the piece to be painted in shades of intriguing grey rather than a stereotypical portrayal of pure 'evil' - Passion is undeniably an uncomfortable and humbling experience. Joan is put through a series of physical and mental humiliations, with Falconetti having her hair shaved off in one of the film's most unsettling, heartbreaking scenes. It all builds up to what might be one of cinema's most remarkable endings - a vividly edited and masterfully shot sequence where the public riot against (and are promptly put down by) the authorities for condemning their heroine to death. Meanwhile Joan burns in astonishingly brutal detail - resilient and faithful to her very last and this time fatal public humiliation. It's as sobering a conclusion as cinema has ever offered, with special effects that still look surprisingly real.

The film is famed for its frank close-ups - indeed, few films if any have managed to recapture the sheer intensity of emotion Dreyer manages in a near constant focus on faces (freeze-frame 90% of the frames in this film and you would have a beautiful, emotive portrait). In the absence of sound, directors could not fall back on the safety net of dialogue, emotive music or *shudder* voiceover (well, bar the occasional intertitle). Through the sheer cinematic force of Dreyer's direction, Passion is one of the finest examples of purely cinematic storytelling. All the expressions are represented through visuals alone - whether it be terror, disappointment or even a brief gleam of joyous hopefulness. But even apart from the iconic close-ups the film is full of inventive, still impressive cinematography - whether it's the tracking shots of the opening scenes or the disorientating and surreal compositions that help enhance the sense of dread, chaos and brutality in the film's unforgettable closing minutes.

The Blu-Ray offers stunningly clarity given the age and condition of the source material - minor scratches as is, but a helpful comparative special feature illustrates the massive restorative efforts that ensure the source material looks better than it has since its inception. The film benefits massively from 1080p presentation and the painstaking restoration job that has been conducted - if only all classic cinema was treated with the same care! The film and its several alternative versions hide a very complex history - elaborated upon in a fascinating, in-depth and lavish 100-page booklet included with this re-release, offering essays from the academic (Chris Marker, Luis Buñuel and others) to the practical & historical. It's therefore entirely appropriate that we are presented with a range of viewing options.

The optimal viewing format is suggested to be 20FPS with no musical accompaniment. I watched it this way, and it did indeed feel entirely fitting for a film with such sombre tone and pace (even if, alas, my house can never offer the fabled guarantee of perfect silence). However, Masters of Cinema recognise that the film has been seen by many people in many forms over eight decades. Therefore, the film is suitably also presented in 24 FPS version. Both frame rates offer separate optional musical scores - Mie Yanashita scores the 20 FPS copy in relatively traditional fashion, while the 24 FPS version offers a more 'avant-garde' score by Loren Connors. A fifth version is also included - an almost completely alternate version, using different takes after the original negative was supposedly destroyed. Dubbed the 'Lo Duca' version after the man who released and distributed this alternate print, this was for much of the twentieth century the most common version of the film until a print of Dreyer's preferred original cut was discovered in a psychiatric hospital closet (!). As you can see, you have plenty of viewing options.

Beautiful, haunting, moving, and - dare I suggest? - occasionally transcendent, The Passion of Joan of Arc is a powerful reminder of the power of the cinematic image. As pure as cinema gets, this new release is a wonderful opportunity to either discover or re-experience a film that genuinely, perhaps indisputably deserves its reputation as one of the greatest films ever made.
Posted by thecynicalgamer at 10:33 PM