Everything You Wanted to Know About Sex 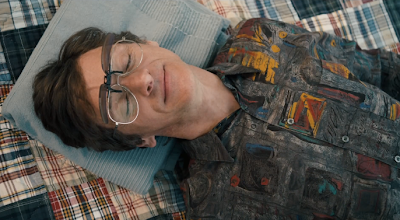 Films that tackle sexual matters in a frank yet appropriate manner are thin on the ground, but even thinner on the ground in ol' conservative Hollywood. While films containing scenes of extreme violence are given the thumbs up, the MPAA and such organisations ensure films that tackle a morally repugnant topic such as sex are consistently marginalised. It's a relief, then, to see a highish-profile production such as The Sessions approach the subject with genuine maturity and grace.

The film is based on the true story of paraplegic journalist Mark O'Brien's (played by John Hawkes) experiences with a sex surrogate / therapist Cheryl (Helen Hunt) as he tries to lose his virginity as he approaches his fortieth birthday. Hawkes and Hunt are absolutely magnificent here - physically and emotionally committed to their respective roles. Hawkes - in a vertical position throughout - plays O'Brien as a charming man with a self-depreciating wit, awkward when it comes to matters of the heart but refusing to let his disability get in the way of living life to the fullest. Hunt, meanwhile, convincingly portrays a professional who struggles to remain professional as she grows fonder of her lovable client.

Their 'sessions' radiate with a raw honesty and affection, and tackle potentially troublesome subject matter with great care and sensitivity. Their clothes may be off for significant amounts of the running time, but its all done in a tasteful and mature manner. Around the midpoint, the film threatens to transform into a more traditional rom-com as Mark and Cheryl grow more attached to each other, but to the film's credit - and, of course, in keeping with fact - it resists that temptation in order to provide more thoughtful yet still crowd-pleasing emotional catharsis.

Elsewhere, William H. Macy plays a priest to whom O'Brien confides in a series of amusing confessions. O'Brien also converses with several different assistants, with whom he forms various bonds (his unrequited love for one is a significant story catalyst). Cheryl struggles at home with her husband (W. Earl Brown) as she grows fonder of her client. The sessions may be the focus, but the ancillary material is sufficiently intriguing and charming. It does make some strange chronological leaps as it skips towards O'Brien's death in 1999 - while the narrative wraps up satisfactorily, the third act is much brisker than the laid-back pace that preceded it, which is a little disorientating. The film arguably could have used another five or ten minutes to achieve an altogether more relaxed ending.

The Sessions, on the whole, is pretty modest. Visually it lacks character, and there are times when it's too reliant on voiceover and the confessional sequences to get O'Briens POV across. It's more successful when the film doesn't directly verbalise his emotional state. More than anything this is an 'actor's film', and while writer / director Ben Lewin keeps things moving along in a sufficiently engaging and thoughtful way, it is the performances that truly allow the material to soar. That said, it's also unpretentious, amusing and sensibly crafted. Modest it may be, but it's also a modest success.
Posted by thecynicalgamer at 2:20 AM