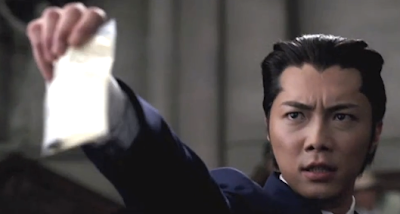 I have previously composed my thoughts on the continued failures of video game adaptations, but in essence the thesis boils down to two core points. The first is that they have been manhandled by incompetent creatives and studios - unfortunately few auteurs have yet braved the world of gaming adaptations. But more damningly is their farcical lack of allegiance to the source material. Adaptations of games, with a handful of exceptions, often bear little to no resemblance to the thing that they're adapting - perhaps a token character name here or there, but in many cases existing in entirely different genres. Those who aren't intimately familiar with gaming as a medium may scoff - and often do - at the idea, but game worlds, characters and stories can be rich, diverse and iconic. Film rarely, if ever, reflects that.

Takashi Miike aims to buck the trend with Ace Attorney - the cinematic version of a popular series of Japanese legal simulators. Excuse me: simulators is too strong word - Ace Attorney (perhaps better known as Phoenix Wright for some Western gamers, although also featuring many spin-off titles) is a cartoonish, insane take on legal action, featuring absurdist situations, characters and indeed a complete abandonment of traditional logic. Yet it's charming in its proud ridiculousness, with the very particular internal rules of the franchise coming together to provide a thoroughly entertaining journey through the world's most demented justice system. You're perhaps right to raise an eyebrow at how silly this all sounds, but with the help of smart, witty English language localisation the Capcom game has enjoyed continued domestic appreciation and cult international crossover success. The games, shamelessly odd though they may be, are a hell of a lot of fun.

It does not sound like the most obvious material for a big screen makeover, but it's actually one of the more standard developments for a franchise that has also enjoyed an all female musical stage adaptation. The frighteningly prolific Miike - who has previously also directed a screen adaptation of the popular Yakuza (Ryū ga Gotoku) series - has chosen to craft what is almost without argument the most literal gaming adaptation of all time. The production designers must have sworn an oath of fealty to the developers. The characters, for example, carry over the ludicrous hairstyles and costumes of the game series. Our protagonist has the spikiest hair in the history of live action cinema, while the franchise's infamously unhelpful judge is instantly recognisable through his improbable facial hair. These aren't even the most over-the-top characters the film offers up - it's bursting at the seams with fan service, with even the anonymous juries dressed in the most outrageous of garbs.

The story, meanwhile, adapts the first game in the series, although focusing on three out of five of the stories it offered (elements of the other two are integrated as required). There's a few absences here, a couple of alterations there, but the central arc is more or less intact. It's a convoluted plot, so I'm reluctant to even attempt a synopsis. What you really need to know is that - and I'm going to use the established English names of the characters here, as opposed to the original Japanese ones - Phoenix Wright (Hiroki Narimiya) is an up-and-coming, ambitious defense attorney. His rival is Miles Edgeworth (Takumi Saito) - a childhood friend who is now a prodigious prosecutor. When Wright's mentor Mia Fey (Rey Dan) is murdered, Wright successfully defends Mia's spirit medium sister Maya (Mirei Kiritani) in the murder trial. However, the murder trial inadvertantly re-opens an old case: and it's one Edgeworth is heavily involved with. It isn't long before the prosecutor ends up as the prosecuted, and it falls on Phoenix and new partner Maya to rush to his defense.

The film, like the game, is more or less a 50:50 split between investigative scenes and dramatic courtroom action (probably with a bias towards the latter). And, like the game, the film is at its most vibrant in the latter sections. The futuristic court of Ace Attorney's world is contrived to the extreme - effectively a verbal duel between the two lawyers, presided over by an elderly judge whose only concern seems to be reaching a ruling as quickly as possible (presumption of innocence be damned!). There's giant holographic evidence displays, an hilariously over-dramatic audience and even confetti and virtual fireworks when the verdict is announced. It is undoubtedly a hell of lot of fun, full of mad revelations and crazy reversals (many of which involve the world's most over-complex clock). The film is completely in-tune with its own lunacy, too: Akira Emoto's deadpan performance as the judge is note perfect, for example, while the film's - hilarious - climax of ridiculousness comes when a cockatoo is called as a key witness. Miike's visual delivery of this sequence is, frankly, inspired. The out of court stuff is perfectly serviceable, but cannot compete with the main event.

All of this is perhaps aiming at a very particular audience, and those unfamiliar with the franchise may well be left baffled by it all. An awkwardly paced opening ten-fifteen minutes is particularly likely to leave some left on the sidelines from the off. Buy into the film's utterly distinctive world, however, and it's all terrifically enjoyable as the silly, melodramatic and self-aware nonsense that it is. Not that it is in the upper echelons of Miike's filmography or anything - Audition this ain't. But he's having fun, and alongside the smart production designs exhibits an aesthetic verve that breathes life into what are very often limited settings (a near majority of the film is set in a medium-sized courtroom, after all).

The film is very often a success, then, and certainly in fawning debt to the game it is based on - this makes it perhaps the most successful gaming adaptation yet produced, and one of the first to have a talented director behind it. There are imperfections, though. Some will predominately irk fans. I know I was left underwhelmed by detective Dick Gumshoe (Shunsuke Daito) here: one of the game's most memorable comic creations, here miscast and underutilised. Indeed, a lot of the supporting characters do not receive the attention they deserve, even if most of the main players receive a moment or two to shine. Perhaps most disappointingly is the film's music. While the composer Kōji Endō heavily utilises the game's soundtrack from Masakazu Sugimori, the recordings and remixes feel limp. The music in the game often thrillingly added to the tension and mood of the court, particularly during the most dramatic climaxes. There's even been some wonderful orchestral albums released based on Sugimori's compositions - they are much more cinematic than the hollow soundscape on offer here. While those unfamiliar with the source material may be less bothered by such issues, the film's turgid prologue and often-times odd pacing (it's over 140 minutes long, and the film continues on during the credits) are causes for concern.

Yet mostly Ace Attorney is only rarely less than a good time: indeed, it's often wildly entertaining. It may not be Miike's masterpiece - although, given the inconsistencies of his vast filmography, it's far from the worst (this is the man who made the absolutely pointless Hara-Kiri remake, to name but one of his forgettable productions). It is a trivial, silly piece of work - that it has no pretenses of being anything else is what allows it to work, and its commitment to the madcap melodrama is perhaps the film's greatest asset. More than anything, it's the rare case of a video game being treated with such care by cinematic adapters. The consistently hyperactive delivery is unlikely to woo the many still confused by this whole gaming malarky (and, as much as I love the Ace Attorney games, they're not exactly the epitome of gaming art), but for those of us smitten with the hobby it's a rare relief to see our favourite characters and stories recounted with the utmost respect.

And yes, they do shout 'OBJECTION!' while pointing dramatically with welcome frequency.
Posted by thecynicalgamer at 9:34 PM