A Sun-Tribe Myth from the Bakumatsu Era 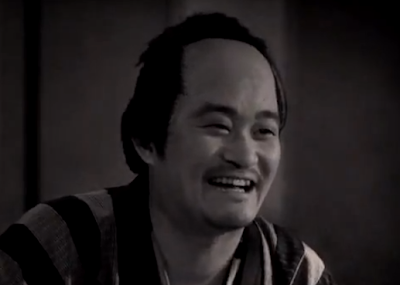 1862, the concluding years of the Edo Period. A famed brothel in Shinagawa. A sought-after courtesan handing out a multitude of marriage promises with nary a concern about the consequences. Her smitten clients. A daughter at risk of being sold off by her father. A frustrated servant trying to extract payment from a supposed big-spender. A group of samurai insurgents planning an explosive attack on the neighbouring 'foreigners' district'. A prostitute entering into a farcical suicide pact with a desperate book-seller. The brothel owners and their extravagant, playboy son. If this all sounds like the stuff of highest melodrama, luckily it's almost entirely played for laughs.

Although the film - co-scripted and art directed by the soon-to-be-brilliant Shōhei Imamura (Profound Desires of the Gods et al.) - initially seems nearly entirely episodic, but there's a pivotal binding agent in the form of Saheiji (played by comedian Frankie Sakai). He's the aforementioned 'big-spender', but in reality he's a 'grifter' (affectionately referred to as 'Mr. Grifter' for the second-half of the film) - he had arrived with friends, but sent them away, assuring them he can get out of paying their bill. In fact, he's going to take the owners, employees and customers for all their worth.

Saheiji makes for a hugely entertaining confidence man. There's a bit of Mifune's Sanjuro in Sakai's performance, dare I suggest - an impossible to dislike rogue agent that successfully conducts these insanely risky schemes through irresistible energy and charisma. Soon turning away cash (since he knows there's always a worthier gamble around the corner), he effectively runs the hostel by film's end. There's a sadness and loneliness to the character, no doubt - battling hypochondria and a fear of his own mortality, he lives life moment to moment (without ever forgetting the 'long game'), and ends the film alone. In a scene that is extremely muted compared to what came before, Saheiji trudges through the winter groundfrost to another site of exploitable debauchery. Despite these hints of darkness and deep-rooted uncertainty, he's a delightful individual to spend time with - a comedic tornado, effortlessly dominating the screen.

The brothel itself is an anarchic place with a rich sense of place and space, lovingly lent fresh life through a new Blu-Ray release from those glorious bastards at Eureka's Masters of Cinema label. Kawashima's multi-layered set is utilised to its fullest, with only a handful of scenes taking place in the snowy streets outside. A multitude of characters racing breathlessly from floor to floor and room to room. Those characters range from naive to cruel to outright hypocrites. There's an innocent soul or two too, their inherent goodness inevitably lost in this den of inequity. This is primarily a film of exaggeration, lies, manipulation and ignorance - and it works beautifully, never forgetting to invite the audience to laugh at the manic absurdity of events unfolding within the sliding doors.

There is, of course, a more-scathing layer of satire here. There's the underlying sense that these Edo-period shenanigans might not be too far removed from 1950s Japan - the hypocrisy, the shamelessness, the xenophobia. Much like Imamura's masterpieces that would follow, Japanese filmmakers of the post-war period had a knack for using 'less civilised' times to examine the issues plaguing their country post-war. Bakumatsu taiyo-den makes it more obvious than most, actually. In the film's most distinctly modernist and parodic move, a cheeky, playful prologue places us in mid-twentieth century Shinagawa, 'assuring' the audience that the film they're about to watch is in no way about the district's modern identity (and indeed the outlawing of 'courtesan' culture itself). There's little doubt, though, that Kawashima's intention is for you to take that advice with more than a pinch of salt.
Posted by thecynicalgamer at 10:02 PM