What Hosoda Did Next 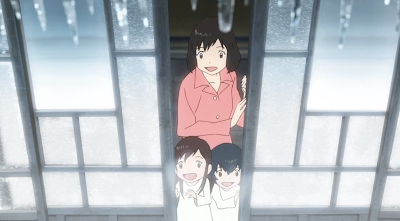 It is the rare director indeed that illustrates their mastery right out of the gate, as for most greatness is earned. This is very much the rule in Japan, where even the likes of Mizoguchi, Kurosawa and Ozu had a long career of semi-successful studio films behind them before they produced their masterworks. Mamoru Hosoda, too, had a less than audacious start, making his filmic debut directing two long-since forgotten theatrical entries in the Digimon series. After a One Piece film, Hosoda's breakthrough film (and to all extents and purposes his 'true' debut, stylistically speaking) came in the form of The Girl Who Leapt Through Time - a well-regarded film, although in this writer's opinion, merely a solidly decent one. Then came Summer Wars, and Hosoda's career went electric. I've composed my thoughts on that glorious feature before, and it has become one of my most rewatched films in recent times as a result of its radiant sense of joy and adventure. Mamoru 'The Next Big Thing' Hosoda had arrived.

I approached The Wolf Children Ame and Yuki, then, with enthusiasm but also trepidation - how exactly can a director follow up a film like Summer Wars? Incredibly, Hosoda's latest film is perhaps even more dazzling - an improbably beautiful, emotive, complex, amusing, entertaining and poignant work. It's the kind of film that justifies one's faith in not only animation, but indeed cinema itself. Not bad for a film whose inciting incident is a moment of human on werewolf intercourse.

That is indeed the unlikely setup: student Hana (voiced by Aoi Miyazaki) meets and falls in love with a guy (Takao Osawa) who transpires to be the last in a lineage of man/wolf hybrids. The couple end up having a child named Yuki (Haru Kuroki), who is soon gifted with a younger brother Ame (Yukito Nishii). Both, it goes without saying, are wolf children, and are able to shapeshift between their human and wolf forms. However, tragedy strikes when their father is killed while out hunting for food. Newly widowed mother Hana has her hands full with the kids, not yet able to control their unique transformation abilities. Unable to reveal their secret to the world, Hana has to keep her children more or less sealed inside, only venturing outside when its absolutely necessary. This insular lifestyle attracts the attention of nosy neighbours and, eventually, child welfare. Hana makes the difficult decision, then, to leave the city and go live in the comparative isolation of the countryside. There she hopes the two kids will be gifted the freedom they need, and eventually decide whether they choose the wolf or human way of life.

It does sound like a peculiar narrative when I put it that way, but what wonders Hosoda works! The film weaves an astonishingly rich thematic tapestry out of it all, as Yuki and Ame experience both the wilds of nature and the regiment of the classroom. There are sub-themes (the community's response to Hana and her children, for example), but the core this is a tale of parenthood told through the perspective of both parent and children. Hana is a strong-willed, fiercely independent protagonist - willing to upend her own life to provide the best possible life for her kids. She doesn't let hardship drag her down, instead painstakingly committing to learning to farm while working a low-paying part-time job. Through her, Hosoda reflects beautifully on the trials and tribulations of parenthood - not only the sacrifices, but also the joy. Ame and Yuki, meanwhile, represent Hosoda examining 'nature vs. nurture'. Initially, it seems as hyperactive, cheeky Yuki will embrace nature, while quiet, fragile Ame will identify his human self. Hosoda surprises us, instead dynamically exploring the way they grow up the course of a decade. This is a film about identity and the way we adapt to our environment, and it's a poignant, emotive tribute to the need for personal independence. This leads to some heartbreaking developments, but the final destinations are triumphant despite residual bittersweetness.

The characters are remarkably well defined and likeable - their actions and developments entirely credible. They do not serve the plot: the plot serves them, and that is genuinely invigorating. It's an absolute pleasure to experience their respective journeys, and although two of the three main characters may be werewolves, the film's deep-rooted humanity and compassion are major factors in the film's irresistibly.

The story is served by equally strong aesthetics. Hosoda has previously proven himself a master animator, and he further develops his visual identity here. Simply put, it looks spectacular: a vibrant colour palette, vividly realised characters & settings, and a confident blend of hand-drawn and CG animation. Everything sparkles with detail - from the old country house the family move into, down to the delightfully lively animations of Yuki and Ame transforming to and from their wolf selves. Dictatorially, Hosoda has also grown more confident. An early montage, for example, is framed almost entirely in distant wide-angle shots, which has a really strong effect on the emotional momentum and atmosphere of the sequence. Several pivotal scenes are set in gorgeous rainy forests, snowy hills and flowery meadows - a really nice visual motif given the characters' names translate as rain (Ame), snow (Yuki) and flower (Hana). A couple of scenes undoubtedly standout as giddy highlights, but the whole film is wonderfully coherent & consistent with barely a wasted frame or drawing. I cannot continue without also mentioning the glorious soundtrack by Masakatsu Takagi - an electrifying suite of compositions that perfectly compliments the film's boundless creative energy and sweeping emotional range.

A troublesome trend I reflected on in my review for Children Who Chase Voices from Deep Below is a critical tendency towards a pointless search for "the next Miyazaki". Luckily, while Makoto Shinkai does himself no favours in that regard, Hosoda is a director completely his own - indeed, both this and Summer Wars are almost incomparable to any other film, anime or otherwise. There are, however, a couple of pleasant homages to Miyazaki-san here, especially towards his great My Neighbour Totoro. There are some very vague similarities between the narratives of the two films (both feature a single parent raising their two young children in a new rural environment), although they're divergent enough in delivery to render comparisons almost entirely futile. Still, Hosoda acknowledges the debt surely all of the newer generation of animators owe to the Ghibli maestro, and there's one or two happy references here to Miyazaki canon - including a brief visual nod to the iconic rural bus-stop scene, and a late visit from a bear who could easily be one of the majestic creatures that graced Princess Mononoke.

But as I said Hosoda has developed into an auteristic tour de force - easily one of the most distinctive, ambitious animators working anywhere in the world. Wolf Children is not only an absolute pleasure to watch - it's basically the cinemagoing equivalent to snuggling up in a nice, warm bed - but it reinforces the stylistic accomplishments and peerless storytelling abilities of its creator. It's incredibly frustrating this the film is destined for mere cult appreciation - I'd recommend it to anyone without hesitation, and it would almost without doubt be warmly received by a very wide audience if it wasn't for the limited commercial prospects endured by anime.

That tangential note of cynicism aside, I can only wrap up by restating my utmost admiration for this unbelievably beautiful piece of animated cinema. It's the best new film I've seen in months, no question. It's an emotional rollercoaster that earns the viewer's joy, sadness and everything in between. It's a film of thematic depth, yet also endlessly entertaining - hilarious, adorable, thrilling, all in equal measure. It's a film whose richness of spirit instills every painstakingly crafted frame with life. Wolf Children Ame and Yuki is, in case you haven't guessed, a masterpiece.

Viewed at the Access Cinema Japanese Film Festival in the Lighthouse, Dublin
Posted by thecynicalgamer at 10:41 PM